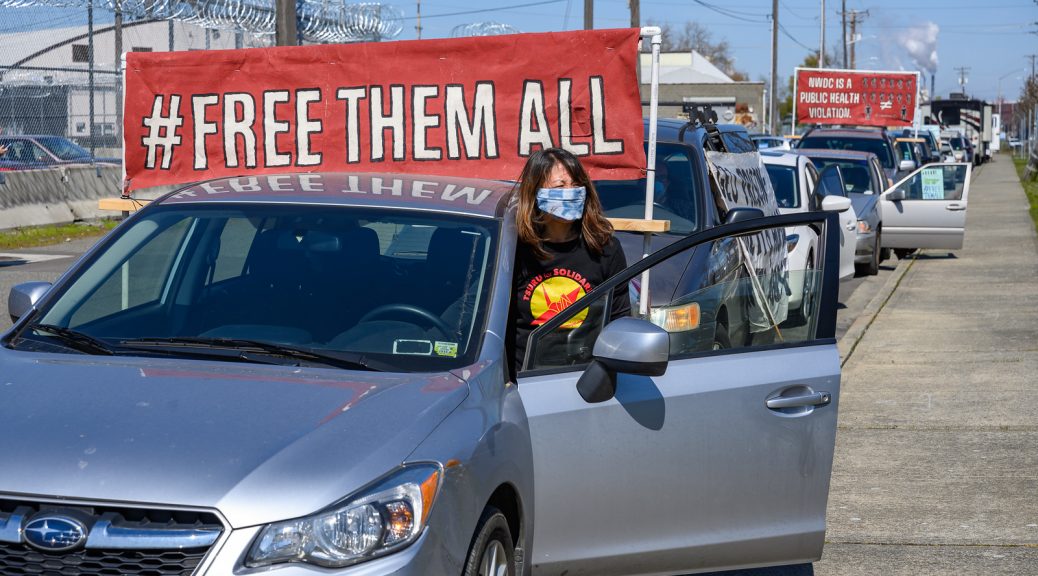 At precisely noon last Thursday, under quiet blue skies, a line of cars pulled up to the Washington Corrections Center for Women in Purdy and jolted the day awake. “Free them all! Free them all!” yelled protestors, honking their horns while maintaining a safe distance from each other. Bewildered guards stood by the prison parking lot as protestors shouted through a bullhorn, held protest signs out of car windows, and even blew a trumpet. Simultaneously, protests were also taking place in Olympia, outside the Governor’s mansion, and outside the Monroe Correctional Complex.

The coordinated protests were one of many efforts sounding the alarm for people behind bars in Washington during the state’s coronavirus outbreak. Just the day before, on Wednesday, April 15, immigrants detained at the Northwest Detention Center (NWDC) in Tacoma spelled S-O-S with their bodies while out in the yard to announce their third hunger strike in three weeks. There have been at least five community “honk-in” protests outside the NWDC during the stay-at-home order.

It has been months since the first known U.S. case of COVID-19 appeared in King County and weeks since Gov. Jay Inslee ordered Washington residents to stay home. “We do not accept preventable death in Washington,” Gov. Inslee tweeted on April 2. “Thanks to the commitment of individuals, families, business, labor and communities across the state, we are setting the bar and saving lives” he wrote. Now, government leaders and Seattle corporate giants (Amazon, Microsoft, Starbucks, etc.) are being praised for leading the way when it comes to flattening the curve.

But people who are incarcerated, their loved ones, formerly incarcerated people and activists tell a very different story about this state’s response to COVID-19. Their words puncture terrifying holes in the optimistic picture that government leaders and mainstream media are painting.

Prisoners and detainees report social distancing is impossible inside prisons, jails, and detention centers because they are “packed in like sardines.” Many do not have access to sanitary equipment like soap, hand sanitizer, and masks. They are being lied to about the coronavirus by staff and retaliated against if they report symptoms by being isolated in sick units, single cells, or “in the hole” (solitary confinement) where communication with the outside world is not allowed. Some are being conscripted to make masks and gowns for the public with no social distancing in their workrooms or being provided personal protective equipment themselves.

Last Thursday’s coordinated prison protests, in Purdy, Olympia, and Monroe were organized by COVID-19 Mutual Aid Seattle, a network of grassroots organizations that has been mobilizing for marginalized, vulnerable populations from the start of Washington’s outbreak. The coalition includes groups working to abolish incarceration, including La Resistencia, No New Youth Jail, Black Prisoners Caucus, and APICAG (Asian Pacific Islander Cultural Awareness Group). In a virtual press conference, family and community members shared stories and were alternately angry and desperate.

Cassandra Butler’s brother has been in lockdown for two weeks because the prison where he is incarcerated does not know how else to create social distance. Her brother is being punished for a public health threat that he did not create. “Prisons have been overcrowded for years and years and years,” said Butler. “There is no room. There was no room before this, there is no room now.”

Todd Sloan was one of the first inmates at Monroe to test positive for COVID-19. He has Crohn’s Disease and ulcerative colitis and takes an immunosuppressive medication. He was removed from his unit, placed in isolation, then denied his property, cleaning supplies, and access to medication. His mother, Lisa Dunlap, found out her son had tested positive on the news. Dunlap has not spoken to her son since early April but heard from prison staff that her son is okay.

“We want the right to monitor our loved ones and call 911 if they need an ambulance,” said Twyla Kill, crying after reading Dunlap’s statement during the press conference. Kill’s husband is incarcerated and has a compromised liver. “We want to know somebody believes them when they say they can’t breathe.”

America has the largest incarcerated population in the world. There are almost 2.3 million people locked away in U.S. prisons, jails, and immigration detention centers. Washington State alone has an incarceration rate of 480 per 100,000 people, a rate higher than many wealthy democracies around the globe. There are nearly 17,000 people incarcerated in Washington State prisons, which are operating at full, or over, capacity. People behind bars have to shower next to each other, eat close together, and are sometimes double or triple bunked in the same cells.

Experts and advocates have warned since early in the crisis that prisons, jails, and detention centers were ticking time bombs for COVID-19 outbreaks. Coronavirus thrives in cramped spaces with poor hygiene and incarceration facilities are infamous for overcrowding, unsanitary conditions, and subpar healthcare. Now, those warnings are being realized at dizzying speed. A week ago, Chicago’s Cook County Jail was battling one of the highest infection rates in the country. Two days later, Parnall Correctional Facility in Michigan surpassed Cook County. This week, 73% of inmates at Ohio’s Marion Correctional Institution tested positive for COVID-19, making it the biggest hotspot in the U.S.

People behind bars in Washington have known from the start they too are sitting ducks and that  their lives are at imminent risk, and this puts entire communities in jeopardy. However, state government and elected officials do not seem to know the same. Or just don’t care.

COVID-19 Mutual Aid Seattle organizers say without significant community pressure, they are dubious that Gov. Inslee, the Department of Corrections (DOC), and U.S. Immigration and Customs Enforcement (ICE) will protect incarcerated people. When the Governor is willing to lock down the state to safeguard residents, for instance, but is unwilling to care for the thousands of human beings imprisoned at prisons, jails, and detention centers, the message is clear. Those lives are not seen as equally valuable.

“If we didn’t mobilize, ICE wouldn’t even talk about it,” said Maru Mora, an undocumented community organizer and co-founder of La Resistencia, a grassroots group fighting to end all detentions and deportations in the state. “We know they’re hiding information all the time.”

“It’s been more than a month since the pandemic hit, but the DOC is so slow to respond,” said J.M. Wong, a community organizer with COVID-19 Mutual Aid, member of the APICAG family, and co-founder of Parisol, a Chinese and Chinese-diaspora solidarity organization fighting for change. “DOC is perpetuating COVID-19 spread.”

The recent outbreak at Ohio’s Marion Correctional Institution was only discovered after mass testing of everyone in the prison, including staff. In Washington, the number of infections among people in the state’s cramped and unhygienic prisons, jails, and detention centers is unknown because incarcerated individuals are mostly not being tested.

Mora said doctors at NWDC have been lying to detainees about testing them for COVID-19.  Immigrants inside the detention center told her that doctors “would swab their noses, go into a room, come back 10 minutes later and say it’s negative.” It is a blatant lie, Mora said. “They don’t have the capability to do a test in 10 minutes. I asked other doctors. Only specialized labs can do that.”

In Washington prisons, “The only form of testing they seem to be doing is taking temperature checks,” said Xing Hey, a member of APICAG who is also working with COVID-19 Mutual Aid. Xing Hey was formerly incarcerated at Monroe and now supports people inside prisons by receiving updates and connecting incarcerated APICAG members with media to tell their stories. Inmates have told Xing Hey that people are only being transported out to local hospitals for testing if they show extreme symptoms.

This lack of testing among Washington’s large and vulnerable incarcerated population throws into serious question the accuracy of released Washington State COVID-19 data thus far. How can officials confidently report daily Washington case and death counts if one of the state’s largest at-risk populations is not being tested? Further, how can officials claim public safety is well in-hand when thousands of people are being so grossly neglected?

Inside prisons, jails, and detention centers there is a lot of distress, worry, and anxiety. With the drastic lack of testing and no transparency, said Xing Hey, the fear among incarcerated people has become, “Who has it and who doesn’t?” Wong agreed, saying, “We’ve been getting emails from people [inside]. People are really scared, having panic attacks, and then they’re getting pathologized.”

Mounting fear and desperation have led incarcerated people to take matters into their own hands in whatever limited ways they can. On April 8, incarcerated individuals at Monroe were the first U.S. inmates to protest lack of COVID-19 protection after multiple inmates and staff tested positive for the virus. Shortly following, individuals incarcerated at Cedar Creek Corrections Center in Littlerock, WA also protested peacefully.

In a televised press conference on April 9, Stephen Sinclair, Secretary of the Washington State Department of Corrections, responded to Monroe’s peaceful protest by saying the inmates there were not being cooperative. On the same day, Columbia Legal Services filed an emergency motion to protect inmates from COVID-19. The State Supreme Court ordered Gov. Inslee and the Department of Corrections to respond.

On Monday, April 13, Gov. Inslee announced at least 950 inmates would be released early to prevent the spread of COVID-19. That number has since grown to 1,100. The announcement, however, came only “after weeks of pressure by the community, a lawsuit, an outbreak at one of the prisons, and being ordered by the court” said Nick Allen of Columbia Legal Services at the  April 9 virtual press conference. Allen believes it does not go far enough. The release will amount to a rate of as little as 91 people for each of Washington State’s 12 adult prisons. “What is that going to do?” asked Kill. “It’s not even going to be noticeable and it’s not going to provide social distancing anywhere.”

To save lives, drastic times call for drastic measures, said Wong. Incarcerated people, family and community members, and organizers are asking for the release of all imprisoned individuals immediately to drastically slow the spread of COVID-19, starting with people who are medically vulnerable. Columbia Legal Services filed a lawsuit against the Governor and DOC in March, which is scheduled to be heard April 23 before the State Supreme Court. “All cages should be shut down,” said Mora.

In the meantime, though, said Wong, “Being in the prison right now during the pandemic is like a death sentence.”

You can support the thousands of incarcerated people in Washington by following COVID-19 Mutual Aid Seattle, No New Youth Jail, La Resistencia, Black Prisoners Caucus, APICAG, and No New Youth Jail on social media. Participate in the many calls to actions that are announced online by these groups. Donations are also always welcome and appreciated.

The hearing Thursday, April 23 at 9:00 am can be watched online at TVW.org.

Sharon H. Chang is an activist, photographer, and award-winning writer. She is the author of the acclaimed books Raising Mixed Race and Hapa Tales and Other Lies. She lives in the Columbia City neighborhood.