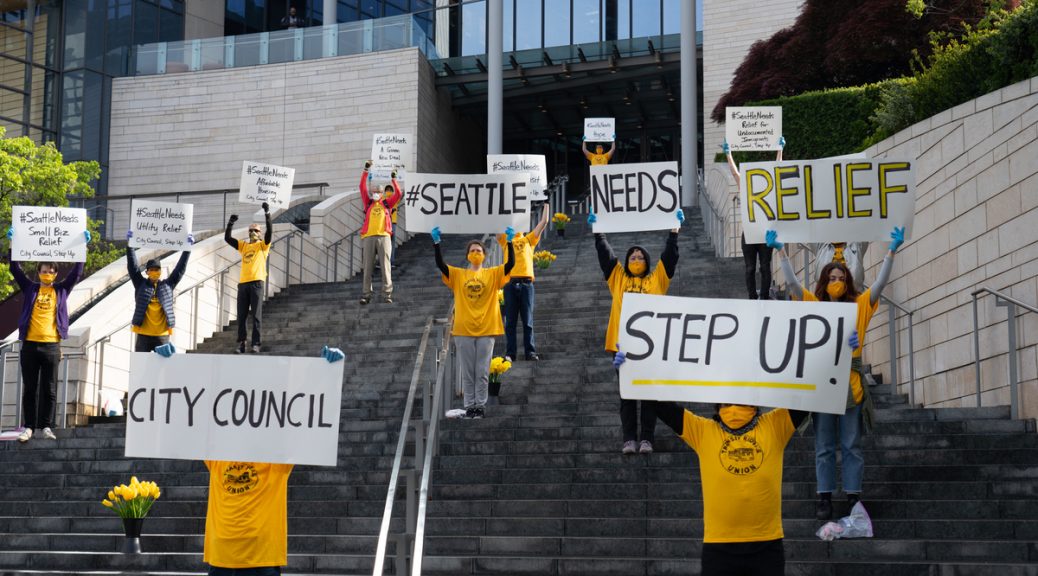 Members of the Seattle Transit Riders Union and other demonstrators gathered in a socially-distant protest outside of City Hall on Wednesday, April 29, to advocate for widespread economic relief amid the coronavirus pandemic.

The protest came a few hours before a Seattle City Council budget meeting in which city council members discussed housing loans, cash assistance for low-income households and the development of permanently affordable social housing. They also considered the highly controversial payroll expense tax, which would impose a 1.3% tax on Seattle businesses with payrolls of $7 million or more annually.

“This pandemic has made it clear that big business is still making money while everyone else is suffering,” said Tye Reed, a field organizer for the Transit Riders Union who spoke with the Emerald following the protest. “Therefore big business needs to be taking on more of a burden of caring for our city.”

Reed works as a housing case manager and says that the existing rental relief provisions are not enough to provide for Seattlites, many of whom have found themselves without work and no way to pay rent.

“For me it hits home every single day. I’m going to go from work after this and I’m probably going to tell 50 people that we don’t have money for you and you need to figure out how to pay May’s rent in a couple days,” Reed said. “I’m gonna be honest, I’ve been really depressed.”

Another protestor, Kyle Hartmann, a core organizer for Seattle Independent Artist Sustainability Effort (SIASE), said that the pandemic has served to highlight already-existing inequalities in Seattle and that residents are in need of immediate relief.

As of 2018, Seattle had the third-largest homeless population of any major city in the U.S. Since the onset of the pandemic, more individuals without homes are riding buses as a means of shelter, according to Katie Wilson, the General Secretary of the Transit Riders Union, in comments to city councilmembers at the budget meeting on Wednesday.

In addition, because most public spaces are closed, individuals who are homeless are finding it difficult to charge their phones or access the internet in order to reach medical providers, according to the union.

“No human being should be without shelter, food, medical assistance, or any other necessity before, during, and after this pandemic while the wealthiest person in the world profits off of a crisis and big businesses spend money on advertisements claiming charity when that money could be going to the people who need it the most,” Hartmann told the Emerald in an email following the protest.

Hartmann echoed the call for a big business tax that would turn corporate profit into social services in order to provide for those less fortunate.

“In a city filled with immense wealth and corporate power, we must demand transparent accountability from those with vast financial and political capacity in order to support our community as a whole,” Hartmann said.

In the city council meeting following the protest, many Seattle community members focused on the payroll expense tax and what it would mean for the city.

Some argued that the tax would ultimately harm smaller businesses and not just larger corporations, echoing an idea expressed by Seattle Times columnist Danny Westneat in an opinion piece that claims that the $7 million-plus annual income minimum meant the tax would apply to most for-profit businesses in Seattle with 100 to 150 employees.

Individuals representing the other side of the debate specifically referenced Amazon when referring to big businesses in the Seattle area, with some community members noting that the corporation’s stock price has surged amid the pandemic, due to social distancing measures and a greater reliance from consumers on online ordering.

While activists from groups such as the Transit Riders Union and Seattle Democratic Socialists of America have strongly advocated for the payroll expense tax, Mayor Jenny Durkan, in an interview with KUOW on April 23, said that the new payroll tax would not help the city cope with an estimated $300 million tax revenue shortfall due to the pandemic.

In the interview, she reasoned that the money couldn’t be collected until the year 2022 and that there would be no way of distributing funds from the tax to those who need it this year.

“So the payroll tax has no ability to plug any hole in what we are facing this year or next year.” Durkan said. “And there’s no mechanism by which you can generate money to send checks to people or get funds to people this year.”