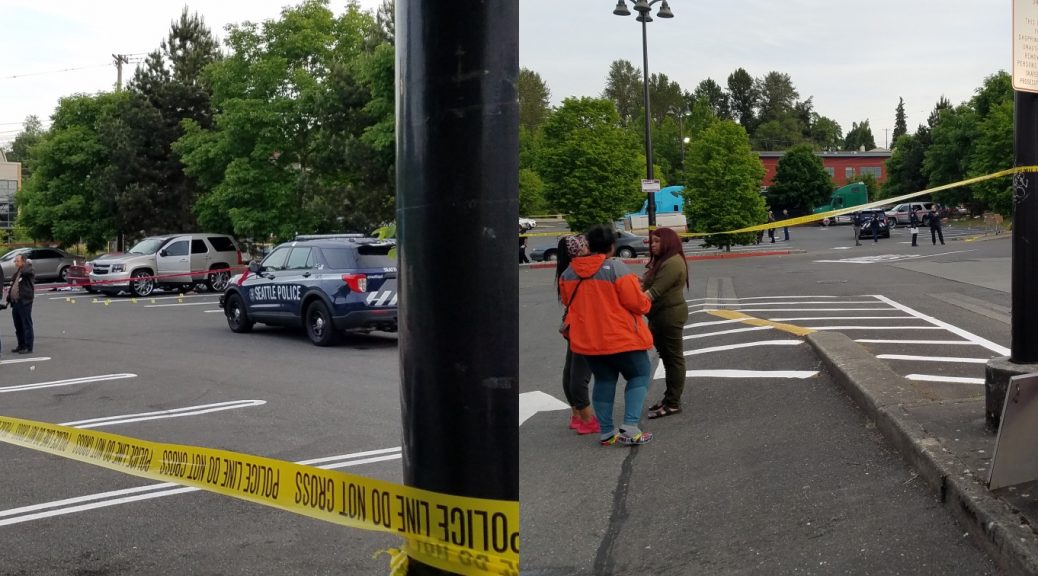 At 6:20 pm on Saturday, May 23, two young men were shot in the Safeway parking lot in Rainier Beach. Within two hours, both were dead.

Detective Mark Jamieson, of the Seattle Police Department, said the following during a brief press conference at 7:54 pm, later that evening:

“We are investigating a shooting that started out as a disturbance in the parking lot, Safeway. There was a large group of people gathered in the corner behind me [adjacent to the Beach Veterinary Hospital]. At some point, there were shots fired. Everybody fled at that point. There were two victims that were still here at the scene. Seattle Fire responded. They transported two adult males with life-threatening injuries to Harborview. Unfortunately, both those victims were declared deceased by the hospital.”

At this point in the detective’s briefing, a close friend or relative of one of the victims let out a heart-breaking scream and then grew angry. Apparently she’d been asking other officers for info and was just now finding out about her loved one, as the detective briefed the press.

Consoled by a friend, she shrieked: “They don’t tell you shit, but they can tell the whole world!”

Detective Jamieson continued, unfazed, “When it happened, everyone fled. So that’s what detectives are tasked with doing right now, trying to track down that information…We will work with the families and we have victim advocates in the department.”

Given the amount of distress in the parking lot, with people close to the victims (including a mother of one of the victims) wailing intermittently, the atmosphere was harrowing. Large crowds stood around discussing what had just transpired, many pensive, most wearing masks, but no one was willing to speak on the record. One woman who was at the scene mentioned that she’d performed CPR on one of the victims, but said that she couldn’t say anything. Her husband, sitting in a car nearby mentioned that he wouldn’t want his wife to speak with the media for fear of possible retribution if people who knew the shooter were still in the parking lot.

Erin Goodman, Chair of the South Precinct Advisory Board, feels as though Rainier Beach Liquor and Wine is at least partly to blame for past shootings that occurred in the Safeway Parking lot, and points to a petition to the liquor board that many community members are supportive of.

In a January 2020 letter to the Washington State Liquor and Cannabis Board, Goodman wrote in the petition, “Rainier Beach Liquor and Wine shares a parking lot with the only grocery store remaining in Rainier Beach. Their failure to operate the business in a responsible manner in accordance with the law and LCB (Liquor and Cannabis Board) policy puts the entire neighborhood at risk, and negatively impacts residents who must enter the area to buy groceries.”