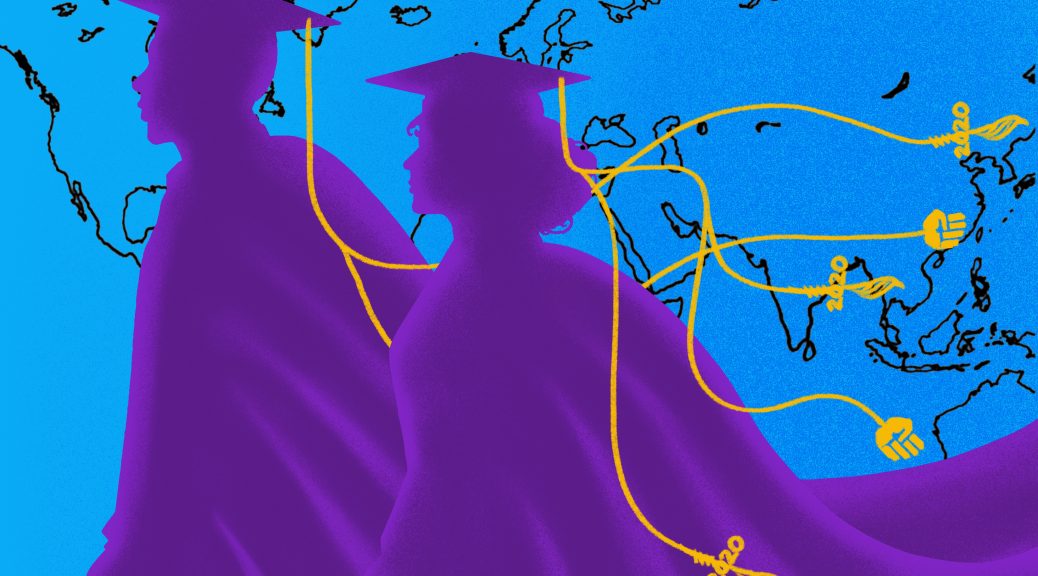 Graduates, I wish I could tell you to count yourselves lucky today.

However, I can’t pretend the future is imminently bright and this world will default to justice and peace as long as you work hard, hope, and align with our society’s current notions of progress.

Over the last few months, those dictums have been revealed for the fables they are, unconcealing, for some of you, a world teetering on the knife’s edge of despair.

But though we currently find ourselves shackled to a rollercoaster of uncertainty, we can still force a brief halt to pause and reflect on attainments both realized and desired.

You’ve just spent years, whether through intention or inertia, dedicated to becoming something other than what you were. Changing, growing, and evolving right along with our world, all while attempting to find a place for yourself in it. You’ve exhibited an impressive amount of discipline and creativity by designing your own academic path, especially in times like these.

And I’m sure I don’t have to tell you in this day and age, or any day and age, how hard trying to change this world is. Much harder, though, is attempting that feat without losing the vessel you’ll need to change it: namely, yourself.

That’s why today, future leaders, when you’re expecting a series of platitudes demanding you seize the day, reach for the sky, realize the impossible dream, and all the other cliches you’ll be bazooka-blasted with upon opening your congratulatory graduation cards, I have none.

Instead, I offer truth. And though truth owes us no solace, it can sometimes prompt change. And if this last decade in movement and social justice journalism has taught me anything, it’s that radical self-honesty is the best source of fuel for the work we must do to help shift this planet’s fortunes.

Like many of you reading this, I had a thirst for leaving the world a better place than the one I was born into.

Other than personal torment thanks to an internal war between doing the right thing and the most lucrative, that was the reason I abandoned the world I’d joined after college — one of moneymaking for the filthy rich and their grossly inflated salaries — to barter my soul back and embark on a career in journalism. I was inspired by Plato’s axiom that storytellers rule the world, so they are best positioned to change it.

What most needed changing at the time were perceptions about the part of the city I grew up in: South Seattle.

It was at one time the most diverse zip code in the United States, with over 57 ethnicities and 88 languages spoken. It was also one of the poorest areas in this big, rich town. Media coverage other than crime and high school basketball was non-existent.

Cutting my teeth at a small paper, one of my first assignments was asking residents of South Seattle to share positive experiences about their home. I ended up speaking to a young man who had barely scratched 19. I asked him to highlight what he felt was good about our community.

Eventually, I asked him why he felt that way. He said it was because “they never say anything good about us. We’re always drug dealers. We’re always gangbangers. Our lives don’t matter.” He was talking about the media.

Emphasizing pain and tragedy, those stories had come to define his community. I told him that I was here to tell a different one. He said he “hoped so,” but he couldn’t see it happening.

We parted ways, and I never saw him again, because a little over two weeks later, he was found about a mile away from where we met, dead with a gun in his hand and a bullet in his chest. I still don’t know why, or what he died for, other than it all being senseless and avoidable.

I frequently wish I would’ve said something more to him. I thought maybe if he had something to change his mind about himself and his home, maybe it could’ve changed his destiny.

That something became the South Seattle Emerald, this six-year-old publication which continues to magnify its community’s nuances, intricacies, and gradations.

The mantra of journalism has long been that it exists to speak truth to power. And as much as I bought into that then, and still do, I thought its superior purpose was speaking truth to those who believe they are powerless and reminding them that they are not.

And so for the next six years, we hoped to tell a different story in South Seattle and POC communities that might not only change hearts and minds, but policies and lives.

We hoped to demolish every -ism and social phobia from ableism to racism to sexism, from anti-semitism to transphobia and homophobia. And we’d do it by showing how these fears and bigotries seeped into and operated within the everyday structures of society.

Starting with nothing but dwindling savings and a room in my parents’ home, we fought to do just that through grueling 20-hour workdays, seven days a week — barely surviving off $500 in a “good” month. Those jokes about being 30-something and living in your mother’s basement became a lot less funny because that was my life.

It was a life of perpetual sacrifices for others not named Marcus. One of perpetual fighting as a champion for those who couldn’t or wouldn’t speak up for themselves because society had muffled them. One of perpetual neglect of a life outside of my social justice work.

I found myself fortunate enough to be immersed in the company of changemakers, thought leaders, and social justice warriors (I don’t use that phrase pejoratively) who could inject bursts of hope and inspiration into crowds and influence policymakers.

I just as often encountered people with eyes locked on a better world, but who had lost sight of themselves as human beings, pressured to live up to some hero status, glorified beyond reality.

There were many — too many — civic and community leaders who experienced a planet-sized void in their lives. When you stripped away their function, their title, and their reputation, there was nothing left for them to identify themselves. Nearly dehumanized by playing the role of local messiahs, they couldn’t assess their own worth. It’s what happens when you give yourself away and keep giving until there’s nothing left for you.

This isn’t only second-hand knowledge I’m sharing, though. This is also a personal experience. Because after years of running on fumes just to keep pace with the work of bringing light to the world, I ended up at the darkest point of my life.

It was the result of having no breathing room between my aspirations and my identity. I leaned heavily on alcohol, abusing it and other drugs, and became suicidal at one point, all in an attempt to flee from a bipolar diagnosis. The idea of failing to live up to what others expected of me filled my mind with terror.

I’m now nearly two years into recovery from alcoholism and am steadily rebuilding my life from that attempt to end it. I’ve realized how little regard I’d given to the voice inside of me telling me that self-nourishment was not selfishness and that part of believing in a better world is actually taking time to enjoy, reflect, and pay witness to how you choose to live in the one we have.

Underneath its unrelenting frenzy, the world offers stillness. That stillness can be used to probe deeply into undiscovered regions of ourselves. And what you’ll most likely uncover is what I did: not a savior placed on some pedestal surrounded by unattainable expectations, but someone this world is more desperately in need of: you, along with your awareness, your foundational values, and your capacity to do all you can do for the betterment of our society — but not more.

You’ll find someone who should never be elevated to perfection because of your work, nor down to inadequacy because of your flaws. You have to exist in the space between the two — fully human, faltering, committing errors, and owning your mistakes. Purpose can be an enhancement, but never a substitute for self-worth.

So, in all your pursuits, don’t build up others at the cost of destroying yourself. Don’t seek societal salvation through the tool of self-destruction. Harder than individual sacrifice is a duty-bound commitment to the arduous process of societal improvement, forged from shared visions, possibilities, and responsibilities for one another as well as yourself. Such a vow replaces self-worship with self and social assessment.

Refrain from grand declarations of wokeness for all the world to see; go about the day-to-day business of chipping away at them without acclaim. That is durable. That is replicable. It’s also essential to steer this swiveling marble away from its current course.

This world, as you know, is in critical need of an altered path. It’s crying out for a new way of imagining life.

This world is not yet just when it has more black people locked in jail now than were slaves before Emancipation. This world is not yet fair when 26 people possess more wealth than half of the world’s population. This world is not yet compassionate when we continue to poison our oceans and our air, leaving future generations to suffer the consequences. No, this world is constantly engaged in acts of hate, in the exploitation of marginalized classes and the oppression of the vulnerable by fraudulent authorities — always claiming superiority above, not similarity alongside them.

I’m certain that comes as no shock to you.

This world needs you. And I do mean it needs you.

It needs you to seek change, not as a proxy for your authentic identity, but as an obligation of service to those who came before you and will continue living after you. It needs you to rest, recharge, and renew yourself, knowing there are others doing this work, too. It needs you to seek knowledge of what you don’t understand and for you to know that you will never outpace the work needed to be more loving, more accepting, and more empathic. It needs you to be fully human: never perfect, yet improving.

And so, today, Class of 2020, I have no luck to offer or hope to give. Instead, I have much to ask of you in the days ahead.

I ask that you examine any system of authority devaluing the many for the enrichment of the few and that you ask not for an apology for its existence, but a wholesale transformation of its enterprise.

I ask, in this interconnected web of humanity, that you never allow one strand to dominate the others, so as to avoid our inevitable unraveling. I ask that you find your truth in life, impervious to bombast and enmity and that you stand in it unshakably.

And I ask that you continue to know, love, accept, and learn about yourself, just as much as you do this ever-shifting world. I ask that right now when you face a time like none before, you find fertile minds where understanding, openness, and human reciprocity are blossoming like never before — and that you join them. And though it will take time, with an arrival date different for everyone, I ask that you someday find yourself, as I do today, equipped to endure all that life has in store for you.

May your answers change our world.

Congratulations, Class of 2020, on this day and all the days you’ll live.

Marcus Harrison Green is the founder and publisher of the Emerald, and a columnist for Crosscut. You can follow him on Twitter at mhgreen3000 and reach him at marcus@southseattleemerald.com.