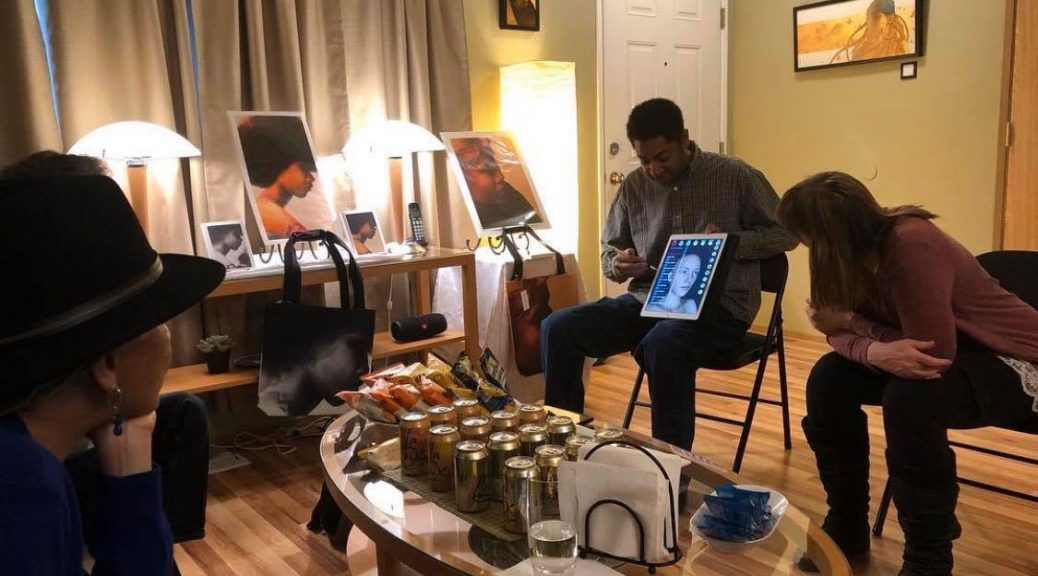 When third-generation visual artist George Jennings arrived in the Puget Sound area in 1997, he came with his grandfather’s small drafting table and a vision to transform his passion for art into a viable business. He and Nakeesa Frazier-Jennings, his wife and business partner, hoped to continue the Jennings’ family art legacy that began with George’s maternal grandfather.

“Before we moved to Seattle, when we were dating, I got a chance to meet his family. At the time, his grandmother was still alive. She was, I think in her eighties,” Nakeesa said. “Her house was filled with his grandfather’s work that I thought was really beautiful. His grandmother would show us interviews of her husband and herself that the local news would do with them from time to time … And I just always felt sad that this Black man who was so talented did not receive the recognition that I felt his work deserved. Though he has some pieces in the Smithsonian and posthumously his work was included in a traveling exhibit of the hundred best self portraits in America or in history … I just really felt like if George wanted to try to get his work out there that I wanted to help this particular Black man do that and kind of fulfill their family’s art destiny and continue that legacy.”

As I spoke with the Jennings about that legacy, George fondly remembered being taught the craft by his grandfather and watching others in his family receive the gift. Even as he took various day jobs and at one point joined the Air Force and the Secret Service, he continued to practice his art. But when he and his wife moved from Washington D.C. to the Puget Sound area that resolve to build a career and a business deepened. George would create paintings and Nakeesa would get them framed. Eventually they began to make prints and greeting cards and sold his artwork at art fairs and a local tea shop where Nakeesa worked. They had very high standards — the quality needed to be top notch. But in the beginning almost everything was a bootstrapped, DIY affair.

“We would go to Michaels or JOANN Fabric and get the supplies, and we would print out our own cards and glue-stick them together and seal them in the bags. And we made our own prints the same way and put them in mats,” George said.

But the Jennings family wasn’t content with bootstrapping everything, because it didn’t create the level of quality they preferred. Eventually they employed professionals to make sure that the quality of the framing and printing met their high standards. And that commitment to high standards seems to have paid off. George Jennings is slated to exhibit his work at the Northwest African American Museum (NAAM) in 2022.

“I’m going to be creating 24 pieces. They’re going to be large-scale, four feet by five feet, all women of color,” George said.

His women of color pieces are digital works that will be printed on acrylic and aluminum. But as we talked about the big show at NAAM, I could feel a little apprehension in his voice — would the NAAM show happen and would it happen as he envisioned it?  How would the novel coronavirus impact his art career? He opened up about his feelings.

“Well, I guess the first thing is fear,” George said. “The fear that things won’t return back to the way they were. I have that planned show at the Northwest African American Museum two and a half years from now, which, you know, on one hand I thought it was pretty far off. And then when this happened. Now I’m thinking either that may not ever happen, that it may be pushed back or that it will be fortunate for me that it was two and a half years off. I just wonder, are we going to have crowds because every artist at their first big art show is hoping to have a great opening night with crowds of people. But that may not be possible in the near future.”

Even as uncertainty looms, George and his wife embrace a glass-half-full attitude. Since they can no longer depend on promoting George Jennings Art at physical galleries and museums, they’ve adapted — they’ve gone virtual. Nakeesa is taking the lead to build a virtual gallery where George can showcase his work in live-streamed studio tours on Facebook. Their first show was in April.

“I think it was a decision that should have been made earlier on, but you know, starting out, we were still playing the same art game that every other artist had played up until that point,” George said of his decision to take his art online and leverage social media. “I think the biggest thing for me is that I was not very enthusiastic about putting myself out there as far as social media or anything like that. I’m still not comfortable doing it because I know that it doesn’t come off as polished as I wish it would.”

But it wasn’t just George’s concerns about polish that gave him pause, he also felt shy about something else. “When you’re doing social media, you’re not just selling your art, you’re selling yourself … I’m not that type of person,” George said. “I’m not trying to make you purchase anything or like anything because you like my personality or something like that. So that’s really difficult for me. I want my art to stand on its own.”

Nakeesa gave a knowing smile as George spoke of his apprehension. “We are almost polar opposites when it comes to that because we want to be real and we want to be authentic and, you know, share what it’s really like,” Nakeesa said as she described the importance of opening up and letting people get to know the person behind the art. “A lot of times people will be introduced to you or be introduced to your work through their interest in you.”

Featured image: George Jennings shows off one of his pieces during a private exhibition at his home late last year. (Photo: Nakeesa Frazier-Jennings)