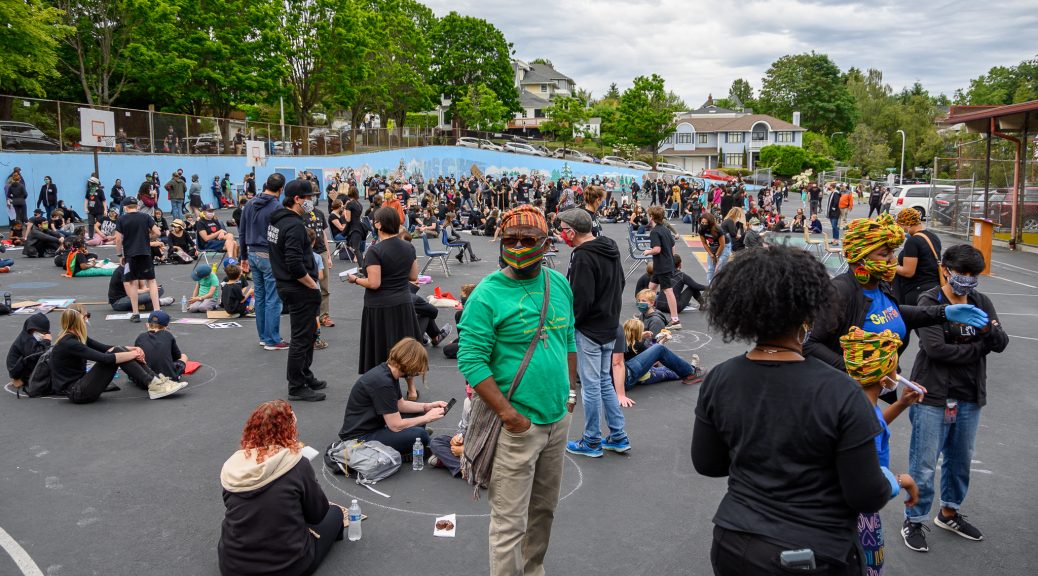 Hundreds of families turned out for a moving Black Lives Matter vigil at Leschi Elementary Friday afternoon to remember George Floyd, Breonna Taylor, Ahmaud Arbery, and so many other Black lives lost to police violence. Families came not only from Leschi Elementary, but also Bailey Gatzert Elementary, Thurgood Marshall Elementary, Meany Middle School and Washington Middle School. Parents and children filled the schoolyard, holding protest signs while wearing black clothing. Others, who needed more social distance, stood by the fence or sat in cars parked all along Spruce Street.

“We put it on social media, and it blew up,” said organizer Gerald Donaldson, who has been a Family Support Worker and pillar of the Black community at Leschi Elementary for 27 years. Donaldson said many families have been wanting to protest but have been struggling to find child-friendly events. “A lot of people have been saying they’ve been meaning to get out,” Donaldson said of the vigil at Leschi Elementary. “This was the safer place and it was a safe haven, close to home.”

Leschi Elementary’s big schoolyard provided lots of space to spread out. White chalk bubbles drawn on the ground, spaced 6 feet apart, showed family clusters where to sit. Free donuts, snacks, and bottled water, donated by the Salvation Army, were handed out by volunteers in masks and blue gloves. Signs and event programs reminded protestors to keep on their own masks and sanitize. Because the event was a vigil, not a march, parents did not have to worry about trying to get young children to keep a safe distance from others in a big moving crowd.

The idea for the vigil came from Leschi Elementary teachers Danielle Woods (Kindergarten-1st Grade) and Kaitlin Kamalei Brandon (2nd-3rd Grade) early in the week. Together with Donaldson, the three organizers managed to pull off the event in a matter of days. Donaldson helped organize the program and speakers. “We wanted people to be able to not have to walk, just listen to a program,” said Donaldson. “It was fantastic.”

At the vigil, Donaldson and Leschi Elementary Principal Lisa Moland gave opening statements. Gerald Donaldson spoke about how careful he has to be moving through the world as a Black man, and how he had to raise his now adult children to be careful in the same way. Moland spoke painfully about the sudden school district announcement that she is being removed from her new position at Leschi Elementary after only six months.

Former Leschi Elementary student, Savannah Blackwell, sang a beautiful rendition of “We Shall Overcome” and issued an important reminder to the crowd. “I just want to honor that today would have been Breonna Taylor’s birthday,” said Blackwell, who currently attends Franklin High School. Taylor would have turned 27 Friday, June 5 and thousands gathered across the nation to honor her memory.

Delbert Richardson of the “Unspoken Truths” American History Traveling Museum was a guest speaker. His well-known museum brings rich African and African American history into schools by exhibiting both joyful cultural relics and painful artifacts of oppression. Despite admitting he was exhausted yesterday, Richardson was still a dynamic speaker at the vigil. “Who is Black?” “Who is Indigenous?” “Who is Latinx?” “Who is white?” “Who is Asian?” he asked energetically. As different people raised their hands, Richardson yelled in response, “I see you!”

The floor was then opened up to the community. Parents, staff, and Leschi Elementary alum took turns on the mic. Some were passionate, some angry, some in tears.

Ms. Mary of Space Between, who taught yoga for Leschi Elementary staff of color this year, led grounding and breathing exercises. She asked attendees to close their eyes, take deep breaths, spread their arms like wings, and give themselves comforting hugs. Place one hand on your throat and one hand on your chest, she directed, to help feel your breath and feel your heart.

In closing, Shedric Johnson gave eulogies honoring George Floyd, Breonna Taylor, Ahmaud Aubrey, and the countless Black people killed by police violence. Leschi Elementary staff held candles with flames and families held battery-powered candles while observing a moment of silence in memory of the lives lost. Then, Elijah Moyo led the hundreds of families in loud chanting with drumming. “Whose lives matter!?” he repeatedly called out, to which the crowd answered, “Black Lives Matter!!”

The unison chanting by hundreds of families moved Donaldson deeply. “Everybody was there, and it seemed like it got louder and louder,” he said. “It was powerful.” As the vigil wrapped up, Donaldson said he looked around and felt really good. Seeing so many Leschi families and community members come together to support the Black Lives Matter movement gave him hope that all people are starting to understand the importance of fighting for racial justice. “I left the vigil yesterday,” said Donaldson, “and driving home–I was smiling.”