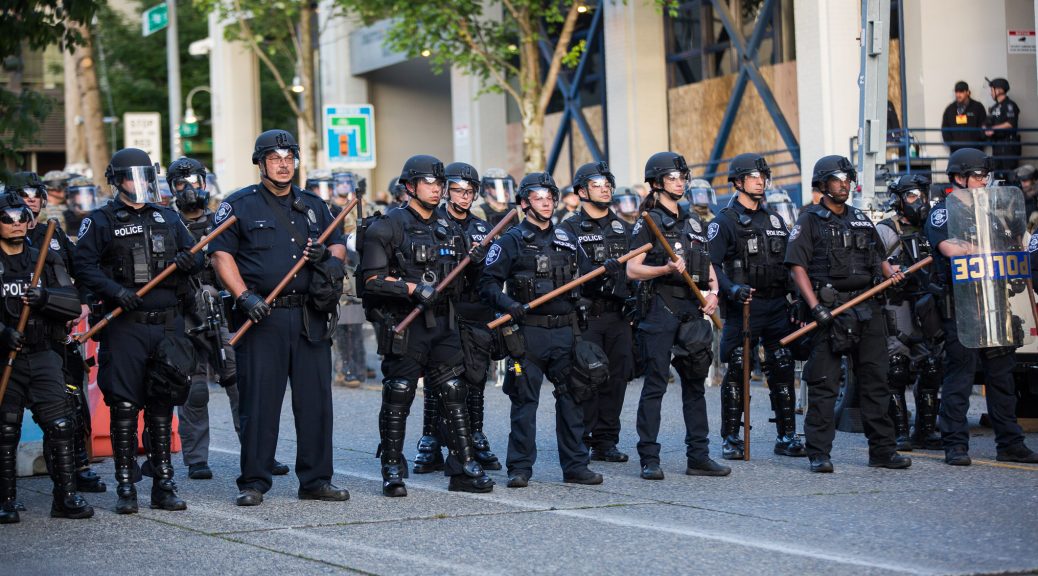 A young woman was reported to have almost lost her life in last night’s protests on Capitol Hill after Seattle Police Department (SPD) officers allegedly threw several flash bangs into the volunteer medic tent in which she was being treated for a chest injury from “a police projectile” — delaying treatment by attendant volunteer medics, according to one of the street medics who said they had been attending her.

The medic who posted the original report on Reddit said that the young woman had been hit squarely in the chest and was struggling to breathe as they and at least one other treated her in the medic tent. When the police advanced, the medic said, they tried to evacuate the young woman using a cot as a makeshift stretcher. The medic said in the post that the police threw at least two flash bang grenades into the first-aid center as the people inside were trying to get away.

“Shortly after we managed to find a place where we felt safe enough to treat her, she stopped responding and we lost her pulse,” the medic’s post reads. “We initiated CPR and after a minute or two she gasped for breath and became responsive for a short time. That cycle repeated itself more than half a dozen times in the following 15-20 minutes.”

“The police are absolutely aware of the location of our first aid center – last night I was upset that they overran our location and put myself and the other medical volunteers at risk,” the post reads. “But tonight we almost lost a patient, a young woman in her early 20s – because the police continue to refuse to acknowledge or respect the literally lifesaving work that we are trying to do.”

The medic later spoke with the Emerald on condition of anonymity, for fear of retaliation. They said that the young woman has been reported to be in serious but stable condition. However, when they awakened this morning, they found dried blood in their ears. They said they couldn’t say conclusively whether or not this was because of the police projectiles allegedly thrown into such a small space, but did not rule it out.

They iterated that the police’s orders to move “cost us at least 10 minutes, if not 20 minutes, in terms of being able to treat [the young woman].”

“I had my van parked 30 feet from the med station. If we had been at the med station, and been able to diagnose her, and not have to carry her two blocks, jostling, to try to find a safe place to stop and have light so we could actually stop and see what we were doing … the first time she lost pulse, I could have easily had her in my van in five minutes, at most,” they said.

Journalist Omari Salisbury also posted to Twitter about the young woman who had been injured and rushed to the hospital.

The police also used tear gas against the Capitol Hill protestors, after some protestors allegedly threw rocks, bottles, and fireworks at the police, and shined lasers into officers’ eyes. Salisbury captured the moment on a Facebook Live stream. Around the 1:29:00 mark, the stream shows a single projectile thrown from the protestors’ side that does not explode. Shortly after, an officer can be heard issuing “a public safety order to disperse as a police explosive that appears to emit some sort of smoke or gas goes off on the front line.

“I command all those assembled at 11[th] and Pine to [garbled] disperse, which means leave this area. If you do not do so, you may be arrested or subject to other police action. Other police action could include the use of chemical agents or less lethal munitions, which may inflict significant pain, or may result in serious injury,” the officer says in the video.

The video shows officers continue to aim police explosive devices at the protestors. These devices emit smoke and flashes.

About 10 minutes later, the police appear to start using tear gas. In the minutes leading up to this, the video shows protestors throwing more projectiles towards the police, but it is unclear if the explosions are from the projectiles or the police’s own explosive devices.

Shortly after the gas starts to float towards him, Salisbury can be heard to say in a hoarse voice, “Gas is out. Gas is out. Is that tear gas? Is that gas?” He also tells a companion to put on their gas mask.

Before these events, the video also shows officers on the frontlines fully outfitted with shields, helmets, and vests, while most protestors wear nothing but normal street clothes.

The move comes just days after SPD Chief Carmen Best and Mayor Jenny Durkan committed to an immediate cessation of tear gas use against protesters, unless Best herself or a deputy chief she assigned expressly signed off on its use by SWAT team members only. Best and Durkan had said they would restrict the use of this gas in response to a joint letter from the Seattle Community Police Commission (CPC), the Office of Police Accountability (OPA), and the Office of the Inspector General (OIG).

The letter asked the city to stop using tear gas against protestors, and suggested it restrict the use of blast balls. According to health experts, tear gas can have severe respiratory consequences that could worsen the effects of the novel coronavirus. The three offices also pointed to a letter the CPC had written five years ago in 2015 to then-Chief Kathleen O’Toole that cited “harmful use of pepper spray, blast balls and other projectiles,” writing that the police department’s policy with regards to their use “either provides insufficient guidance to officers about when these tools should be used, or they appear to be used frequently outside of policy.”

“Use of blast balls in the immediate vicinity of a mass of demonstrators was reported, and we saw on May Day [2015] that these projectiles cause significant and painful injury,” the letter reads.

The Emerald has reached out to the Seattle Police Department, and will update this story as more information becomes available.