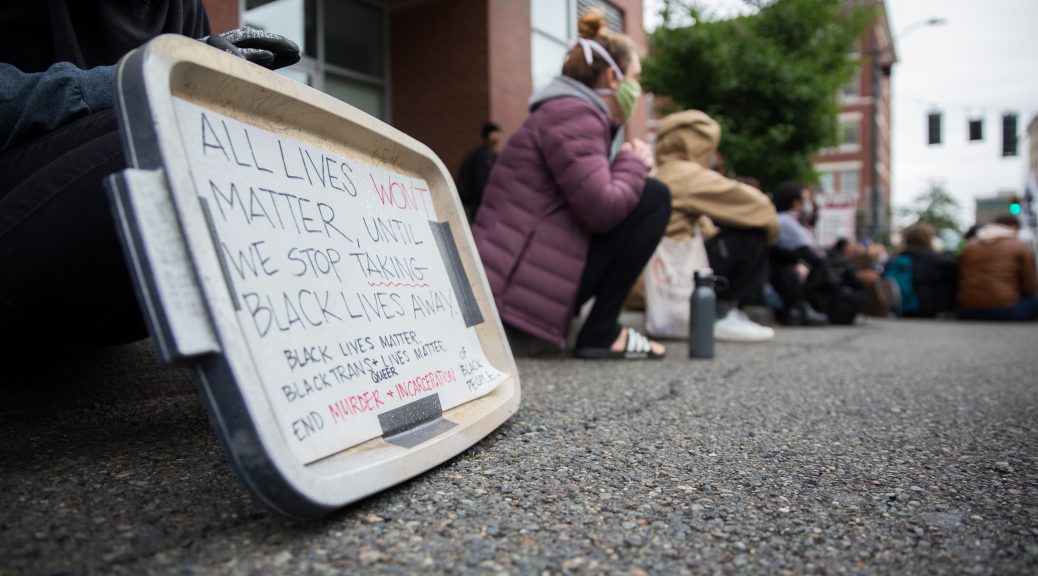 In the wake of countless murders of Black and brown folks at the hands of the police, protests are erupting across the nation and the world. It’s long overdue for myself and fellow White folks to take on our role in systemic change and accountability for police brutality and anti-Black racism. Below is a non-exhaustive list of ways to start, keeping in mind there is no guide to undo racism nor absolve White guilt (shoutout to Melia LaCour for this important essay). There is only a lifelong commitment to follow the leadership of people of color and mobilize in our own community to undo White supremacy. Consider this a step away from complicity and towards collective liberation.

Ways to Give Economically

If you have a “Black Lives Matter” sign in your yard, now is the time to prove it. We were all hit hard financially by COVID-19, but however impacted you were, your Black and brown neighbors were hit harder. I want to urge my fellow White folks to interrogate their choice to donate. Consider all the ways our privilege has financed us — job opportunities, access to high-quality education, raises and promotions, intergenerational wealth, access to bank loans, social capital, the list goes on and on. Consider the 400+ years of economic privilege our ancestors reaped at the expense of Black and brown bodies. Whether it’s $5 or $50 or $500, consider this a tiny refund of the wealth White folks have accumulated due to the oppression of our Black and brown neighbors under White supremacy.

I recall a Black woman organizer saying years ago, “when White people donate to causes that uplift black folks and our humanity, it’s not reparations. Reparations would be an overhaul of this White supremacist system from the top down. Individual donations are just actions to back up your words of solidarity.” So if you’re saving for a post-Rona vacation or a downpayment, it can wait. We need to dig deeper into our pockets to support racial justice work, to support families whose loved ones were murdered by the police, and to support activists on the ground. We are at war with White supremacy — a war Black and brown folks have been fighting for generations. Consider setting up monthly recurring payments to sustainably support the movement.

Support Black Lives Matter Seattle-King County — “Our bail fund is fully funded, but people can support us by donating to our general fund which goes toward operations costs. People can also share our action alerts and our demands to Mayor Durkan which can be found on our website,” shares Fox, a BLM Seattle-King County board member.

Help Bail People Out of Jail Through Northwest Bail Fund

Support the family of Manuel Ellis, who was murdered by Tacoma Police Department

Black Visions Collective — Support a Black-led grassroots organization in Minnesota working to build political home and leadership, create spaces of transformational healing and justice, and build resources for Black people across the state.

Reclaim the Block — Give to a Black-led grassroots organization in Minneapolis working to defund the police and demand investment in resources like affordable housing, harm reduction, youth services, and protection for low-wage workers.

Not This Time! — Give to a local Black-led grassroots organization against police brutality that demands more police accountability and safer communities.

Medical Bill Fund for Dan Gregory — Dan was shot while trying to defend other protesters from getting shot by a gunman that drove into a crowd of protesters on Capitol Hill.

Ways to Give Your Time

Along with donating, here is a list of petitions you can sign that will take five minutes:

Defund Seattle Police, who receive $401 million of city funding despite tear-gassing peaceful protestors during a pandemic and being under federal investigation for racist policing.

Justice for Breonna Taylor, who was murdered by Louisville Police in her own home

Justice for Tony McDade, who was shot in the back by Tallahassee Police Department

Justice for Ahmuad Arbery, who was murdered by White supremacists while jogging

Justice for James Scurlock, who was murdered by a White supremacist while protesting

If you can’t financially give to bail funds, you can give your time through volunteering to go to King County Correctional Facilities to post bail for folks or calling bail fund clients to provide information about their cases.

Here are a list of city officials you can contact to demand defunding the police, stopping the homeless sweeps, and giving folks in jail their constitutional right to speak with a lawyer, especially during a global pandemic:

If you are nervous about calling your representatives, 5 Calls will provide you with tips and a script.

Lastly, now (well, yesterday) is the time to mobilize your spheres of influence. If you are White, talk to your fellow White family, friends, co-workers, and neighbors about this country’s long history of White supremacy, and encourage them to listen to and support Black organizers. Black lives clearly matter more than broken windows, and we need you to disrupt any conversations that imply otherwise. As Seattle’s own Ijeoma Oluo lays out in this important thread, be wary not to waste precious energy arguing over the Internet when you could be actively mobilizing for racial justice in your workplaces, schools, and local governments.

We need to stay in this for the long haul. Educate yourself about privilege and White supremacy. Talk to your friends and family about anti-Blackness, even and especially when it’s uncomfortable. Remind them the most harmful looting has been the pillaging of the land we squat on for profit, including genocide, slavery, and corporate bail-outs. Make a commitment to actively live out anti-racism after the protests fade out. When the media turns away from police brutality in the coming months, seek out resources and join anti-racist organizing groups locally. This fight is far from over; show up, and bring your people alongside you. In the words of a protestor’s sign I saw at the “We Want To Live” rally in the South End, “everyone has a lane to be in for the revolution, but silence is not one of them.”

Kayla Blau is a Seattle-based poet and writer.