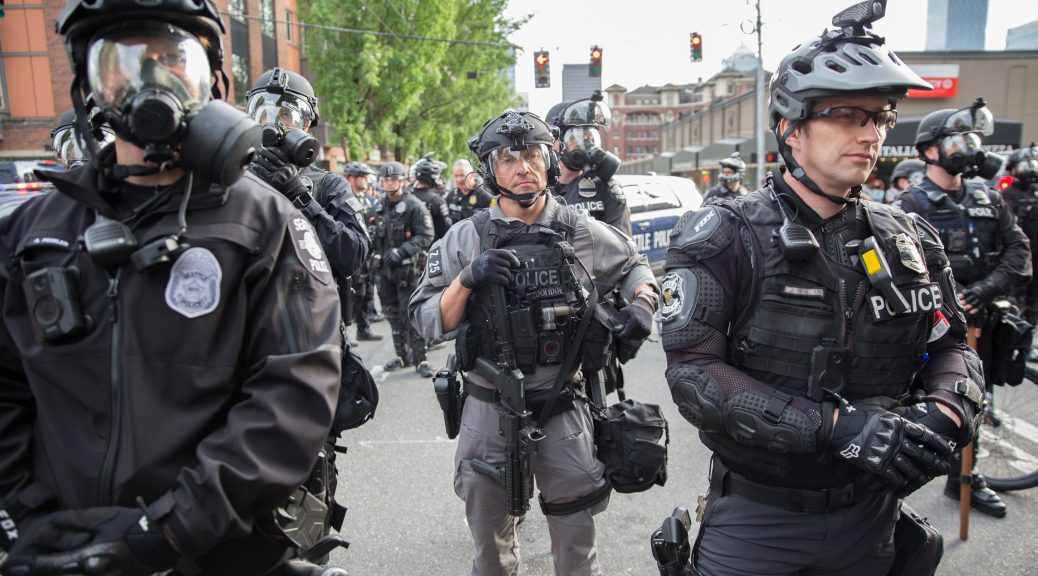 While Durkan framed the new policy as a police accountability measure, the American Civil Liberties Union (ACLU) of Washington has concerns.

“Having officers have their body cameras on at all times has some serious privacy risks,” said Jennifer Lee, Technology & Liberty Project Manager at the ACLU of Washington. “Our stance has been that the evidence is really mixed at best whether body cameras can actually reduce police misconduct and increase accountability.”

Previously, Seattle Police Department (SPD) policy called for officers to not routinely turn on their body cameras. This policy was put in the spotlight at the end of May during demonstrations against racism and policing throughout the city, following the murder of George Floyd by Minneapolis police.

When asked about it during a May 30 press conference after complaints of improper use of force by police during demonstrations — including a widely-circulated video of a young child crying after apparently being exposed to tear gas or pepper spray — Durkan said the policy was born of concerns about police surveillance.

“We do not turn the body cameras on unless we think there’s going to be criminal activity or they have to take actions as a police officer,” Durkan said during the press conference. “We do not want people to believe that police are there to surveil and record lawful protests. And so the body cameras were not on, not to hide what was happening but to respect the right of the protesters.”

In a statement, Durkan said the new policy reflects the wishes of demonstrators and community groups. It is also an “interim” policy, intended to be replaced with a long-term version that addresses concerns about privacy and surveillance.

Having officers regularly turn on body cameras “undoubtedly has complex privacy issues that many have worked to address,” Durkan acknowledged in a statement. She is asking Seattle’s police oversight agencies — the Office of Police Accountability, the Community Police Commission, and Office of the Inspector General — to work with her office and community groups to come up with a new long-term policy that balances holding police accountable “while not chilling the exercise of First Amendment rights or improperly surveilling our communities.”

According to Lee, research about the efficacy of body cameras in improving police accountability are mixed. “On the other hand, it is well-established that the presence of government surveillance cameras, which include body cams, have a chilling effect on free speech,” Lee said.

The fact that body cameras only show what is in front of an officer, and not the officer themself, makes them a limited tool for accountability, Lee said. The cameras are also likely to capture people in the background, Lee said, and police could use the footage for purposes not narrowly defined.

There are also privacy concerns. Police body camera video is public record, so anyone could request footage showing police talking with survivors of domestic violence or sexual assault.

Undocumented immigrants could also be captured in the footage, potentially putting them and their families at risk if the footage is used by law enforcement, shared with other government agencies, shared with companies, or the public. “We often find that technologies, regardless of intent, are often used to exacerbate existing systemic inequities and fuel a lot of racism and police violence,” Lee said.

A 2018 report from the University of Washington examined the history of body cameras in the Seattle Police Department and the complex intersection of privacy and surveillance concerns.

Durkan is inviting Black Lives Matter Seattle-King County, the ACLU of Washington, the King County Department of Public Defense, and other organizations that are interested, to come up with recommendations for the new policy.

Lee said the ACLU of Washington will continue engaging with community partners to help improve police accountability, and that the organization is open to discussions about how police cameras could play a role in promoting police accountability. But ultimately, she said, “we just have a lot of skepticism and concerns about the use of body cameras.”

Chetanya Robinson is a Seattle-based journalist