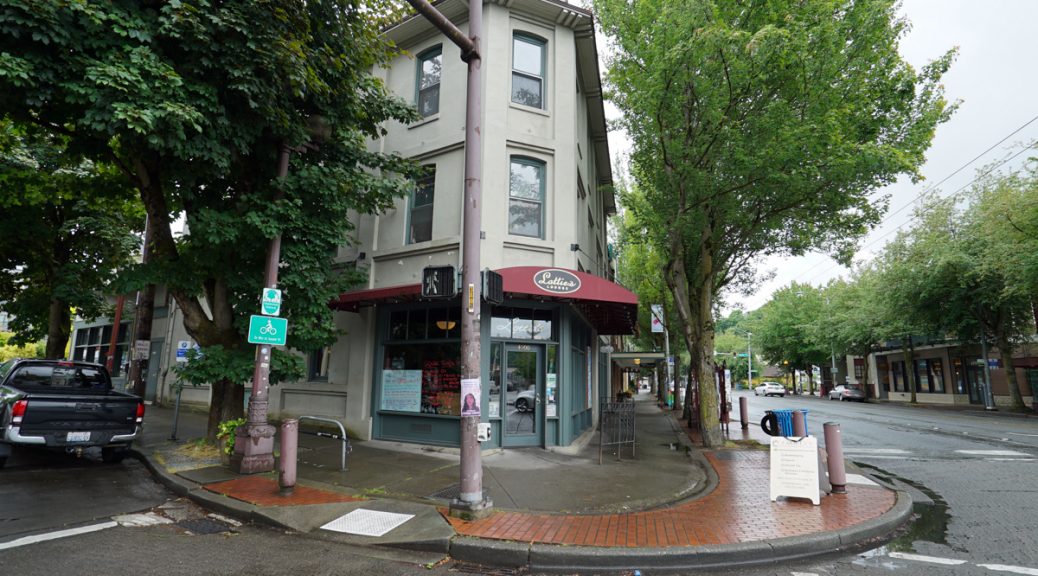 Lottie’s Lounge, known as “Columbia City’s Living Room,” is back in limited service with a new, outdoor lemonade stand. Located on the patio, Lottie’s Lemonade Stand sells hot dogs, vegan Field Roast dogs, hot links, bratwurst, popcorn, slushies, iced tea, and of course, fresh-made lemonade. They also sell takeout beer and wine, and their in-house made drinks come with the option of adding alcohol. As one of their recent Instagram posts stated, they serve both lemonade and “lemonade.”

Beau Hebert, Lottie’s owner since 2010, sees the stand as a cheeky cover for a speakeasy of sorts. “We’re making slushies, the most delicious slushies you ever had, fresh lemonade, fresh iced tea, but you can buy the little airplane bottles [of alcohol], and then people can just pop it in there,” said Hebert. “Once they break that seal, it’s like, ‘Don’t ask, don’t tell.’ Do what you’re going to do, and that’s the way we’re doing it. It’s fully legal, but also kind of fun.”

Lottie’s Lemonade Stand, which kicked off in early May, is open Wednesday, Thursday, and Friday from 3–7 p.m. and weekends from noon to 6 p.m. Food offerings center around hot dogs, including the Seattle Dog, a hot dog topped with cream cheese and grilled onions, and the Disco Dog. “It’s got relish and mustard, mayonnaise, and cotija cheese simulates cocaine on there. We’re just having fun and being playful,” Hebert explained.

Slushies at Lottie’s Lemonade Stand include blends like peach-cucumber and ginger-mango. They’re exceptional as the “kid version” or, with your choice of a miniature tequila, vodka, or whiskey, can easily be transformed into variations of margaritas, lemon drops, or daiquiris respectively.

Hebert affirmed the stand is a survival scenario. He went on to say, “It’s actually been pretty darn successful for what it is and pretty fun. The neighborhood has really enjoyed it. They’ve really dug it. It’s kind of become its own institution of sorts already.”

At the beginning of state-mandated restaurant and bar closures due to COVID-19, Hebert wasn’t in a rush to adapt to keep Lottie’s open in some capacity. He had just sold Jude’s Old Town in Rainier Beach in January, partly because he felt overworked, and welcomed the closure to “lay back and get a sense of how long this might go on [and] get more information.”

Hebert was admittedly a little confused as to what Lottie’s next steps would be. “I started coming back into Lottie’s, just kind of moving stuff around and cleaning stuff, doing a little cooking, and just trying to get my head back in the game, but feeling confused,” Hebert remembered. “I don’t know how to pivot and do what this requires. I don’t trust food delivery apps, I don’t use them. I didn’t want to create a delivery apparatus.”

“Then I was standing in the kitchen and it hit me that I could take all of the existing equipment we had and just put it out on our patio and create essentially a food truck … In talking to other people, places, and my purveyors, the things that are working are really basic, comfort stuff. Let’s do a hot dog stand, and then the lemonade stand will be like the cover for a speakeasy. That’s where all that came from.”

Considering the overwhelmingly positive response he’s gotten from Lottie’s Lemonade Stand, Hebert anticipates maintaining some iteration of it even after COVID-19 restrictions are lifted.

“It’s been fun enough and positive enough and actually lucrative enough to justify keeping it going in some sense or another,” said Hebert.