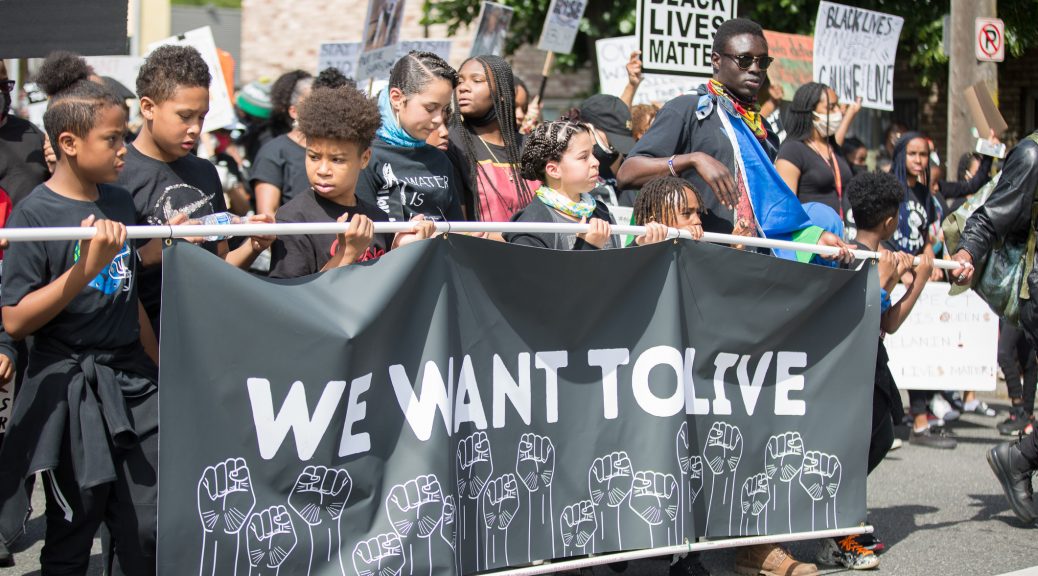 Rainier Beach High School student Angelina Riley walked out of virtual school at noon on Wednesday, June 3, waving a sign outside the street of her home to protest police presence in schools. At least 100 other youth did the same. Riley said that youth wanted a way to get involved in the activism and momentum around challenging police brutality. “Somewhere people have forgotten about is schools,” she said.

So, she and other high school students from the Seattle area organized a protest — albeit virtually. Riley said that the solidarity from students of all backgrounds is inspiring to her as a Black person. Students walked out of their online classes to stand outside, took pictures of their signs and posted the photographs to social media under #studentshavehadenough. Hundreds of posts congregated on Instagram.

The action preceded Seattle Public Schools’ decision Wednesday to cut ties with the Seattle Police Department for at least one year.

And though classroom learning may return in the fall, there is an increasing number of students hoping an accompanying police presence never does again.

The physical presence of police — or “school emphasis officers” — in Seattle Public Schools is limited to four schools: Denny International Middle School, Washington Middle School, Aki Kurose Middle School and South Shore K-8 School. The officers present there are employed by the Seattle Police Department and, according to the SPD website, “focus on gang resistance and violence prevention education and training, truancy and suspension reduction.”

Students want Seattle Public Schools (SPS) to end their partnership with the Seattle Police Department. The students have five preliminary demands they posted on Instagram:

These demands, including the phrase “defund police,” which has been rippling across the U.S., call into question how the city’s monetary resources are distributed. The city of Seattle has allocated $409,538,851 for police expenditures in 2020. In comparison, the annual budget allots $105,261,978 for education and early learning; SPS is not supported by city funds.

By day’s end on June 3, the SPS Office of the Superintendent released a statement saying they would be reevaluating their relationship with officers in schools. “SPS does not currently have any contracts with the Seattle Police Department outside of providing security at athletic events, but does have School Emphasis Officers in four of our schools through a partnership with the city,” the statement read.

Back at home, Riley was exhausted and flooded with feelings after three days of rallying with other student organizers to get the #studentshavehadenough campaign off the ground, all while managing school.

“I’ve been feeling drained. I haven’t really thought about anything else. But I’m also just feeling really empowered,” she said. “A lot of my peers have felt the same way — we’ll talk about how tired we are, but how proud we are of all the work we are doing. How proud we are of how allies have been showing up.”

Riley says students will continue to organize in other ways with petitions, engaging with the school board and letter writing. A few days later, on Sunday, throngs of young people gathered along with community members at Othello Park in South Seattle to protest police. The “We Want to Live March for Black Lives to End Violence” was hosted by Community Passageways, a nonprofit that works to end youth incarceration and create sustainable solutions for communities, and amassed around 8,000 people.

On Tuesday, June 9, the SPS superintendent announced an intent to suspend their partnership with SPD. The school board approved the decision on June 10.

“We must ensure that SPD’s values and actions are in alignment with our strategic plan, Seattle Excellence, as well as our values as an organization,” SPS Superintendent Denise Juneau said in a statement. “SPD will not be present on our campuses except in emergencies.”

The impacts of police on school premises affects students’ comfort in schools and in their communities, as well as aiding in the school-prison pipeline — all issues that will not disappear overnight and are intricately tied to the broader movement to hold law enforcement accountable.

How policing works in schools

The first program to bring police officers into schools was called “Officer Friendly” in Flint, Michigan, 1958. Similar models spread throughout the country following its success. Initially, the police officer’s role in schools was meant to be one of a mentor, counselor and teacher. Over subsequent decades, the role shifted from one of an adult who could provide guidance and support to an acute attention to crime. The increase and prevalence of school shootings also supported rhetoric for police to be present and act with force in educational settings.

Dominique Davis, the executive director of Community Passageways, remembers the security officers in his high school because they were part of the community. “They were there to support you so when you got in a fight, you didn’t get an assault charge — you ended up getting suspended and then you come back to school when things calm down,” Davis said.

In the schools where officers are placed, the majority of students are non-white and low-income, according to a 2017 report from the American Civil Liberties Union of Washington (ACLU-WA) that chronicled police in schools’ effectiveness and accountability and showed alternative solutions.

Whether or not schools have an in-house officer, administrators often call on police to respond to “routine student misconduct.” When officers respond to school calls, they can use excessive force in classrooms and hallways.

“It infuriates me when I see young women and young men being absolutely brutalized by these Rambo cops that are 99.9 percent white cops, roughhousing our little boys, little girls,” Davis said.

There are many accounts of this; Riley recounted seeing her classmate, a young Black boy, thrown to the ground by an officer in middle school. While students, parents and teachers have a collection of incidents they can flip through, Washington state law requires schools to report any incident where an officer has forcefully handled a student, but doesn’t require other officer-student interactions to be reported. ACLU-WA also found a number of schools didn’t report any data about restraints, making it impossible to determine the number of student arrests in the state.

Students are most often arrested for “disturbing school,” a criminal offense in Washington. “Thus, there is no legal line between school discipline and criminal activity,” according to ACLU-WA’s investigation, which further suggested students are being punished by the law for what is really a behavioral issue — or, put another way, for being a teenager. In one instance, a high school student was arrested and charged for fourth-degree assault for pouring chocolate milk on another student during lunch time; another high school student was arrested and charged for throwing one punch at a peer.

When police officers respond to an incident, they create discomfort ranging to fear for students. Riley says Black students feel especially unsafe in policed situations because they and their communities are overpoliced. Inviting officers full-time into schools or in response to a behavioral complaint can fast-track a situation that disproportionately sends students of color away from school and into the juvenile justice system. The students who end up in trouble with law enforcement are typically unarmed.

Society’s rampant racial prejudice creates this surveillance and student dynamic in blatant disregard of the historical trauma and legacies that have led to Black and Brown communities being underfunded, under resourced and robbed of municipal investments. In highly policed communities of color, where police brutality is a feared reality, Black youth are already threatened by police in their neighborhoods and from the images they see in the media and on TV.

Kidist Habte, a student activist from Rainier Beach High School and founder of Black and Brown Minds Matter, a group advocating for equity in education, asks this question: “How do we make students feel comfortable — especially Black and Brown students — when there are cops on television killing people who look like them right outside the gates of their school?”

Habte explained that police presence can be both an officer’s physical presence and the hypothetical threat of calling law enforcement. “I’ve seen many times in school where a student will run into trouble and the teachers will threaten to call the police on them,” she said. “They are both in the same severity because they reaffirm this hierarchy and this social power where white people are using a history of violence against another group.”

Davis said even the most dedicated police officer with a heart for children is operating within the confines of a police system whose policies and bias benefit white people and oppress Black communities. “When you are operating underneath the umbrella of a racist legal institution and you are operating under the strict rules, regulations and guidelines — that same officer who has a heart for the kids, he cannot overlook the fact because he will lose his job.” Davis added that when the police system operates in schools, its racist underpinnings are contagious and become normalized in the education system; one symptom of this is officers are more likely to use force with Black students.

A Seattle Public Schools 2019 procedural report stated that when school principals are approached by law enforcement officers, they cannot intervene with disciplinary action. If an officer wants to interview a child over 12, parents do not have to be present. Principals also cannot “prevent” interviews. If a student is taken into custody by an officer, a warrant is not required; principals can notify the parents/guardians — unless “directed not to by the law enforcement officer.”

Davis said there are ways to engage parents, teachers and broader community stakeholders to protect children during the school day. “We need to start training and putting people from the community who we can employ in all of our schools to do the work.” When youth act up, Davis said there are productive, empathetic solutions for them to work through conflict. Peacemaking and healing circles, for example, invite students to engage constructively without law enforcement.

“When you call 911 for a police officer to show up, it should be if someone has a gun or is blowing up a school,” he said.

Davis and Community Passageways are embedded in practicing restorative justice to ensure community accountability in schools that can benefit students and parents and help bolster a broader safety net of social services.

Community activists, students, parents and advocates say behavioral and disciplinary incidents in schools can be better handled by counselors and vital wrap-around social services instead of law enforcement — solutions that consider youth’s psychological well-being, development and healing and community equity.

A petition being circulated by student groups, including Black and Brown Minds Matter and supporting organizations, states just that: “We’ve had enough with cops instead of counselors in our schools.”

“Situations don’t deescalate after just one day,” said Habte, who is supportive of restorative justice models. “It’s understood that we are very complex human beings; there are so many different components that need to be addressed. Finding peace takes time.”

Kamna Shastri is a staff reporter covering narrative and investigative stories for Real Change. She has a background in community journalism. Contact her at kamna@realchangenews.org. Twitter: @KShastri2

Young people along with community members, lead a march that began at Othello Park in South Seattle to protest police. The “We Want to Live March for Black Lives to End Violence” was hosted by Community Passageways, a nonprofit working to end youth incarceration. (Photo: Alex Garland)