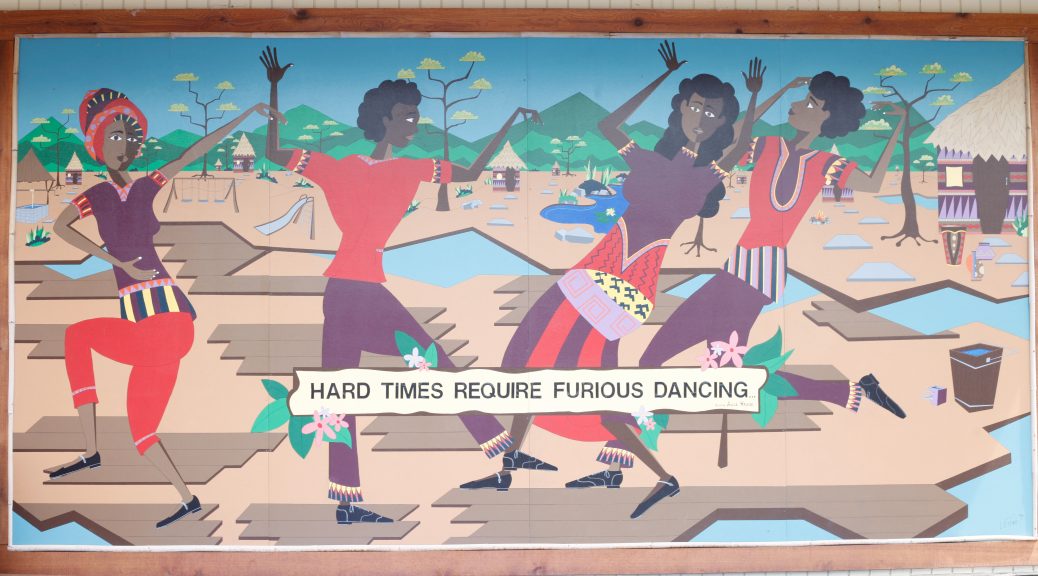 Outside of the Northwest Tap Connection studio a vibrant mural by Lawrence Pitre stands tall with an Alice Walker quote smack in the center: “Furious Times Require Furious Dancing.”

For now, however, dancing inside of Northwest Tap has come to a screeching halt. Like many small businesses, the impact of COVID 19 has temporarily shut the doors of Northwest Tap.

In response, the founder and artistic director, Melba Ayco, and the Northwest Tap Connection team are raising $75,000 to cover rent, utilities, and virtual classes. They also hope that the fundraiser will help keep the minimum class payment to $10 when the studio reopens.

For Ayco, keeping the studio affordable, accessible, and rooted in Black culture is fundamental.

Growing up in a small town near the north shores of New Orleans, Ayco remembers putting bottle caps on the bottom of her shoes and trying to dance like Shirley Temple:

“I really kinda got into tap dancing because I was in that era that every child looked at Shirley Temple and wanted to be Shirley Temple … And then when I got to be in the second grade I had a teacher named Ms. Poydros who was teaching tap dancing … and I fell in love with it.”

Ayco learned from Ms. Poydros at a Rosenwald school, and distinctly remembers that when the public schools integrated in 1969, students at the newly integrated school discouraged her from tap dancing.

“So, that was really hard for me,” Ayco continued, “because as much as I liked tap-dancing, when I was striving to define my blackness from being Negro and Colored to being Black and proud … there were several things that really I look back on now and I feel they were of value to Blackness … But because it was frowned upon and used to marginalize us to such an extent we put it aside.”

It wasn’t until Ayco relocated to Seattle, and her own daughter, Shaina, began to take tap classes from Darrlyn Smith, a Black instructor from the 7th Ward in New Orleans, that Ayco remembered her love for tap and began to reconnect to the art form.

Her daughter went on to enroll in Darryln Smith’s studio Central TTAAPP (Talent, Tap, Acting, Arts, Performance, Production), and Ayco became the Program Manager. It was through Ayco’s rediscovery of tap alongside her daughter that she began to see how the art form is integral to Black history and expression.

In a 2003 article in the Seattle Post-Intelligencer, Ayco described the origins of Rhythm Tap: “Black Tap … originated during the days of Southern slavery after drums were outlawed because of slave uprisings. Blacks began using their feet to communicate with each other. This is about watching yourself evolve from the slave ships,” Ayco said.

In 2002, Darryln Smith suddenly passed away due to a massive heart attack, leaving a void in the community with many students and parents mourning her passing. Ayco decided to step in as a leader to help continue the legacy of Central TTAAPP, ultimately forming Northwest Tap Connection in 2005.

In 2016, Shakiah Danielson, artistic director of the hip hop program at Northwest Tap Connection, choreographed a short film, Hell You TalmBout with Northwest Tap dancers in response to the brutal police killings of Sandra Bland, Philando Castile and Mike Brown. The short film, which won multiple accolades and national attention, continues to raise the reputation of Northwest Tap as a studio centering young Black and Brown artists with a social justice lens.

Ayco stresses that the school is invested in developing the youth not just as dancers, but as whole individuals: “What I’m trying to do is plant seeds of integrity, socially conscious, and knowing to do the right thing.”

In order to keep this holistic vision alive and well, Northwest Tap Connection purchased another building in 2018 to allow for additional rehearsal and performance space, as well as a music and movie screening room, a kitchen, gardening space and a parking lot. “The big thing for us is keeping the space,” Ayco said. “ Rent is going up so high, so trying to keep a Black-controlled space is very critical … If we hadn’t taken that space I can guarantee you it would’ve been an apartment building.”

If you are interested in donating to Northwest Tap Connection’s fundraiser, visit this link.