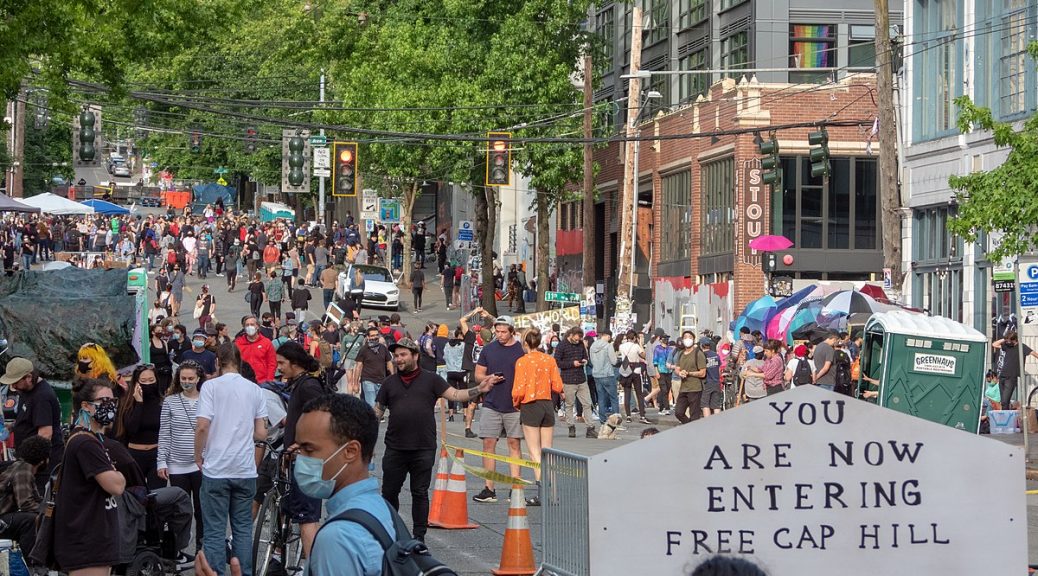 If you walk past a white building on the corner of 12th Avenue and Pine Street on Capitol Hill, you will see it is covered with plywood. On one corner of that plywood is the image of a woman rendered in spray paint. Depicted is Charleena Lyles, a Black woman who was killed by Seattle Police in 2017. The building is the East Precinct of the Seattle Police Department.

On June 8, after over nine days of Seattle protests over the death of George Floyd and police brutality, protestors were finally allowed to march past the East Precinct, which police had vacated earlier that day.

Instead of continuing on past, the protestors stayed, filling approximately six blocks surrounding the precinct with make-shift medical care spaces, a community garden and a “no cop co-op.”

In the past week, the space has been called many things. President Donald Trump called the area the product of an “anarchist takeover,” but the space was widely known as the “Capitol Hill Autonomous Zone” or the CHAZ. Although the area on Capitol Hill has garnered national attention under this name, some protestors who were a part of gaining access to the street in front of the precinct in the first place said the name is problematic and not representative of the spirit of the space.

Roughly 10 to 15 informal leaders of the protest in Capitol Hill, including one protestor named Maurice Cola, met on June 13 to create a new name for the area: Capitol Hill Organized Protest or CHOP.

Leadership of the area surrounding the precinct is a very fluid concept, and there is still some debate over the name on social media: some individuals are still calling it the CHAZ and others refer to the area as an “Occupied Protest.” Citizen journalist Omari Salisbury, who has been covering the Seattle protests extensively, is currently referring to the place as CHAZ/CHOP.

However, Cola said the community never fully agreed on the name “CHAZ” in the first place. He believes someone was trying to push the narrative of an autonomous zone by using spray paint stencils and signs all including the name “CHAZ.”

Cola said naming the space “CHAZ” implies it is no longer a part of the U.S. That’s problematic, Cola argued, as he fears those in government may defend the use of greater force to remove protestors by calling them occupiers or antifa. Cola also said that the name poses potential problems in terms of reparations.

“At the end of the day it can’t be an autonomous zone if we’re still demanding things from the government, because that would mean we’re seceding from their establishment entirely,” Cola said. “None of us have denounced our American citizenship and we demand that they pay the fee.”

Rather than referring to the area around the precinct as an autonomous zone, Cola sees it as a continuation of the protest.

Another protestor, who goes by J.D., said that the intention was never to declare an autonomous zone.

“This is a continual protest, 24 hours, seven days a week,” J.D. said. “It never was the autonomous zone; we’re not trying to secede from the United States.”

J.D. said the space is being filled in order that the protesters’ demands are met and that it will continue to be so until related injustices and oppression are addressed.

The idea of a Capitol Hill Autonomous Zone grabbed the attention of many news outlets and social media users across the nation, and President Donald Trump referred to it as a “Seattle takeover.” However, during an average day, the space itself is both a serious place of protest and reminiscent of an outdoor art fair or farmer’s market.

“It’s chill. It’s like people are just doing what they do, going about their days, networking, making the community a better place,” one visitor to the CHOP told the Emerald. “It’s just what needed to happen, I feel like.”

Another visitor disputed the President’s comments about the space. “To call everybody domestic terrorists and to say that we’re occupying U.S. land…I don’t think it’s his place to make renegade comments like that without being aware of what’s actually happening,” the visitor said.

While the CHOP may not be an autonomous zone, it has many amenities not present at an average protest. In addition to the co-op and community garden, the protest is covered in art. Close to the graffiti and murals on the buildings and plywood coverings surrounding the CHOP, protestors painted the words “Black Lives Matter” on the stretch of Pine Street leading up to the space.

All of the amenities orbit around the precinct. While it used to have an entryway sign reading, “Seattle Police Department East Precinct,” someone spray-painted over the word “police” and protestors have hopes that what they refer to as the “Seattle ‘People’s’ Department East Precinct,” will be turned into a community center for the Black community.

Thus far, Mayor Jenny Durkan and Chief Carmen Best do not seem to be considering such a proposal. Regardless of future plans, the street below the precinct currently functions as a notable place of protest, where leaders and protestors in the Black community are demanding change.

Besides the occasional officer visit in the mostly vacated precinct, the CHOP is largely police-free. Speeches, group discussions and the occasional film viewing take place below the precinct.

Just last week, however, police outside the precinct used tear gas and flash bangs to disperse protestors in response to what SPD considered threats to the safety of law enforcement. As a result, a few protestors have noted that the CHOP is not quite as utopic as it may sound.

“I think the only reason it’s really scary is ‘cause of the police,” one visitor to the area told the Emerald. “I’m personally afraid that the cops are gonna come here and just start tear gassing everyone for no reason.”

Featured image: Western entrance to the Capitol Hill Autonomous Zone on June 10, 2020 (Photo is attributed to Prachatai under a creative commons license)