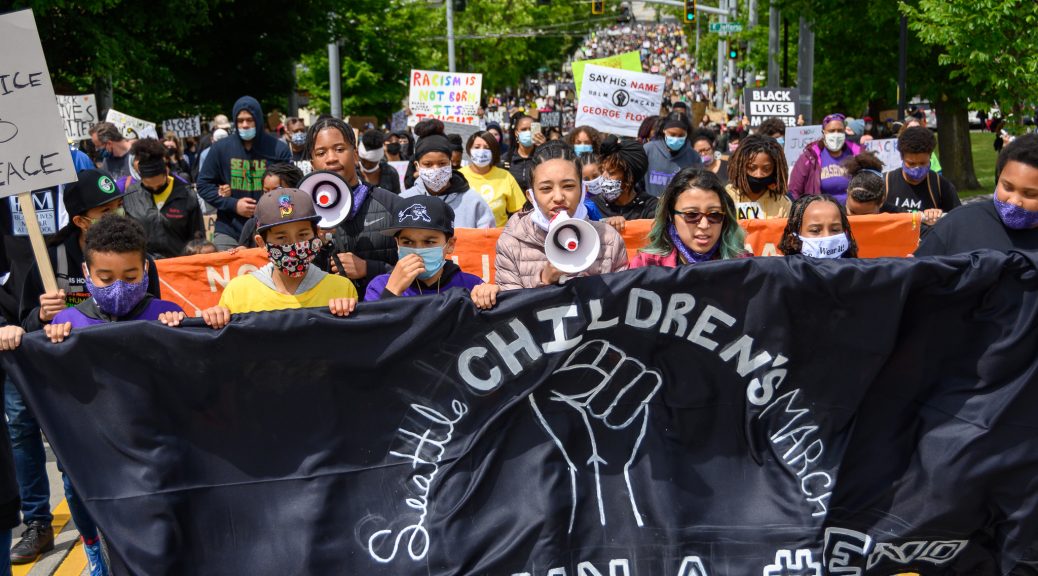 “When I say Black Lives, you say Matter. Black Lives–” “Matter!” “Black Lives–” “Matter!” Three thousand children and adults gathered at Garfield High School’s playfield on Saturday afternoon for the Seattle Children’s March to demand an end to police brutality, anti-Blackness, and systemic racism. The playfield was filled with children ranging in age from toddlers and preschoolers to tweens and teens. The march was organized by a committee of Black youth and child leaders with the support of adult educators, parents, and artists.

The Seattle Children’s March was inspired by The Birmingham Children’s Crusade March, a series of non-violent demonstrations held by thousands of young African Americans in Birmingham, Alabama in 1963. Hundreds of Black youth were assaulted and arrested, but their brave efforts marked a turning point in the Civil Rights Movement as the world watched and white city officials realized they could not ignore protests anymore.

Black youth decided the Seattle Children’s March would be represented by the Sankofa Bird to show gratitude and respect for these generations of Black activists that came before them. The bird is an Akan symbol from West Africa that signifies looking into the past to inform the future. Black youth also chose the colors of their Seattle Children’s March as black, purple, green, and yellow, to represent people, royalty/justice, land, and wealth.

Saturday afternoon’s events started with a rally at Garfield High School, followed by a march down East Yesler Avenue, a loop around the youth jail on 12thAvenue, and a final rally at Bailey Gatzert Elementary. The route was very purposefully chosen. Garfield High School is where Rev. Dr. Martin Luther King Jr. spoke on his only visit to Seattle in 1961. The march down East Yesler took protestors through the Central District, a historically Black neighborhood where gentrification has been pushing African Americans out for two decades. And Bailey Gatzert is just steps away from the new King County youth jail, which Black youth and organizers have been fighting since 2012.

At the Garfield rally, Elijah Lewis shared how he struggled growing up because of the racism of teachers and peers. Teachers told Lewis he was going to end up in prison or working at a McDonald’s. “I thought everything they said was true,” said Lewis. “But [then] I was like, that can’t be me. That’s not going to be me.” With the help of Black community members who believed in him, Elijah just graduated high school and now owns four businesses. “It’s time for equity!” Lewis proclaimed loudly to the sea of faces across Garfield’s playfield. “It’s time for ownership! It’s time to let the future generation know they can demand it. It is ours.”

During another powerful moment at the Garfield rally, Toyia T. Taylor, Seattle Children’s March Committee Chair, asked all the adults in the crowd to kneel down so she could see the youth and children. Taylor is founder and executive director of WeApp, an organization that helps young scholars learn public speaking and how to voice powerful messages. “Children, let me explain something to you,” said Taylor at the Children’s March. “You have already made history just from being born, alone. Your existence is history. Now, it is up to you to change the trajectory of this path. We are only here to guide you, but you are here to lead us…You are beautiful!”

Black youth leaders led the front line of the Seattle Children’s March, taking turns chanting on the bullhorn while holding a black banner that read “Seattle Children’s March: More Than A #Trend.” The youth leaders see their march as a movement and have a list of ten demands which were read at Garfield and again at Bailey Gatzert. Among them, youth are demanding that all police officers be removed from Seattle schools, that the new youth jail be dismantled, and that the City of Seattle implement a paid youth council to lead conversations and anti-racist work in schools, prisons, and government. The youth are also demanding that officers be held accountable for concealing badge numbers and that the militarization of police be ended.

“We walked by the youth jail just now. I’d like to say a message to the youth jail that we need to shut that building down,” said rising 6thgrader Miles Hagopian to loud cheers at the final Bailey Gatzert rally. He then performed “Police Get Off My Block” as part of the rap duo Triple S [South Seattle Swagger]. The rap honors George Floyd, Breonna Taylor, Ahmaud Arbery, Eric Garner, Charleena Lyles, and many others killed by police. Triple S’s performance got a standing ovation. Miles is the son of activist Jesse Hagopian who was pepper-sprayed in the face by police in 2015, filed a lawsuit against the Seattle Police Department, and won a settlement the following year.

The Seattle Children’s March was livestreamed and archived by Rainier Avenue Radio, for those who were not able to attend in person. Social media users were encouraged to use the hashtags #YouthShallLead #BlackChildrenMatter and #BlackChildrenUnite. Organizers held an online fundraiser to support the march and also to sustain the future of the movement for Black lives, police accountability, and community-based assets and solutions. The Seattle Children’s March GoFundMe had a stretch goal of $15,000 that was surpassed by Sunday morning at over $17,000.

“I hope people take away the importance in movements like this because it is our future we’re talking about. We have a voice that needs to be heard. I hope people will listen,” said Seattle Children’s March youth organizer Ziah Daily.

“I’ve never really been part of a project so big,” said Jessi Martinez, another Seattle Children’s March youth organizer. “I’m very, very happy to be a part of this, and I will be continuing doing activism work because I feel like I’ve found my passion.”