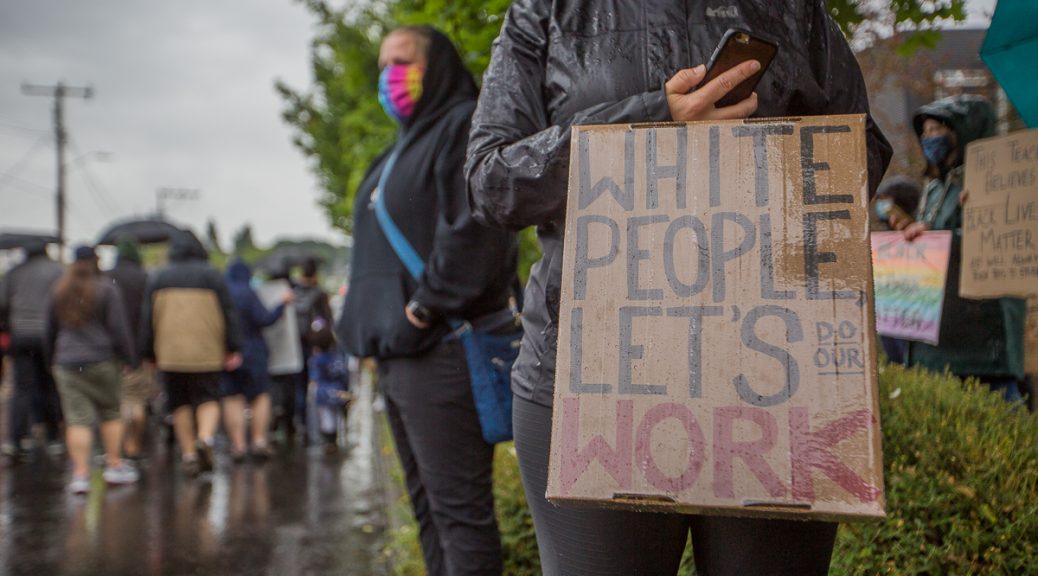 “Miserable is exactly how the white people who want to help should be feeling right now, and then they should sit with that misery until something breaks in their brain, the narrative changes in their psyche, and the legacy of emotional paralysis lifts entirely.”

I’ve had this saying about my work for years now, and it goes like this: I will spend the rest of my career indebted to the (mostly Black) kids and foster families with whom I worked early on, and who had to put up with my sorry self, before I knew the damage I was causing as a white practitioner in Black spaces. I dedicate any good work I do today to these kids. In the spirit of Black Lives Matter, I Say Their Names, to myself, in my heart, on the regular.

The mental health profession, as well as my life, really, is perfectly emblematic of systemic racism, and shows how easy it is for individuals who are problematically “well-meaning” to perpetuate the status quo. My profession is highly exclusive on the basis of class and wealth, benefiting those for whom going to expensive colleges for many years, and working without pay for several more will be a breeze. It is, in short, discriminatory on the basis of resources — and who in our country, which has been built on the backs of slaves and on the stolen land of Indigenous peoples, has time and money to burn? You got it: people who look just like me.

I am a product of unearned handouts, a thing we need to better understand and uncover in a cultural reckoning with what the people who think they are white, as James Baldwin said it, have done. We need Restorative Justice for what has happened in our country and for the oppressive systems at work. My corner to tend is mental health, so an outline of what I have to apologize for might be one place to start.

I took going to college right out of high school for granted, as it was paid for by my grandparents. When they died, I inherited the fruits of their wealth, from real estate and from a job held for my grandfather by the Illinois Bell company while he was away in World War II. He comfortably retired from this job decades later.

The door was held open for my ancestors, and they happily walked through it without a thought given to who was allowed in and who wasn’t. So there was a lot of money in the bank and in the investment portfolio when my grandparents died, in boom times, in the 1990s.

After I spent a number of years squandering it, that inheritance money paid for a condo in Capitol Hill and admission to a private graduate school, where there were no Black or Brown people in my class. I have been consistently trained in middle-class life to ask for more, so I wrote a nice letter to the school, detailing my lack of income — having wasted time and money for all those years — and the nice Jesuits who ran the school gave me funding, making it even cheaper than the ticket price.

I sold the condo when I graduated, and the proceeds paid for my entire degree.

I would spend the next five or so years accruing licensing hours through externship, often with no pay, an opportunity afforded to me only because I had no gargantuan student loan payment to fulfill alongside the high cost of living in this city, and I owned a house where I could rent rooms out for income.

My first job was case management in a foster care program for high-needs kids, which really meant tracking and advising older Black foster moms. They were leaders in their communities who took care of highly traumatized Black and Brown children  and had spent a lifetime doing it. Though I only had one new baby, no parenting expertise, nor any competent supervision on issues of trauma or culture —  much less the most challenging parenting situations — it was my job to instruct these women on how to address extreme behaviors and provide guidance on the broader mental health conditions of the children. If issues of cultural competency did arise, and this was seen as rare, you could request a “cultural consult,” but the person who was trained in my agency, which was located very near the Central District, was white.

I was nothing short of ignorant in this job, the white know-nothing with the fancy education, hired to correct and advise these dignified women of experience and wisdom who were clearly accustomed to such B.S.

Pulling up to Ms. B’s house, I saw evidence of the kids all over her yard — a bike with a deflated tire, Tonka trucks, and balls of every sport strewn about. She’d arrive at the door looking tired, and not a little peeved. “They’re gonna be the death of me, Liz,” she’d say. And we’d laugh, then talk about what happened that week. The boys in her care were out of control, she’d tell me. Talking back and stealing food, picking fights at school and “just generally disrespecting,” she’d say. I’d listen, trained to nod at the right times, narrow my eyes and turn down my mouth in gestures of empathy, both practiced and genuine.

It’s what comes next that is the problem. I’d say something unhelpful, like “Have you tried … ?” and we’d be off to the races, reenacting a pattern of white social worker condescension that is a legacy as old as my profession. Much older, actually.

Turning to my white supervisor for guidance was unproductive, she having long ago retired from direct client contact, so I would give cheap advice for care of these highly traumatized kids from a book I hastily got from Amazon in a panic. The book boasted of solutions to “problem behavior” in kids, skills I didn’t acquire in my expensive graduate school. It offered superficial counsel, where highly trained professional skill and compassion, was called for.

Ms. B genuinely needed guidance, and not half-assed social-worker patronizing. For reliance on old fashioned parenting tricks for highly traumatized kids, things like ignoring or shaming them, or responding with corporal punishment to bad behavior, roundly backfires and is harmful with this population of children. But I wasn’t at all equipped to advise her. My white privilege, however, gave me the gumption to press on anyway, as if I did.

This talk would invariably end in raised eyebrows from Ms. B., followed by a long pause, then a polite smile. Eventually she’d reply, “Sure. Thanks. I’ll try that,” which she never would, since the advice was as empty as the bike tire in the front yard.

These women never made me feel as stupid as I was, and this is because they were effectively my employees. The large check that came from my organization each month required them to put up with me and my cluelessness, a thing they were surely used to from a lifetime of seeing “well-meaning” but actually harmful professionals like me neglect and abandon their kids, then move on to greener pastures the minute that becomes available. Which is pretty much what I did.

Over the years, I would go on to learn about the linkage between trauma and oppression and to clearly see how I was an arm of the oppressor in my work. But it would take some years.

What I intend to do here is to un-justify my profession’s status and my personal success and to name the injustices I perpetrated out loud as a white property owner and mental health professional:

Rebecca Carroll, writing in the Atlantic article, quoted at the start of this essay, talks about how white people need to “sit with the misery until something breaks in their brain.” I am taking notes.

And as a therapist, it also rings a bell.

What she seems to be saying is that white people must engage feeling, something I know from my profession, as a key to changing dysfunctional patterns.

What makes true change in people is whole-self embodiment: ideas coupled with feelings and visceral, or bodily, connection. When we feel things to be true, we cannot so easily shift out of this into another kind of idea. It becomes rooted and real. This theory springs from the notion that humans are at our core empathetic creatures, an idea with evidence in our neurobiology. We have something called “mirror neurons” in our brains: neurons that respond exactly the same way whether we do a certain action or observe it being done by another. It’s basically the wiring itself of brain-to-brain connection between members of an animal species. In our central nervous systems, we essentially have interconnected wiring.

This means that it’s not our big ideas, and our virtue-signaling platforms, that allow us to increase our capacity to grow and change. Nope, it’s our vulnerable, animal, feeling selves. It’s our brave hearts, willing to risk losing status and power. And it’s the connection-wiring of our minds, our embodied empathy, that makes change really happen. That helps us to “break our brains” and be open to the new.

So, how can white clinicians do this? There is much to say on this topic.

But for today, let’s follow the lead of the Restorative Justice movement, and call for white therapists to address their limitations, and their overwhelming over-representation in an important field, and to do better. The frank truth is that the people who most need quality mental health care — actively traumatized kids and families of color — are the ones who are serviced by the least experienced professionals, at the most naive time in their careers. This amounts to injustice, no matter how “well-meaning” these (mostly white) folks are.

In her piece in the Atlantic, Carroll goes on to name the “bone-deep sense of agony and grief” that white people must have in order for Black lives to be made human to white America. To wit, I mistreated and neglected kids and families in the Rainier Valley in the early days of my career, and it will — and should — pain me forever.

I am sorry. I am learning. And I can do better.

My work today is in honor of these kids and of all kids who are victims of the public mental health system, located as it is in a culture of white Supremacy. Make no mistake, this profession is as sick in poor care as law enforcement is in brutality.

I will continue to do my antiracism work. And I see how much work is yet ahead.

Liz Covey is a South Seattle-based Psychotherapist & Parent Coach. Liz is a regular contributor to the Emerald‘s Ask A Therapist column.