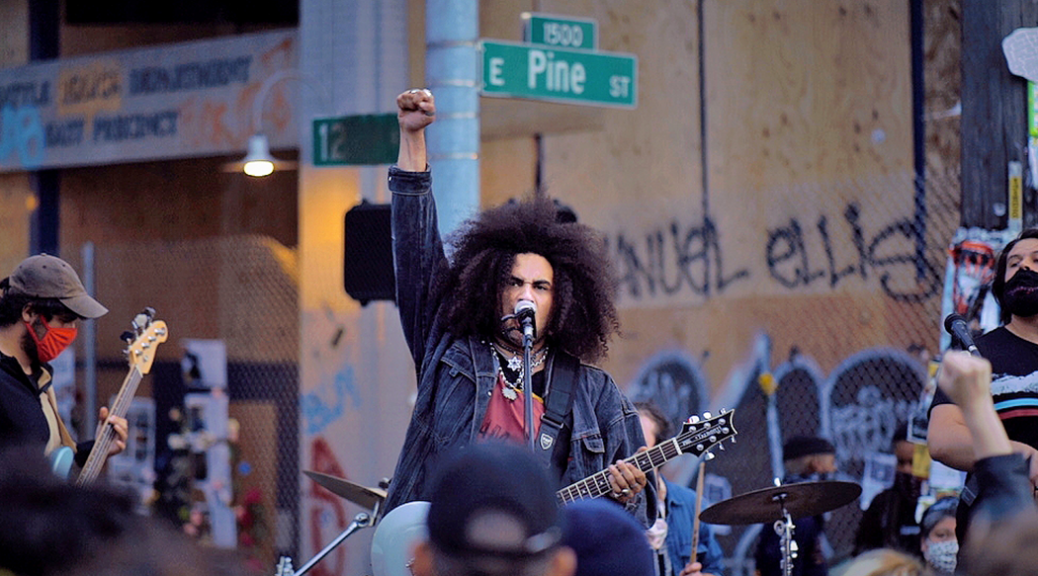 With the soon to be released video for their latest single, Opaque, Seattle band King Youngblood is emerging as a prominent voice for youth currently fighting to amplify the voices of marginalized communities.

“I think it’s ridiculous,” King Youngblood frontman Cameron Lavi-Jones tells me, “That in the process [of] writing, shooting and editing this video, we had to add more names to the list of people to dedicate this to.”

The video originally concluded with a dedication listing the names of Ahmaud Arbery and Breonna Taylor, but the band had to add George Floyd’s name not long after filming was completed.

In the wake of Floyd’s murder by now-former Minneapolis police officer Derek Chauvin, protesters took to the streets nationwide. Here in Seattle, protesters had an infamous standoff with the Seattle Police Department (SPD) at the East Precinct in Capitol Hill that led to protesters being showered with tear gas, pepper spray, flash bangs and rubber bullets. Once SPD moved out of the precinct, protesters established the Capitol Hill Autonomous Zone (CHAZ), which is now known as Capitol Hill Organized Protest (CHOP).

Lavi-Jones was on the front lines, and once CHAZ/CHOP was established, he became an influential voice in ensuring protesters stayed focused on their original goals of defunding the police and providing economic support to Black and Brown communities. There was a point following the departure of SPD that CHAZ/CHOP started to look more like Coachella than ground zero for a protest that was receiving the attention of the national media, he says.

“I think a lot of people that are at CHOP,” Lavi-Jones explains, “are forgetting that, you know, people sacrificed a lot not just to get the space but also are still actively in the work to not just educate but to move people along in this movement. There’s still so much work to be done.”

Lavi-Jones, along with King Youngblood bandmates, facilitated the refocusing of the work at hand by hosting an event, “This Ain’t No Picnic” on June 12 in front of the East Precinct, which has been renamed the Seattle People Department by protesters. The event was specifically aimed at reminding protesters of the initial purpose of the movement and put an end to people using the space to “play soccer and drink White Claws.”

“I think a lot of people are throwing darts and missing the target for what CHOP is about,” he says. “That’s why we put on ‘This Ain’t no Picnic.’ The point of everything going on here — the point of the movement — is to highlight and improve the lives of the marginalized. If we’re allowing people that don’t fully understand that that is the quintessential fact and the quintessential thing that we need to be working towards, then it’s yet another obstacle for creating real change for Black and Brown lives.”

Improving the lives of the marginalized is also the theme in Opaque. The song expresses the feelings of people who feel not invisible, but opaque — they are physically present, but the privileged society looks through them instead of at them, causing people to feel unseen and unappreciated. In the video, there are images of the band becoming translucent and fading out of view as they deliver the haunting chorus, “You see me, right through me, like I’m not there. I’m opaque, but you see me.”

Speaking about the song, Lavi-Jones says, “Opaque itself is talking about making sure that not only are the marginalized seen, but they’re acknowledged and validated and that their struggles, histories and experiences are taken into account when we think about how to push forward into the future. At the core of it, unless we see them for the opaque beings that they are, we’re not going to make any real change.”

Being intentionally unseen is not the only recurring theme in the video. Another that jumps out is a prevailing sense of hope. We see multiple instances of things being broken to pieces — a cello is smashed, a glass picture frame shattered, a picture is torn to shards. But, we also see these things being put back together, as if to say that even after being broken, things can always be rebuilt. I ask Lavi-Jones if this element of hope also exists within his activism.

“Definitely,” he proclaims. “I have a lot of hope for what’s going on right now. I think that hope is really the strongest driving factor to me. In the video, we made sure to highlight that Black and Brown people are going through a lot of things. And they’re allowed to feel how they’re going to feel because this is painful.”

Lavi-Jones has a unique perspective regarding the marginalized experience and his responsibility to give voice to the voiceless. His father, a Black man, is a former Black Panther, and his mother is Jewish. He says he was raised with an understanding of intersectionality and knowledge of the painful histories on both sides of his family.

“My folks did a really good job at making sure that I grew up understanding that I wasn’t half Jewish and half Black, but both simultaneously,” he says. “As an example, when we would do our Passover Seders, we’d start with the ‘I Have a Dream’ speech, and then walk through the parallel stories between Harriet Tubman leading slaves on the Underground Railroad with Moses leading slaves out of Egypt.”

This poignant lens of intersectionality plays out not only in Opaque, but in the forthcoming King Youngblood album God I Am Exhausted. Without dropping spoilers, he tells me the album is aimed at creating the dialogue around what making change actually looks like and interpreting the different ways the process of change will manifest itself in the lives of the people involved.