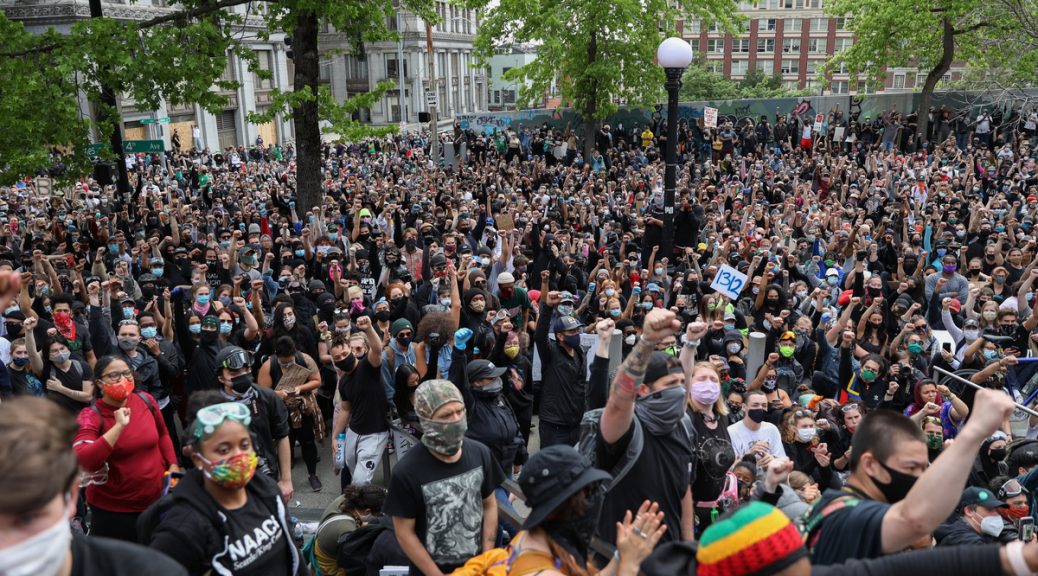 I should be out there.

When I read about protests in the 1960s in my history class, I always imagined that I would’ve been out there if I had been alive then. My values were clear, and I would fight for them alongside my peers. Chained to something, chanting loudly or getting arrested. No hesitation, no question, no fear.

I didn’t think that there would be a moment 60 years later, when we would need to fight for these same rights. Again. Nor did I think it would happen in the middle of a pandemic with two young kids and an immunocompromised husband. As a result, we’ve been in pretty intense quarantine and will continue to be until the end of Phase 4.

I watch the live feeds and read the articles. I try to keep up with the news. I feel like one of those amped-up bulls in their pen just bucking around waiting to tear some shit up. I want to stand up for the values I believe in and defend the people I care so deeply about. I want to be a part of the numbers crucial to toppling this inequitable system. I want to participate in this overwhelming moment of civil unrest, this specific and historical action of collective disruption, that makes America what it is.

I need to sit down and remind myself that everyone has their role. I have to accept that even if this is what I want to do, it’s not the role I was given. While I understand this intellectually, I have to admit that I feel useless in this moment. As a non-Black person of color, I don’t feel like I’m doing my part in the movement. I don’t feel like I’m doing anything, really.

I know that’s not true, though. I also know that if I don’t stop pining for a different role, I’m only holding myself back from doing the work I need to be doing instead. When I stay within my sphere of influence, I have so much more power.

I sat down this week and thought at length, trying to discern and visualize the contours of my actual role in the Black Lives Matter movement. I had to get over the guilt of not physically being on the front lines. Because it’s not about me, anyway. Where do I insert myself in a way that amplifies the momentum of this huge paradigm shift?

I feel like Hamilton during the Revolutionary War. I want to lead a charge and battle in the war. But the role I’m told to do is to write correspondence. Really? Write? While other people are risking something real I have to sit behind a desk like a chump?

When I say “told,” I mean that I know that my calling isn’t as an individual within crowds. My power to move people is with my pen. My power to protect people is with my compassion. My job is to bear witness to my inner experience. Use my mastery of language and distillation to give visibility to those having similar thoughts and feelings as me, the ones that feel too vulnerable to express aloud. This has always been my job. But I don’t want that job right now!

My job here is less glorious. Who cares? Focusing on myself in all of this still makes it about me. I need to get over myself.

It’s like baseball. If you’ve been training for years to be an outfielder catching fly balls, you can’t suddenly say you want to be the catcher because that’s where all the action is happening. No, you need to catch the balls and throw them back in. People are depending on you to play your role. In this metaphor, I’m not even on the field. I’m a commentator up in the sky box who is removed physically but connected by their bird’s-eye view of the bigger picture. It’s time to have the binoculars out and the microphone on. It’s not time to change jobs or minimize my strengths.

Every person has a role right now. It might be as small as sitting at home starting that first hard conversation with your kids. It might be as unglamorous as actively listening to a Black friend in private. It might be as unacknowledged as the Facebook post where you share an educational resource that only gets five likes. But it’s not about the individual here. It’s about the collective. It’s about massive action, and I am adding to it. You are too. What the movement needs is for people like you and me to realize the power we have right now, the one we carry just by occupying space in America. What we need is for us to materialize our agency in any way, in any form.

We all have something to give.

It’s time to find our role, expand our role, or really dig into it. There’s no time to dither around wasting time parsing it out. Don’t try to find a way to do it perfectly. Black Americans in this country have endured 400 years too many for this moment. Now is not the time for patience. It’s a time for action. Small action, big action. Informed action. Whatever you have. Give it and give it now. Give it with the intentional drive that forces America’s feet to the fire of change.

And let’s get to work.

Jasmine Pulido is a Filipinx American writer in Seattle, WA. You can find her blog at “Shameless Jas” where she discusses all the topics people are too ashamed to talk about alongside unapologetically airing anything else on her mind. She enjoys forest bathing, nerdy topics, and racial-social justice.