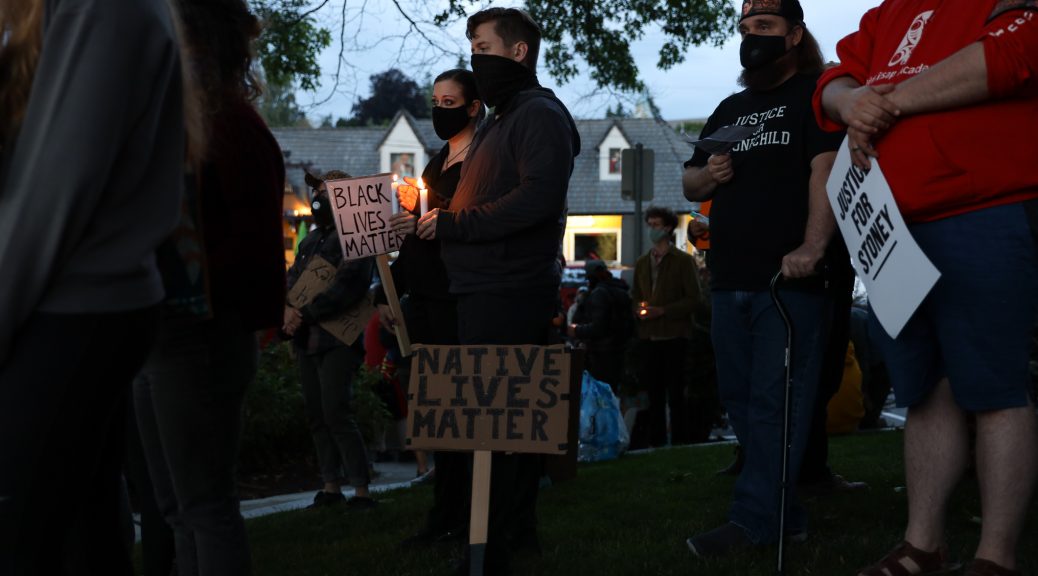 On July 3, over 250 people arrived by foot and vehicle at the Liberty Bay Waterfront Park in Poulsbo, Washington for a vigil honoring the life of Stonechild Chiefstick. As vehicles drove by City Hall, occupants tossed screwdrivers on the steps, some with notes and messages inscribed on them. After arriving at the park, a vigil was held where Chiefstick was killed In 2019 at a “Third of July” fireworks celebration. Poulsbo police officer Craig Keller killed Chiefstick for holding a screwdriver in a reportedly threatening way. Keller, the officer responsible for Cheifstick’s death, is currently on administrative leave while an internal investigation is conducted.

“I’m so sorry that this happened under our watch. The Suquamish Tribe feels like he was one of our own. We love him, we cared about him, we’re here for you. We aren’t going anywhere …The people who were supposed to protect us, were not. They were sent here to protect white people, they weren’t doing it to protect Black people, to protect Brown people.”

While a global pandemic rages across the United States, disproportionally decimating Black and Indigenous communities and People of Color, police violence is still occurring at increasing rates, and police violence continues to affect Indigenous/Native American communities at higher statistical rates than any other community.

As drummers arrived on foot at the vigil, Paul Chiyokten Wagner spoke to the group: “Come together as one. Come together as a family. So we can bring justice to a tragedy. We can bring justice to a world that doesn’t have much in it. The way police abuse our body. The way colonialism dehumanizes us. The way this world looks at people with color on their skin. We’re here to stand in defiance of that abuse. In a prayerful way, in a peaceful way. That is who our people are. We are people of elders. We are people with a sacred promise, to take care of each other. Changing a system of abuse and oppression matters. That we do that as one.”

In attendance were tribal members, community members, and those who have also lost family at the hands of police. Katrina Johnson spoke about how the death of her cousin, Charleena Lyles, at the hands of the Seattle Police Department brought her out to the vigil: “I’m so sad that I have to welcome you into the family that nobody wants to be in. Because the only way to get into this family is your loved one being killed by the police. I too share that pain when police killed my cousin, Charleena Lyles.” Johnson added: “I just want you guys to know that I am here. I’m a phone call away, and we are going to stand with your family for as long as you guys are fighting.”

“Know that you are not alone,” she said, “and know that you have our full support because Black lives matter, Native lives matter and we have to be one to fight the injustice that keeps continuing to happen to our people.”

While the Poulsbo Police internal investigation is looking into any acts of wrongdoing on the part of police officer Craig Keller, Initiative 940’s requirement of an independent investigation is apparently having little effect as Chiefstick’s case is currently not one of 30 planned for review by Attorney General Bob Ferguson. Trishanda Pickup, the mother of four of Chiefstick’s children, recounts the audio of his last words: “’Chill out,’ how is that aggressive?” The family is demanding an independent investigation.

Alex Garland is a Seattle-based photojournalist living in the Beacon Hill neighborhood.