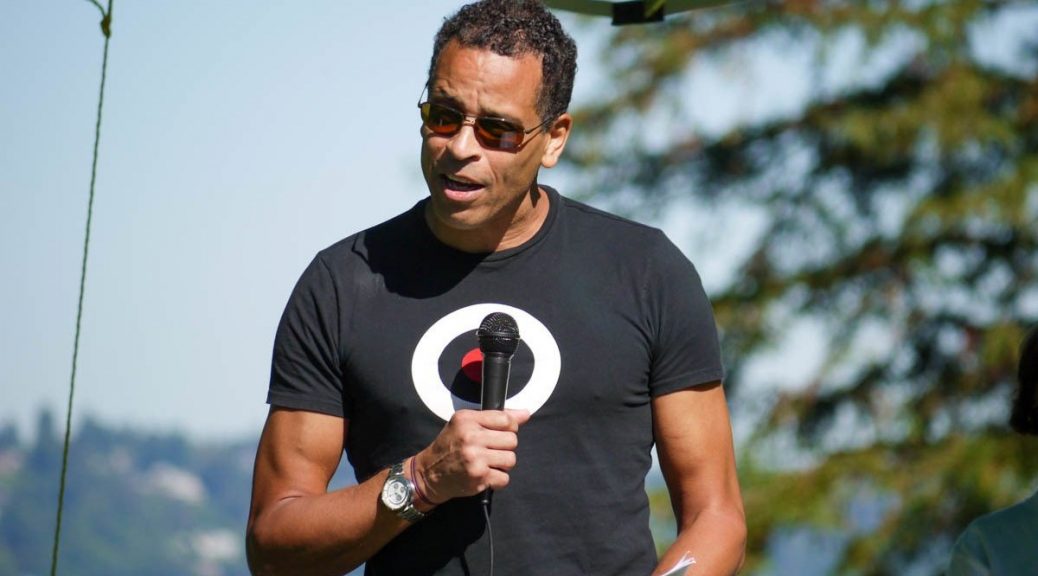 For pediatrician Ben Danielson, a doctor at the Odessa Brown Children’s Clinic in Seattle’s Central District for 21 years, everything has changed.

The adorable toddlers he sees there in a brightly-painted room, can only see the top of his face — just his eyes and eyebrows. They see him gowned and masked. Danielson is accustomed to winning over most of the wariest kids with his smile, but that’s hidden behind personal protective equipment. The pandemic has made him an alien — more of a stranger than he has ever been — when he needs to connect with his patients the most.

First the pandemic, and now weeks of protest against racism, are stressing the families and the children who come to him for sore throats, twisted ankles, and check-ups that include talks on how to be safe with police.

Odessa is a community clinic committed to health and wellness care for lower-income and ethnically diverse children that’s been open for nearly 50 years. The clinic provides medical, dental, mental health, and nutrition services to all families, regardless of their ability to pay. A second clinic, further south and near the Othello Light Rail station, is under construction. It is scheduled to open in 2022. Both are partners with the Seattle Children’s Hospital.

At the clinic, they have re-organized physically and administratively. There are now two separate entrances, so people with respiratory or other illness symptoms don’t use the same door as others without symptoms. There are special Saturday hours for what is known in the trade as “well-child visits.” These are routine visits to update vaccinations, but also a time to review important measures of development so doctors and caregivers can judge if a child is meeting milestones in language development and physical growth.

“We created those Saturday clinics,” Danielson said in an interview with the Emerald, “because we know the families we serve are often essential workers and so for their schedules it would be more convenient.” He and his staff also wanted to prevent delays in care because families might be afraid to come in at all during the pandemic. Skipping measles or other vaccinations could lead to dangerous illness in the future for those children.

“We are trying to head off some of the trauma and stress that was happening in young people’s lives,” he said. “Even simple things. Like, we paste fluoride on any kid with teeth just because I think there’s going to be a bow wave of increasing oral health disease because so many dental clinics were closed for so long,” he said.

Children of different ages show their stress from the pandemic in very different ways.

These days Danielson notices that 4–8-year-olds are hyper-aware of their surroundings, maybe because they aren’t leaving home very often. He’s heard some funny honest comments from this age group: “My dad is not good at math,” for example. For younger school-aged kids, Danielson sees them adapting to the reality of staying home perhaps better than their older siblings. Regular school has not become a baseline normal yet. They don’t mourn it the same ways as their older siblings.

Children slightly older show him a different side of pressure. Quarantine may be more shattering for them. They have years of school and summer in their memory banks. Some children spend as much as 18 hours a day on screens, in one form or another. Some are looking at a phone while Danielson sees them in the clinic, and he’s grown accustomed to that.

For teens, he sees sleep patterns that once might have been a topic of concern for parents but now are just accepted. Many don’t fall asleep until 3 a.m. and stay in bed until noon. A lot of parents are not fighting this, perhaps compensating for the guilt they feel for all the other ways that their teen is suffering.

Many children are asking questions about why Black men and women are being killed and why protest marches are visible every day in many neighborhoods.

These questions are nothing new for Danielson, who faced poverty as a very young child and lived in foster care. He remembers adults in his neighborhood giving him “the talk” about how to be as safe as possible around police.

A few years ago, he began giving this talk himself. First, he gave it to only Black teens, but then he decided all the 11 and 12-year-olds in his practice should hear it.

“Now we do it for basically anyone who is 11 or 12. It is part of the check-up,” he said. Parents sometimes call up and ask for the talk, separate from any medical appointment. In his words, these parents “wanted some authoritative voice to give that. Now, there’s an urgency and angry need for that conversation to happen.”

A few weeks ago, Danielson found himself in a moment that crystallized how strange this time is. A single father and his 15-year-old son were in the clinic for the talk. The father was urgently, desperately trying to have the talk, because of the enormous risk facing young Black men. But his son was mad at him and not ready to listen.

“This struggling father has his own trauma that this time is bringing up for him,” Danielson said. “He was remarkably honest about that, in touch with those feelings.” The father tried to provide lifesaving guidance but hit the brick wall of a teen eager to be his own man.

Privately, without the father present, Danielson was able to connect to his patient. “On some level he was coming into himself as a person. And he didn’t say it that way, but he wanted to have promise and power and ability and potency. He didn’t want a conversation about surviving police interactions to be only about surviving.”

“He wanted it to be about how that narrative gets changed, and how it had to change, and that he would be part of that change.”

There are glimmers of hope in the clinic at Odessa Brown, named for a woman who was a community organizer in the 1960s in Seattle. Brown was raising her four children in Seattle when she fought to bring quality healthcare with dignity to the Central District. The clinic addressed not just medicine, but daily needs such as housing and food. Brown died in 1969 at age 49. When the new children’s clinic opened the year after, a thankful community named the clinic in her honor. Meanwhile the bad news is piling up. Families that visit the clinic are losing jobs, facing food shortages, fearing infection from COVID-19, and watching their children change because of isolation. But there is something about this time that also strikes Danielson with hope.

Seeing the youngest children marching against police brutality is inspiring to him. And it reminds Danielson how important it is to recognize the transformational potential these children hold.

“It is so visually powerful,” he said. “It’s hard to deny there are better days ahead because you see this determination in their eyes. … The future is in really, really good hands.”

Sally James is a health and science writer at www.seattlesciencewriter.com. Her work has appeared in The Seattle Times, Crosscut, PLOS, and elsewhere.