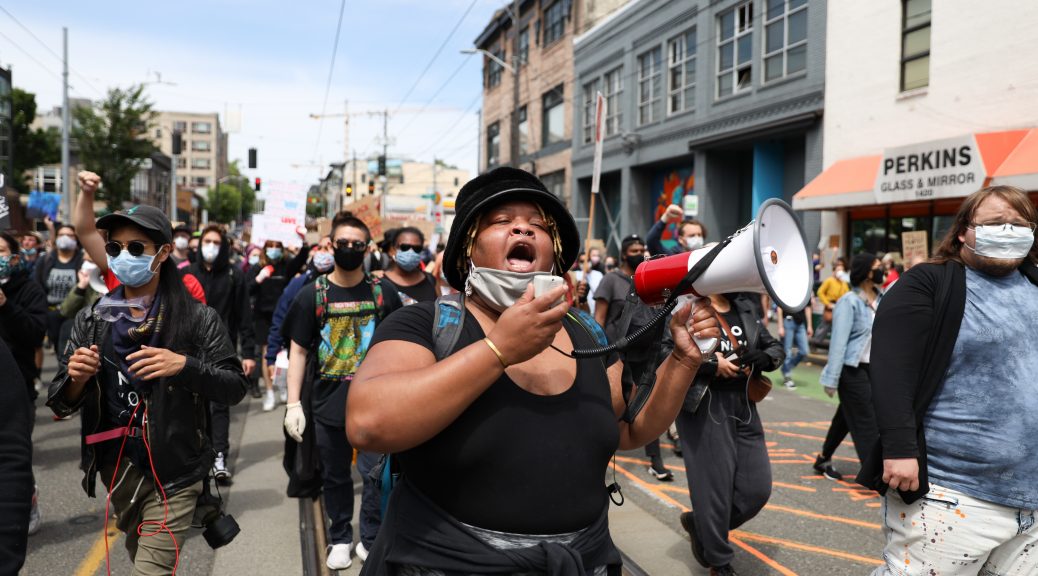 A dozen protesters filed pre-suit claims on July 13 against the City of Seattle, Washington State, and King County over what they are arguing was the use of excessive force against peaceful protesters during the Seattle George Floyd protests and the endangerment of protesters due to the “abandonment of the legal duties of government and law enforcement law.”

The claimants include the family of Summer Taylor, a protester who was fatally struck by a vehicle while protesting on I-5 on July 4, as well as Armand Avery and JoZiah Avery, the father and 7-year-old son who were maced by the Seattle Police Department (SPD) on May 30, in addition to others who were struck by SPD-launched projectiles, rubber bullets, or tear gas and experienced a variety of other injuries.

“These protesters did not incite violence, they did not try to attack the police. They did not do anything but want to exercise their peaceful protester rights,” said Karen Koehler, an attorney whose firm is filing claims on behalf of many of the protesters, during a press conference Monday morning.

The Stritmatter Kessler Koehler Moore law firm is representing eight of the protesters, in addition to Summer Taylor’s family, while the James Bible law firm is representing three protesters including Armand Avery and his son. The submission of pre-suit claims marks the first step before a governmental entity such as the State of Washington, City of Seattle, or King County can be sued.

Before a lawsuit can be filed, a 60-day waiting period must be observed, during which the City, State, or County have the opportunity to reach out regarding the claims. While most protesters have currently filed claims against the City of Seattle, Summer Taylor’s family has also filed claims against Washington State and King County, according to Lisa Benedetti of Stritmatter Kessler Koehler Moore.

The claim Taylor’s family filed against King County details how a member of the King County Sheriff’s Office posted a cartoon online, shortly after Taylor was struck by a vehicle, that depicted people being hit by a car and the words, “All Lives Splatter, Keep Your Ass Off The Road.”

The claim also describes how the Washington State Patrol (WSP) had indicated prior to the deadly incident on July 4 that I-5 would be shut down to facilitate peaceful protests and argues that it was due to the failure of the WSP to sufficiently shut down the roadway that the driver was able to enter the freeway and fatally strike Taylor.

“You don’t get to say ‘Well, they shouldn’t have been on a freeway,’” Koehler said. “There’s a specific zone. They said they were gonna protect it. They didn’t protect it.”

The other claimants are also stating they were subject to either excessive use of force which led to injury or that they were put in danger due to law enforcement and government bodies’ abandonment of legal duties, which put them at risk of interaction with counter-protesters or other lawbreakers, resulting in injury or death, as was the case with Summer Taylor.

While the claims appear to argue that Gregory and Taylor were injured due to abandonment of legal duties on the part of law enforcement and government officials, other claimants experienced injuries as a result of police dispersal methods and projectiles and what the claims appear to be describing as excessive force.

Claimants Gillian Williams and Malichi Howell were both hit by projectiles thrown by the police. While Williams suffered nerve and muscle damage after being hit by a projectile at a protest on June 7, Howell’s thumb was partially amputated and they suffered a damaged forefinger and shattered bones after being hit in the hand by a flash grenade or tear gas canister that police launched on May 30.

Many claimants reported being struck by rubber bullets or other similar projectiles. One claimant is Nikita Tarver, who underwent eye surgery and continues to struggle to regain her eyesight after she was shot in the eye by what may have been a rubber bullet at the Westlake Center protest on May 30. Another claimant named Jordan Pickett believes he was hit with a plastic bullet at a protest on Capitol Hill on June 7.

Other claimants reported being thrown to the ground by police officers or handled very aggressively. One claimant named John William Kelliher brushed past a police officer who was riding a bike on May 31. The officer jumped on Kelliher and put his arm around his neck before arresting him, according to the claim.

One claimant named Jenna Kinyon was knocked unconscious after an officer pulled her behind a police line by grabbing her by the neck or collar after she was playing a drum at a protest, according to the claim.

Other claimants including Daniel Pierce, 39 and Joey Weiser, 29, both described being exposed to tear gas, flash grenades, and pepper spray. Pierce’s claim reports that he stopped attending protests after early June due to a subsequent fear caused by the police.

At the press conference Monday afternoon, Koehler emphasized the serious nature of the claims and the gravity of the claimants’ experiences.