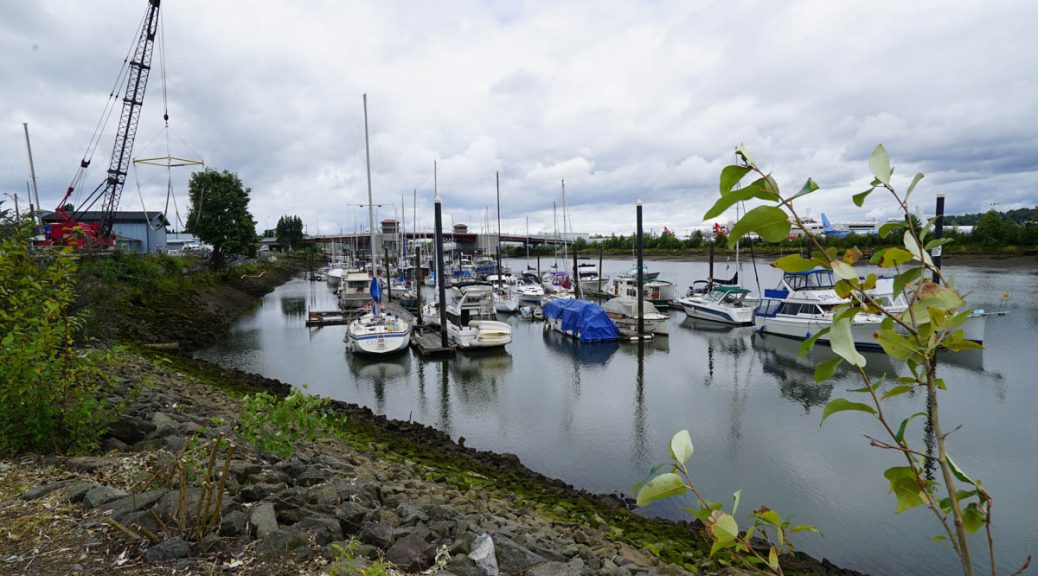 On Tuesday July 7, the Port of Seattle broke ground on Terminal 117 Park located in South Park along the west bank of the Duwamish River.

With the South Park bridge, moored sailboats, and dozens of Boeing commercial jets as a backdrop, Port Commissioner Ryan Calkins opened the event and stressed the importance of the Port’s relationship with its neighbors, saying, “throughout the cleanup, the Port and the community maintained an open dialogue on design ideas, and we know we have a better outcome as a result of that strong partnership.”

Construction for Terminal 117 Park, or T117 Park, will begin this month, with completion slated for the fall of 2021. The price tag will be $25.9 million.

Encompassing 13.5 acres, the main feature of the park will be a restored estuarine habitat, which will include a pier with fishing access, elevated viewpoints, shoreline access for canoe and paddleboard launch, and walking paths.

The site of the park sits on land contaminated by years of asphalt shingle manufacturing.

In 2000, the Port acquired the property from the Malarkey Asphalt Company, and in 2003 the federal Environmental Protection Agency (EPA) deemed Terminal 117 a Superfund site that required a $33 million cleanup by the Port and the City of Seattle.

In 2007, community members successfully advocated for the park’s creation pending approval by the Port Commissioner. Engagement continued among Duwamish Valley communities, with advocacy led by the Duwamish River Cleanup Coalition (DRCC), an organization that has been advocating for cleanup of the Duwamish River since 2001.

“Through a number of collaborations with our federal and local partners, we were able to make this project a success, and now we’re looking forward to the economical, ecological, and community benefits,” said Paulina Lopez, Executive Director of DRCC, during the groundbreaking ceremony. “Especially remarkable has been the community voice that brought and reflected in the cleanup: the design for the site, as well as critical removal action for the soil and river sediments to reduce the PCB levels that were so harmful to our community.”

“We have the Gateway Park that’s not very accessible … it doesn’t really give a lot of maintenance,” said Rich Brown, a resident of Georgetown, stressing the need for more greenspace in the Duwamish Valley. “It has one of those Seattle park signs on it, but they don’t clean it like a Seattle park. But that’s our main access.”

In April, Brown testified in support of Terminal 117 Park at a Port Commissioners’ meeting.

“I think if this could be a spark to other Port-owned properties of becoming hubs for [the] community, that would be amazing,” Brown said.

The Port selected Scarsella Brothers as the project’s general contractor.

In an effort to “raise awareness about upcoming contracting and skilled trades jobs opportunities related to the Terminal 117 project,” the Port held a webinar on how to access and navigate its systems.

The Port is also launching a campaign to rename six of its parks along the Duwamish River this month.

In partnership with the Seattle Parks Foundation, the Port will invite name nominations that “reflect the cultural or ecological significance of each Port-owned site.”

In September, a public vote will open for top finalists, with the new park names announced in October.

Guest speaker Roger Fernandez of the Lower Elwha Tribe closed the groundbreaking ceremony by sharing a story of his tribe’s successful struggle to remove the dams on the Lower Elwha River and the parallel he sees in the struggle for access to the Duwamish River. “It makes me very happy to see that these steps are being taken now,” Fernandez said. “It’s a small part of the river, but in our old stories they remind us over and over and over again the major things that happen are many many small things that occur. The major changes that happen come about by small, small steps.”

Bunthay Cheam was born in the Khao I Dang refugee camp. He is a storyteller, activist, and lifelong resident of South Park.