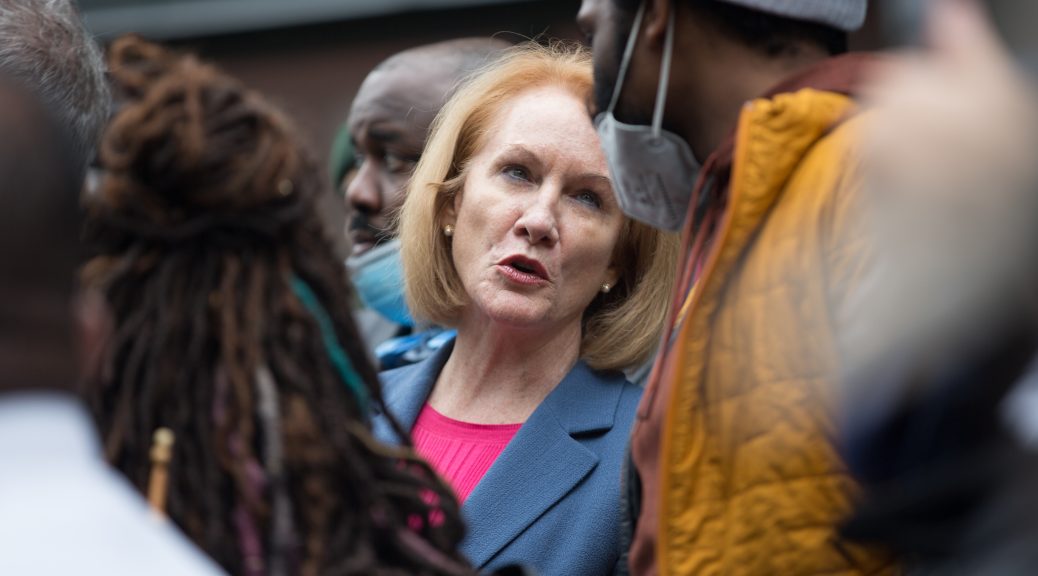 More members of Seattle Mayor Jenny Durkan’s own party are calling for her to resign over the City’s violent handling of recent protests against racism and police brutality.

On Thursday, Democratic leaders from three of five Seattle-area legislative districts issued a joint statement urging Durkan to step down immediately. If she doesn’t, the groups said, the City Council should use its power to remove her.

“Under the Mayor’s authority, and often at her direction or with her approval, the Seattle Police Department (SPD) enacted violence against Seattle residents,” says the statement, from Democratic party groups for the state’s 36th, 37th, and 43rd legislative districts, which together include most of Seattle.

“Mayor Durkan and SPD have used chemical weapons, flash bangs, and other forms of police brutality;” the statement says, “enacted restrictive and explicitly biased curfews; and performed cruel ‘sweeps’ of unsheltered people during a pandemic, which violate both human rights and the Centers for Disease Control’s policy.”

All three Democratic groups in recent weeks have issued separate resolutions calling for Durkan to step down. Under her watch and direction, they say, police attacked peaceful protesters, members of the media, and even children.

“The level of contempt and dishonesty we witnessed from Durkan towards community calls for an end to police violence is obscene,” said Ashok Chandwaney, who sponsored the resolution by the 37th District Democrats, which includes most of South Seattle east of I-5. In an interview Friday, Chandwaney said the group, made up of dues-paying members and elected Precinct Committee Officers, voted nearly 2-to-1 to adopt the resolution, which accuses Durkan of showing “no ability or desire to rein in the SPD or protect peaceful protesters.”

Durkan’s office didn’t respond to a request for comment on Friday, but so far the mayor has been dismissive of those calling for her resignation. Last week, Chief of Staff Stephanie Forma tied the impeachment effort to Councilmember Kshama Sawant, the only registered socialist on the City Council.   “Mayor Durkan won’t be distracted by Councilmember Sawant’s impeachment efforts,” Forma said.

Sawant, who Durkan’s office has called on the council to investigate, is in fact one of three members who’ve raised the resignation issue. Councilmembers Teresa Mosqueda and Tammy Morales, both Democrats, have also asked Durkan to resign or consider leaving office.

Chandwaney of the 37th District Democrats bristled at the suggestion that Sawant was behind the group’s resolution. “We’re Democrats,” they said, “not Socialist Alternative.”

The growing number of registered Democrats calling for Durkan to resign “reflects a lack of legitimacy in her leadership,” Chandwaney said of Durkan. “She’s claiming that she’s a Democrat, but Democrats across the city are saying that she’s clearly unfit to be mayor.”

Beyond overseeing police violence against peaceful protestors, the resolutions also accuse Durkan of defending officers who covered their badge numbers, allowing police to use tear gas despite a prohibition on its use against protestors, and performing sweeps of homeless encampments without providing displaced residents another place to live. The sweeps, the groups point out, go against the U.S. Centers for Disease Control’s own COVID-19 guidance.

Many of the same charges are included in a separate recall petition filed by voters. Durkan has attempted to dismiss that recall, arguing in a court filing this week that she has no duty to dictate police policy, such as the use of tear gas, and thus can’t be held responsible.

While Durkan has at times struck a conciliatory tone with protestors, she has largely avoided criticizing the city’s police force. In early June, speaking to reporters, she said there was “no attempt by anyone to cover badge numbers” during protests.

“Everyone in this city should have a lot of pride in SPD’s work,” she added.

As Chandwaney pointed out, the comments came “immediately after they teargassed people on Capitol Hill.”

If Durkan doesn’t resign, the three Democratic groups are calling on the City Council to remove her through a provision in the city charter allowing councilmembers to remove a mayor “for any willful violation of duty, or for the commission of an offense involving moral turpitude.” Two-thirds of members must vote in favor.

Chandwaney said it’s too late for Durkan to make amends and earn back Seattleites’ trust. Time and time again, they said, the mayor has dragged her feet on reforms, ignored criticism, or mischaracterized police or protestors.

“It’s almost cartoon-bad-guy-level refusal to engage with the conversation … is what really moved me over the line here,” Chandwaney said. “I’ve probably sent hundreds of messages to councilmembers and mayors over the years. This is the first time that I can recall that I’ve asked any public official to resign.”

Ben Adlin is a Seattle-based journalist