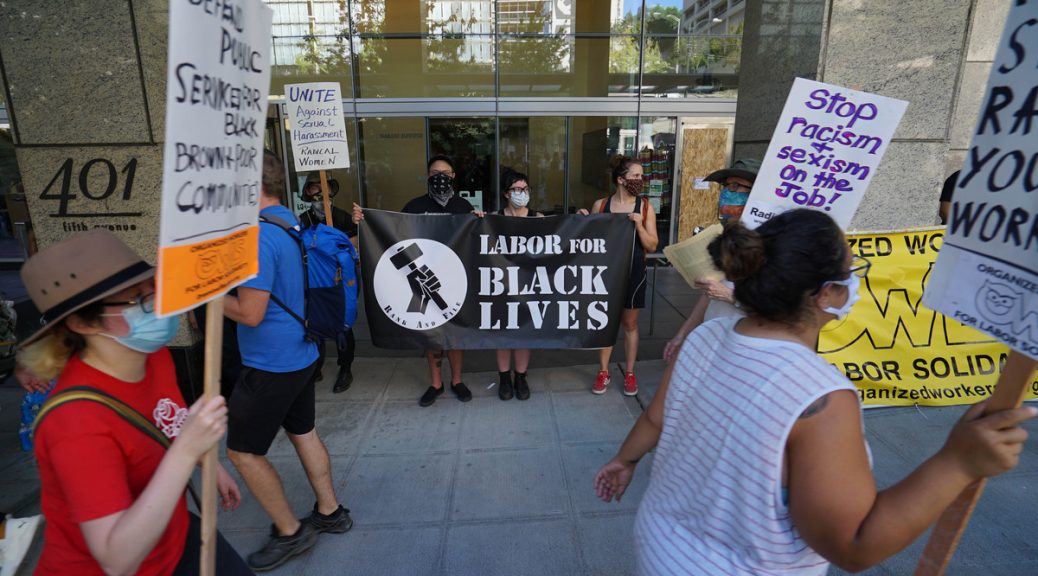 “In the struggle for Black lives, we must also stand for Black workers.”

“In the struggle for Black lives, we must also stand for Black workers,” said Anna Hackman, a professor at Seattle Central College and member of the American Federation of Teachers. “This racist, capitalist system that takes our lives at the hands of police is the same one that exploits our land and our resources and our labor.”

The rally took place as part of the Strike for Black Lives Day of Action, which was observed across the nation on July 20, and was meant “to call for an end to budget cuts, layoffs and austerity measures that disproportionately impact Black and other workers of color,” according to OWLS.

In addition to raising awareness around racism in King County workplaces in general, the rally also drew attention to an incident that occurred last month at the King County Metro’s South Base Complex in Tukwila. Workers at Metro discovered a figurine of a Black man someone had left below a flagpole. The flag’s cords were positioned in a way that some employees believed resembled a noose.

Central to the picket line and rally was a list of six demands aimed at King County Metro and King County Executive Dow Constantine. Prior to the rally on Monday, protesters also previously listed demands at an OWLS protest held on June 25, in response to the incident in Tukwila.

OWLS organizers are demanding that immediate action is taken to stop racist threats, harassment, budget cuts, and lay-offs at King County worksites, that there is restitution for all individuals who have filed complaints regarding racism which were not satisfactorily resolved, that there is affirmative action in hiring, training and promotions, and that frontline workers are provided with sufficient personal protective equipment, according to the group.

“We are here to send Dow Constantine a message,” said Linda Averill, who has driven buses for King County for 24 years, speaking at the rally. “I have seen firsthand way, way, way too much racism where people are denied training, they are denied promotions, where management brings in their own from the outside, where the rank and file and the hard frontline workers are routinely passed up and treated as though we’re disposable.”

In a KUOW article, King County Metro Spokesperson Jeff Switzer said that metro conducted an investigation into the statue incident in Tukwila and that they are “committed to reconciling outstanding issues, restoring the relationships with those who have been currently or historically harmed, and rebuilding a safe and belonging culture.”

While King County Metro wrote that they were making an effort to reach out about other incidents of harassment and are working to improve reporting and resolution efforts, OWLS maintains that following the protests on June 25, their demands were not responded to in a concrete manner and that Metro’s efforts did not feel conducive to change.

“King County Metro has not responded to the demands presented at that rally [on June 25] nor taken any concrete actions.” OWLS said in a press release. “Empty promises to ‘do better’ and talk of ‘renewed commitment’ ensure that the toxic climate currently endured by workers of color will remain unchanged.”

Various unions endorsed the rally and, prior to the speeches, protesters picketed in front of the Chinook building located in Downtown Seattle on Fifth Ave and Jefferson St., waving signs and chanting, “Hey now, whatd’ya know, racism has got to go!” and “What’s disgusting? Union busting.”

Several Whole Foods workers were also present at the rally and shared how leadership at a Seattle Whole Foods location had prohibited them from wearing Black Lives Matter attire while at work, after such items were deemed political by managers.

The same day as the rally, a federal lawsuit was filed against Whole Foods after workers in Massachusetts, New Hampshire, California, and Seattle reported that leadership at various store locations had prohibited them from wearing Black Lives Matter attire, according to an ABC News article.

While the grocery chain cited the Whole Foods’ employee dress code as the reason for not allowing the workers to wear BLM attire, the lead attorney for the plaintiffs is arguing the dress code was used to specifically target BLM wear. Plaintiffs say the company previously permitted rainbow flags and sports team logos despite dress code stipulations that no logos or messages should be worn.

After the speeches concluded at the rally on Monday, protesters took photos in front of a large banner reading, “Root out racism at King County & Beyond!” as organizers called for protesters to share the photo widely before crowds dispersed.