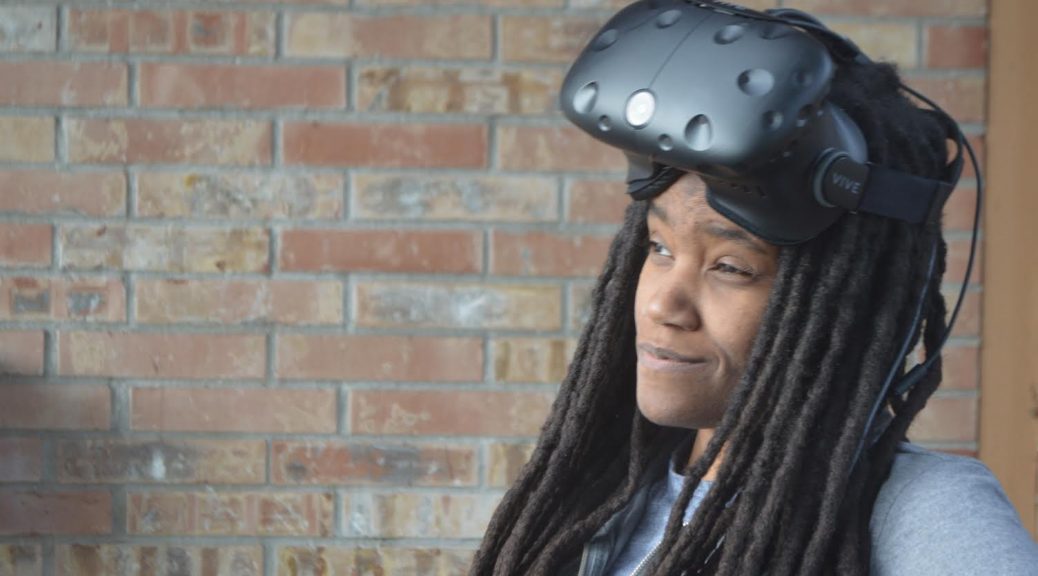 Imagine yourself in a cathedral-sized classroom. You are surrounded by thousands of classmates from all over the world — Europe, Africa, Asia, South America, and beyond. There is a multitude of languages — a cornucopia of cultures. Now imagine an instructor standing at the helm of the class, her pen racing across a whiteboard. She speaks French or Spanish or Mandarin. Imagine that what language she speaks doesn’t matter because everything she writes and everything she says is instantaneously translated into the language you speak and the language that your classmates speak. And THAT is the future of technology according to Evie Powell, PH.D.

The Lead Virtual Reality (VR) Engineer at Proprio and the President/Creative Director of Verge of Brilliance, LLC, a Seattle-based game design company, Evie spends her days creating immersive tools for surgeons to use during spinal fusion operations, and nights and weekends are when she delves into the world of video games. When I sat down with her to discuss her thoughts on how immersive technology such as virtual and augmented reality might impact our society, she was wading through the swamp of technical problem-solving needed for one of her current projects — a mixed reality role-playing game (RPG) with a battle system at its core.

“The global pandemic has made it so that it’s really hard to sort of go out, go to the gym, get exercise, and be motivated to sort of stay active,” Evie said as she described her game, which merges augmented reality with a physical “boss dummy” as part of the game experience. Evie chuckled as she described her prototype “boss” — a large boxing dummy that would normally be used for UFC fight training. The “boss dummy” is tracked by the computer system as the player pursues and attacks the virtual “boss” inside the game. The game system knows when the player has hit the “boss dummy” and where the blow has landed. “I’ve just started building this really intricate battle system where it allows you to sort of do a close-range boxing type of exercise, and you get points based off of relative force. So it’s all based off of your own sort of inner ability, as well as the ability of your character.”

But battle-style RPGs that keep the pounds off during quarantine aren’t the only thing Evie sees immersive technology delivering. She envisions immersive technology as a bridge that brings people together and makes space for empathy and connection. Returning to that multilingual classroom, Evie talks about how immersive technology can not only transform the way we learn but it can remove barriers that prevent us from understanding each other deeply.

“If you could imagine wearing AR [augmented reality] glasses and all they do is listen to the people around you, and if they are speaking a language that is foreign or not native to you, and they are speaking directly at you, then basically in real-time it translates what they’re saying and then maybe displays what they’re saying over their head,” Evie said, explaining how a multilingual classroom might leverage augmented reality. “And so if you could imagine a system in which everybody was using an experience that is not a distraction. It’s not something that will bring your attention away from people. It actually makes your connection more meaningful because now a person that you normally would have to sit there and try to figure out and translate what they’re saying, it would in real-time give you that translation. So you can keep your connection and keep that focus on that person.”

And keeping the focus off of technology is one of Evie’s main goals as a designer. She sees some current technology designs as being too distracting and suggests that designers spend more energy on creating tools that are people-focused. One way that she aims to achieve this goal is through her work developing socially pervasive games — games that allow people to participate in a game experience without actually knowing it.

“A socially pervasive game is where you’re breaking that boundary of people having to be aware or signing onto the same contract as you in order to have this experience or exist in this experience with you,” Evie said as she explained the socially pervasive game Snag’em which she developed for her doctorate. “So I was working on a framework for breaking those boundaries socially so that you can play potentially with people that are either not aware of the game or are not actively playing the game and still get an experience that is meaningful within these sort of non-playing but important characters.”

Snag’em has mostly been played in conference settings where the people who are actively playing can input into the system information about themselves. It could be anything—the school they attended, their hobbies, their hometown, their favorite food. The computer system takes that information and formulates missions for the active players that it thinks will interest them and that will get them interacting with other attendees at the conference, even those people who are not actively playing. If a non-playing attendee is connected to the player in the course of completing a mission, that person can begin playing the game too and the system can see what kind of connections were made and based on what common interests. It’s something that can take the stress out of networking and it could even be used as a way to contact-trace during this pandemic.

“A tool like this could help people identify who they talk to and who they’re connected to and where that sort of chain of origin occurs,” Evie said. “So yeah, I think that over time we’ll have to be very mindful and careful about how we use games like this and how we collect data in games like this. But the advantage is very clear in this case … if you were to come down with coronavirus, heaven forbid, you’ll be able to see in the last couple of days ‘who are the people I’ve actually interacted with and who did they interact with?’ You might be able to just at least send them — or have the system send — an anonymous indication that says, ‘somebody in your network has tested positive for COVID, please get yourself tested.”