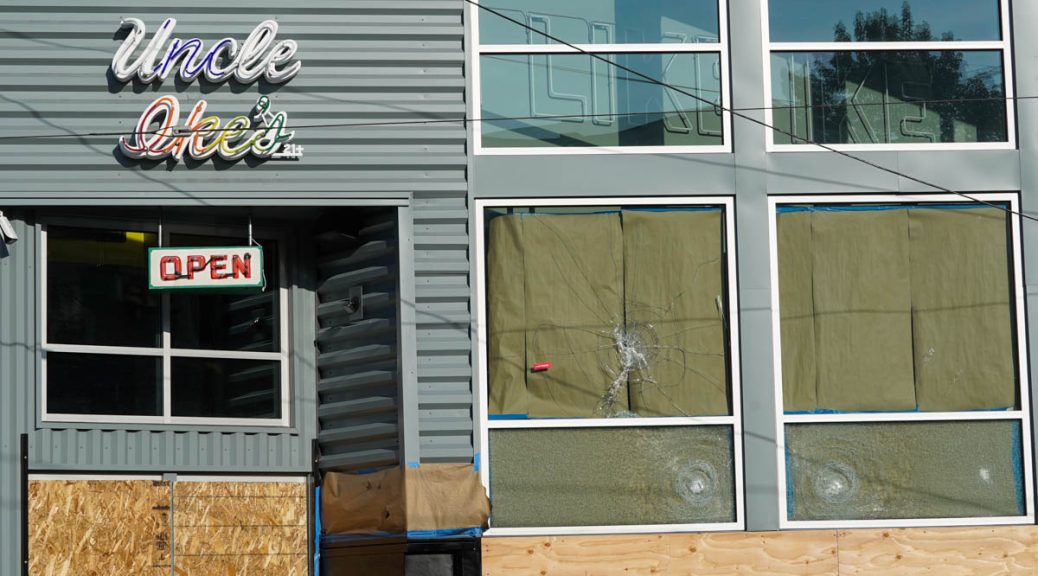 Late on Wednesday night, a group of roughly 100 protesters marched through Capitol Hill, setting off fireworks and smashing the windows of Uncle Ike’s dispensary, Rove Vintage shop, and other store fronts, as well as starting a makeshift fire near the intersection of Pike and 11th Ave.

Around 11 p.m. on July 22, protesters chanted “Out of your homes! Into the streets!” while marching past Uncle Ike’s dispensary near East Olive Way. Protesters turned over dumpsters nearby and later smashed the windows of the dispensary, writing the word “Gentrifier” on the side of the building with spray paint.

Meanwhile bicycle police and various police vehicles staged in the area of Capitol Hill near the East Precinct, as protesters made their way up Pine Street toward Cal Anderson Park. Before reaching the East Precinct, the march headed off of Pine and south onto 11th Ave.

There, protesters tore down the plywood covering the windows of the Rove Vintage shop, a store started by Rachel McNew, the wife of Steven McNew, who is one of the officers who shot Charleena Lyles in 2017.

Grabbing shirts from the vintage shop for fuel, protesters started a makeshift fire on the street, close to the intersection of Pike and 11th, while chanting, “Say her name! Charleena Lyles!”

After protesters dispersed following the appearance of law enforcement, the march continued south. Protesters later smashed the windows of the Likelihood store, and it appeared that some protesters also took some items from the store.

As the march continued, protesters targeted and broke the windows of various storefronts tied to big corporations such as the Whole Foods located across from Seattle U, and the Key Bank located near the intersection of Madison and Summit Ave.

While protesters wrote graffiti that read, “Overthrow” and “Seize the means,” on the side of Swedish Medical Center, no harm was done to the medical facility as protesters marched back toward Seattle U, before dispersing.