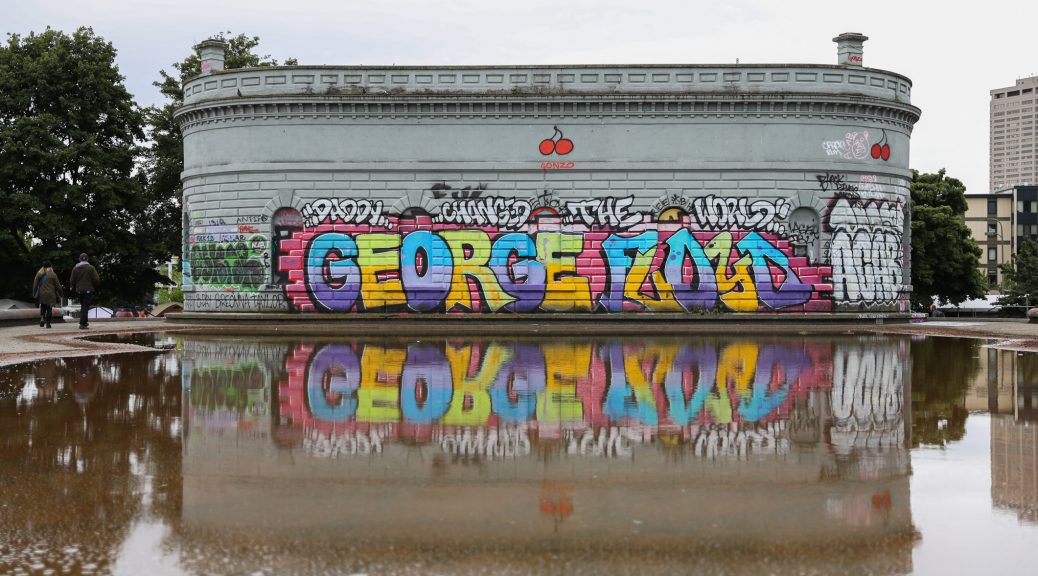 Accompanied by at least one light-up tambourine, a few makeshift drums, and as many as two trumpets, a group of roughly 100 protesters marched through the Ravenna neighborhood Thursday night, July 23, chanting, “Every day!” and “Whose lives matter!? Black Lives Matter!”

Consisting of an 8 a.m. march, an afternoon picket, and an evening march, protesters have been taking part in the Everyday March for over a month in a continued effort to get the City to act on their demands. In recent days, the marchers have specifically pushed for defunding the Seattle Police Department (SPD) budget by 50 percent and for those funds to be reallocated to the Black community.

Anticipating a City Council vote on the proposed SPD cuts in August, the Everyday March has been handing out leaflets, postering, and trying to get their message across to councilmembers. The Thursday march location was aimed at getting the attention of District 4 Councilmember Alex Pedersen, who has supported budget cuts but has not yet committed to defunding the SPD budget by as much as 50 percent.

As the march traveled through Councilmember Pedersen’s neighborhood on Thursday night,  some protesters danced while others led the crowd in a BLM chant, shouting, “Give me a B! Give me an L! Give me an M! BLM!” as well as chants of “Who do we protect!? Black Women!” and “SPD! Take accountability!”

“Give me a ‘B! Give me an ‘L’!” Protesters sing a BLM song, followed by list of demands, before chanting “Family Love! Unity! Equality!” #seattleprotest #seattleprotests pic.twitter.com/pS8NbTxBHp

In a message to Pedersen, protesters chanted, “If we don’t get no justice, you don’t get no sleep!” Some protesters played drums and shook tambourines, and T.K. spoke about Charleena Lyles, who was pregnant when she was shot and killed by Seattle police officers in 2017.

Thursday’s march is not the first time protesters marched near Pedersen’s home. In a Seattle Times article, Pedersen was quoted as saying that he respects these protests, with the exception of any vandalism or messages of profanity on his home, after protesters had previously placed post-it notes with various messages on his doors and windows.

On July 22nd, Council President M. Lorena González released a statement supporting the right to peaceful protest, but disputing the tactic of “‘doxxing’ the personal phone numbers and home addresses of elected officials and community leaders,” over safety concerns.

Thursday’s protest remained in the street and did not approach Pedersen’s house, and at roughly 11 p.m. the peaceful march ended.

Earlier in the day, two Department of Homeland Security (DHS) planes landed in Seattle at 5 p.m. and DHS agents are currently “on standby to protect federal buildings,” according to a tweet from Mayor Jenny Durkan. Durkan indicated that the arrival of DHS agents is not welcome.

“I made clear to Acting Secretary Wolf that deployments in Seattle — like we have seen in Portland — would undermine public safety and break community trust,” Durkan wrote. “Should federal forces intervene like they have in Portland, we are prepared to pursue every legal recourse.”

In a Friday morning press conference, Durkan said she’s asked DHS for clarification on the current whereabouts of their agents, and how DHS plans to deploy them.

For protesters such as those at the Everyday March, T.K. said that the current focus of the marches is not on federal property but on defunding the Seattle Police Department — and she sees no need for federal agents to attack peaceful protesters.

“We don’t care about federal property. We care about our police department. We start there — we start locally,” T.K. said. “What are [the DHS agents] gonna do but mess with a bunch of peaceful people?”

Protests are set for this weekend, including a protest organized by the Youth Liberation Front Seattle Division which is meant to be in solidarity with Portland protesters. Weekend protests have received attention and anticipation, and it is yet to be determined whether or not any interaction between DHS agents and protest groups will take place.