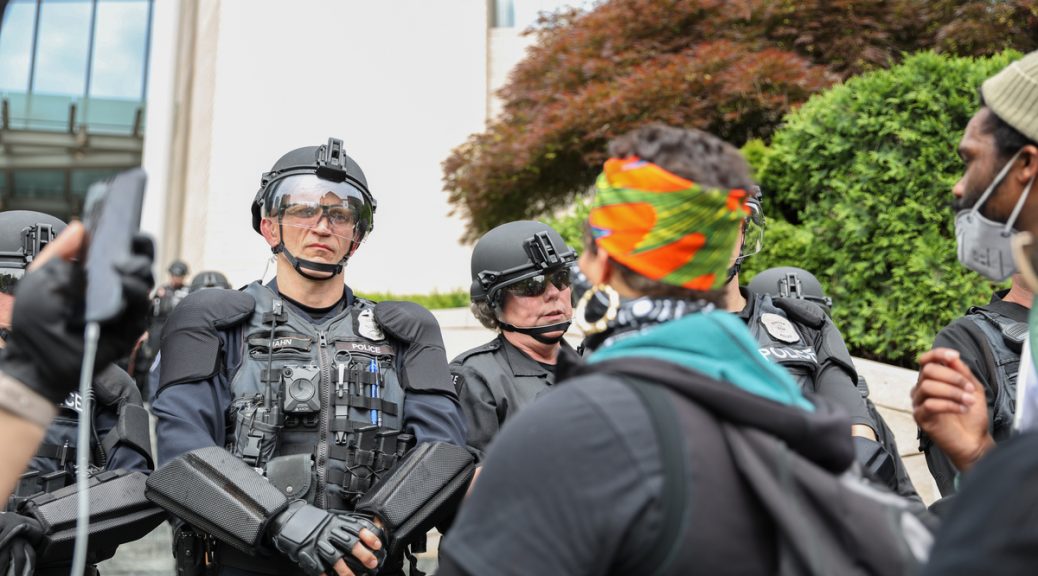 A month ago, I woke up to a man with a broken jaw and a story about being a secret CIA operative sleeping on my porch. Last week a woman amid a mental-health crisis followed me and my four-year-old to our car screaming. Over the weekend my husband was punched in the head by someone who appeared to be having a psychotic episode. A few nights ago, gunfire echoed through the hot, exhausted streets of my neighborhood.

In all these cases, people desperately needed help, and in none of these cases did I call the police.

Let me be up-front. I have never trusted or liked cops. I have an early memory of a cop who pulled us over and berated my mother until she cried. When I was fourteen, police arrested my friend out of our English class because she was a runaway (from abusive, homophobic parents).

The Seattle Police Department (SPD) gassed me and shot rubber bullets at me back in 1999. And there’s also the cop who leered down my shirt while rubbing his groin on my car door, the one who ticketed me for peeing outside (while ignoring my male friends doing the same), or the one who recently lectured my housemate for not holding her son’s hand on a busy street because her arms were full of groceries (he did not offer to help her with the groceries).

But as much as I have never liked cops — and because of that white-lady privilege of mine — I have typically called them in emergencies. Once when I saw a teenager shot a few years ago and once when I thought a man lying across the street in subzero temperatures might not be breathing.

As the Black Lives Matter movement has forced white Americans to confront the heinous realities of police brutality, inequities in policing, the school-to-prison pipeline, the prison industrial complex, and the weaponization of 9-1-1 (often) by white women, I have decided to no longer call the police in a situation where a Black or Brown person might be involved (unless they specifically ask me to).

This is especially important (and the very least I can do) as a white gentrifier in a historically Black neighborhood. It is also something I would encourage all white people to think very intentionally about.

As it happens, most of the situations I outlined at the top of this article involved white people. And as the #DefundSPD movement has grown here in Seattle, I’ve come to realize I don’t want to call the police on anyone. Do they help when someone is having a mental health crisis or a psychotic reaction to drugs? Or someone who is homeless? Or a neighborhood (city and nation) struggling with gun violence? In my limited experience, not really.

And sometimes they make things worse, as was the case when the SPD did show up on the scene of a shooting a block away from me last Monday night. As the blue and red lights reflected off our houses, neighbors began filtering into the street and gathered around the taped-off intersection, masks on and phone cameras up.

Friends and family of the victim, who lay under a sheet in the fluorescent glow of the gas station, were in shock and mourning. Some cried, some shouted and screamed, some collapsed in grief. One Black woman cried “No, please no,” and ran under the police line and toward the victim — whose youthful white sneakers were heartbreakingly visible.

“There’s one!” a young, white police officer yelled as he rushed toward the distraught woman, hand on his weapons belt, before the screams of the crowd (“Don’t fucking touch her!”) reminded him he was being watched and recorded.

This was a scene that needed EMTs, crime-scene investigators, trauma-informed social workers, community members working toward restorative justice and grief counselors. But did it need cops? Did it need twenty (mostly) white, (mostly) men with guns and a tendency to see the people in this neighborhood as criminals?

Similarly, the man asleep on my porch needed an ambulance (which I called by looking up the direct dispatch number), a trauma-informed social worker, a counselor, and a place to go home to when he was healed. Not police.

And the man who punched my husband needed a safe place to come down off (what I suspect were) methamphetamines. He needed a substance-use disorder counselor, a social worker and — based on the sleeping bag he had slung over his shoulder — he also needed a place to live. Not police.

The woman who was alternately crying and shouting on my street corner and ended up following me and my son in a panic needed — you guessed it — a counselor, a social worker and, based on the shopping cart filled with her personal belongings, a place to live. Not police.

But there was no number to call except the one that would likely dispatch the police. And I was left trying to explain to Malcolm what was happening.

“Why is she screaming mom? Why is she doing this?” he cried, frantically gripping my leg.

“In the same way people are sick in their bodies, people can also have sickness in their minds. She can’t help what she’s saying. It’s not her fault. She needs help.” I answered.

“I don’t know how,” I answered in one of those parent moments where you can’t come up with a euphemism for the crappy truth.

And my son, who has become obsessed with the idea that the police are part of the Star Wars “dark side” responded, “Even though she scared me, I still don’t think we should call the police.”

Sarah Stuteville is a writer, memoirist, educator, and non-profit media consultant currently pursuing a Masters in Mental Health Counseling at Seattle University. She taught journalism and media production at the University of Washington. Feminism, journalism, motherhood, relationships, and mental health are subjects of Sarah’s writings. Sarah has reported from over a dozen countries in the Middle East, East Africa, South Asia, and the former Soviet Union. She wrote a social justice issue column for the Seattle Times. Her memoir writing has been published in Mutha where her piece “No One Is Watching” was one of the most read on the site all year.  Her piece “Windstorm” won “Honorable Mention” in the Hunger Mountain Nonfiction Writing Contest; “A Girl’s History of Consent” was a finalist in the New Millennium Writings Nonfiction Awards. She also helped to co-found The Seattle Globalist, a non-profit journalism organization that trains diverse media makers.