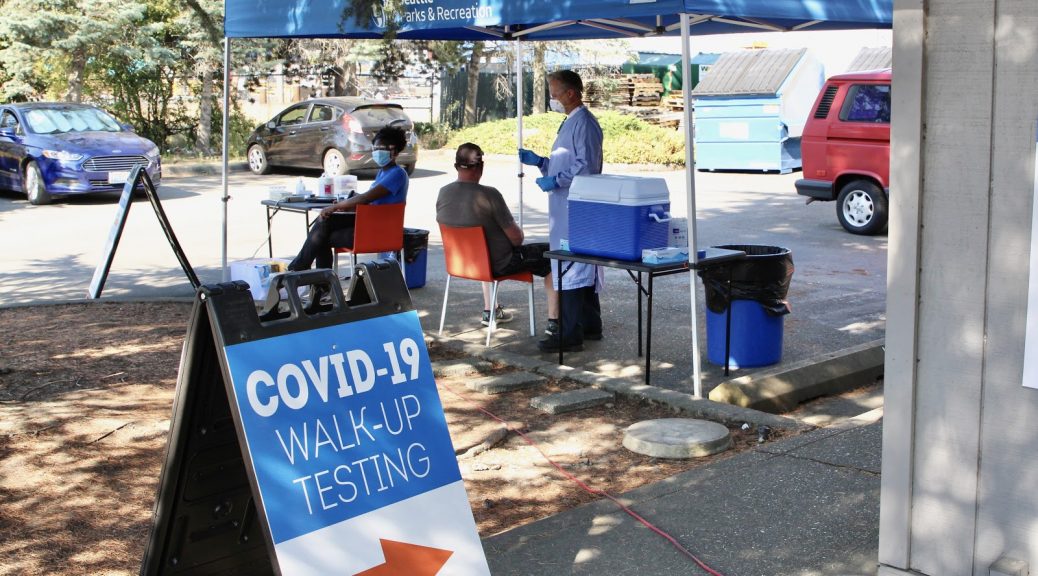 The number of COVID-19 cases has increased recently in South Seattle and South King County, which prompted a visit from the governor and spurred an increase in testing for COVID-19.

In the weeks since Seattle had an all-time high of 84 new positive cases in a single day on June 30, the city has tested more people than it ever has, swabbing around 2,000 people per day, except for the Fourth of July weekend, when tests dropped to fewer than 700 people. Before June 30, the city had never reached the 2,000-person mark for single-day tests. Thus far, July 24 holds the record (2,550) for the most people tested in a single day.

Before the summer surge in virus cases, Seattle’s highest seven-day average of daily positives was 48.57% results per day over a weeklong span. In July alone, there have been numerous seven-day periods that have topped 50 cases per day. While the city’s average dipped to 31 cases per day over a weeklong period, after the lack of testing around the Fourth of July weekend, positive cases have been steadily increasing to more than 40 per day since then.

The COVID-19 pandemic has affected the Seattle area for more than six months and testing is known to be an important step in curbing the effects of the coronavirus. If you or someone you know in South Seattle is curious about testing, there are a variety of options, but be aware that demand has created bottlenecks at certain stages of the testing process, from waiting in queues to getting your results.

Currently, there are a handful of organizations that provide free testing regardless of insurance. The City of Seattle has a site in SODO at 3820 Sixth Avenue South that offers drive-through and walk-up testing for anyone, regardless of insurance status. Appointments are encouraged for drive-through testing, but the walk-up area on the north side of the testing complex accepts people without a reservation.

Phone consultations with Sea Mar physicians are also available for people unable to come into the office. A doctor can help determine whether or not it’s necessary for the patient to be tested. An in-person visit to a testing site would still be required to confirm a positive or negative test.

In addition, Neighborcare Health has testing at its Rainier Beach and High Point locations, with drive-through and walk-up services available at both. Appointments made by phone are required and the options for appointment times vary daily.

Community-based health nonprofit HealthPoint has coronavirus testing sites in Kent, Renton, and Auburn — people are required to call and schedule a phone screening. From there, they will be evaluated for an appointment and, if needed, they can make a testing reservation.

Most testing sites get results back from third-party vendors within a week, but the City of Seattle’s SODO testing location and Sea Mar’s clinics often return results within 24 to 48 hours (but not longer than 72 hours). Some organizations such as Sea Mar have been trying to improve turnaround times by using multiple third-party vendors to process the swabs.

“One of the hardest parts has been relying on third-party vendors to turn around the data,” Nicholas Ramirez, the Vice President of Operations for Sea Mar, said.

Sea Mar began sending its test data to Quest Diagnostics to process the results, but delays piled up and it took up to a week to get results back. Sea Mar still uses Quest, but once another corporation, Quidel, developed a rapid test that returns reliable results twenty minutes after swabbing, Sea Mar started sending most of its tests to Quidel to be analyzed.

As local and national demand for testing has increased since the beginning of the pandemic, all healthcare organizations involved in testing for the coronavirus have had to overcome various hurdles along the way, from getting test kits to returning the results. Testing is now present in the hardest-hit areas of South Seattle and South King County. But getting the results back in a timely fashion is still a pressing issue for healthcare workers to tackle so that results come back before they’re no longer considered reliable.

Jack Russillo is a Seattle-based journalist living in the Beacon Hill neighborhood.