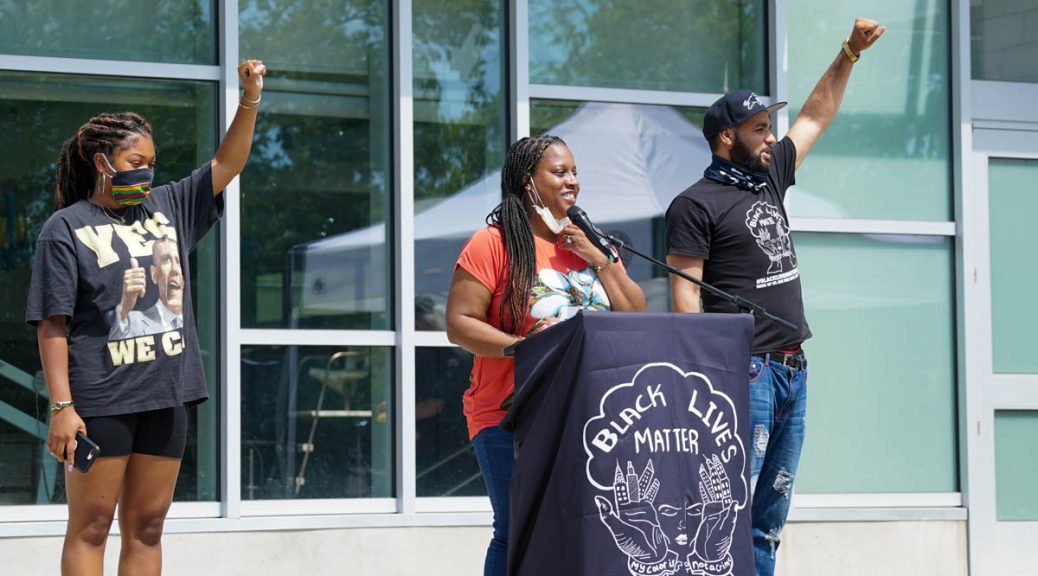 “What we mean by a community school,” Jesse Hagopian explained to me in the days before the rally, “is a school that has both anti-racist pedagogy and cultural, culturally relevant curriculum.” A recent study by the San Francisco Unified School District found that students who took ethnic studies courses had higher GPA’s, higher attendance rates, and higher graduation rates. Hagopian, who teaches ethnic studies at Garfield, believes that ethnic studies courses should be offered at all Seattle Public Schools.

The rally had an intimate feel, and featured speakers and performers with strong connections to South Seattle. Sebrena Burr a resident of the Rainier Beach neighborhood since 1973 and graduate of Rainier Beach High School in 1979, delivered a powerful speech about the murder of her brother and how that event led to her becoming President of the Seattle Council PTSA. Burr’s message to the parents in the crowd was to not only be active in your children’s schools but to also be engaged.  “Don’t hand the keys to your child’s future over to strangers”, Burr warned. She urged for parent participation in schools so that school PTA’s could look more like our neighborhoods.

Emijah Smith, one of the rally’s organizers, echoed Burr’s call for parents to become more active in the schools. She spoke about her own experience advocating for her children and reminded parents that school’s budgets are based on attendance. With current parents getting a crash-course in homeschooling due to distance learning during the Corona-Virus, Smith reminded parents that if schools don’t properly educate our children, “we don’t have to come back”.

Jerrell Davis, Co-Founder and Restorative Justice Director of WA-Bloc, presented a quick and poignant message also calling for parents to get involved in PTA’s, but he also called for budget reforms. He called out the discrepancy between the budgets for Seattle Police and Seattle Public Schools and also took aim at school lunches. Returning the topic of PTA’s, he called for pooling resources. If we want true equity, he said we must pool all the funds from school PTA’s and disperse them where they are needed most. He also challenged the media to properly report on our community and be sure to not write stories that side-swipe community movements.

While the speakers called for critical action, and put forth emotional testimony, the rally was full of fun and uplifting moments. There were numerous youth performances that engaged the crowd and displayed a wealth of young talent in our community.

A few highlights of these youth performances (there were many more not mentioned here), are  Skye Dior, an 8-year-old recording artist, delighting the crowd with a performance of her song Corona Rock, the Cleveland High School Cheer Team performing a routine (one of their cheerleaders also sang the Black National Anthem), and the rap duo Triple S [South Seattle Swagger] performed their song “Police Get Off MY Block”.

The entire rally was emceed by Angelina Riley, a Rainier Beach student and incoming president of the Seattle King County NAACP Youth Coalition, who helped lead a successful movement to remove police from Seattle Public Schools earlier this year. According to the Seattle Times, last year Black students only made up 14% of the Seattle Public Schools student body, but of the 99 students that school employees referred to police, 50% were black. Thanks to the efforts of students like Riley, the Seattle Police Department does not currently have any officers stationed in schools.

Riley concluded the rally with a reading of all 10 demands of the Black Education Now movement. She also reminded the crowd that a nation’s budget reflects what it prioritizes. Currently, the annual budget for the Seattle Police Department is a little more than $400 million. On August 3, Seattle City Council will vote on whether or not the Seattle Police Department will be defunded by 50%.

“You know, given that the general fund of King County is spent mostly on courts, prisons and policing,” Hagopian explained to me, “and given that the City [of Seattle] spends more than $400 million a year on policing, there’s plenty of money to make community schools. It’s just about our priority.”