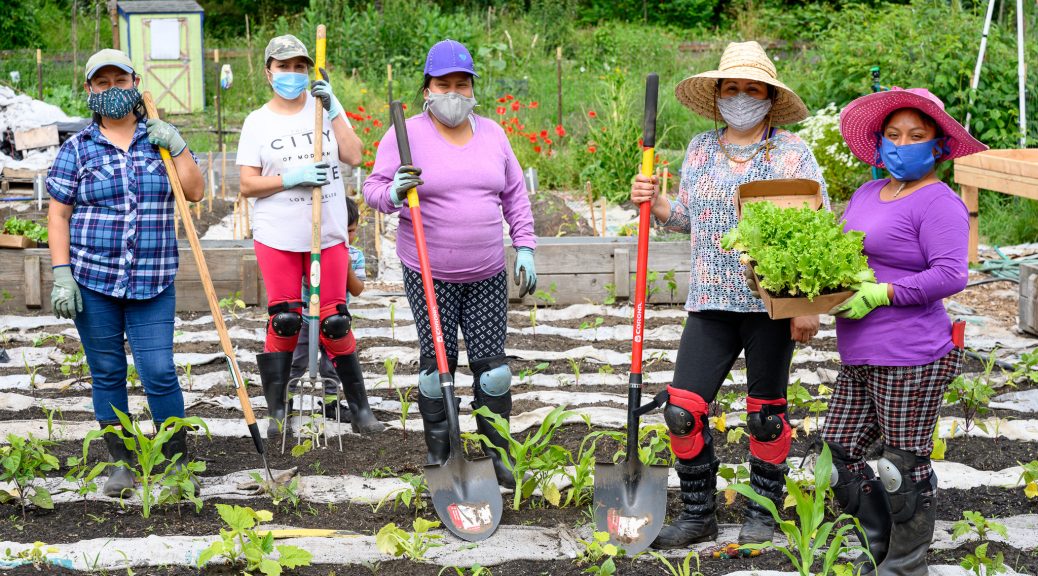 In this special Emerald series supported by NW Journalists of Color and the Facebook Journalism Project, photographer and writer Sharon H. Chang introduces the womxn and nonbinary farmers of color at the heart of Washington’s agrarian revival movement who are moving the needle towards not only a future livable planet, but a socially just one.

The air is comfortably warm at South Park’s Marra-Desimone Park on a late summer morning. Tall grasses line the dirt path to a little-known piece of farmland snuggled inside the park. All is quiet except for a small group working in the northeast corner. Two children run through rows of crops and nearby, their mother and four other cheerful women, known as the promotoras (community health workers), chat as they rake rows. There has been a crop failure because of rodents, but the women are undeterred. Well into their first full season, the promotoras have already transformed their land into an impressive Latinx-women-led farm called Salsa De La Vida.

The goal, said Villa Comunitaria’s Executive Director Analia Bertoni, is to create a self-sustaining cooperative food business led by the promotoras — Amanda, Luz María, Silvia, Roxana, and Santa — Latinx women from vulnerable families in the area. The women (who asked that their last names be kept confidential) are all mothers with children at home and renters living in mediocre residences, said Bertoni. “We live in a neighborhood where we suffer displacement and on top of thinking about healthy food, we have to think about how we pay the rent,” Bertoni explained. Villa Comunitaria is trying to support the promotoras in all layers of economic development.

South Park and nearby White Center are historic centers of Seattle’s Latinx community. Prior to the 1940s, there were few Latinx in the city. Their numbers grew during WWII, when farm workers moved to the South Park area from Eastern Washington to work in wartime industries. In the 1960s, their numbers grew again when second-generation Latinx were recruited to attend the University of Washington. The youth contributed greatly to Washington’s Chicano Movement and by the 1970s, Seattle’s Latinx community was thriving with the establishment of influential organizations like El Centro De La Raza (Beacon Hill) and Sea Mar Community Health (South Park).

Today, Latinx make up over 46 percent of residents in South Park, which remains a proud center of Seattle Latinx heritage. But it is plagued by racial and health disparities. More than half of the neighborhood are renters and 28.3 percent live below poverty level. The life expectancy of a South Park resident is 13 years lower than that of a wealthy, white resident in Laurelhurst, yet almost a quarter of South Park residents do not have health insurance. In recent years, the threat of displacement has grown with gentrification and, in the last six months, Latinx have become the group hardest hit by the pandemic in Washington State.

The research is abundantly clear. Decreased access to healthy foods increases risk of diet-related diseases like obesity and diabetes — conditions that already shorten life expectancy and now are top risk factors for infection and death by COVID-19. Improving access to nutritious foods is critical for the majority people of color living in South Park, and the promotoras are shining leaders in that needed health justice work.

Silvia grew up helping her father grow corn, beans, and wheat in Guatemala. Luz María helped her grandfather grow corn and garbanzo beans in Mexico, and later, her father had a small farm in California. Amanda’s grandfather has a tobacco farm in Mexico and her maternal family are fishers from Nayarit. In El Salvador, Roxana’s family are farmers who grow loroco, an important food source for Salvadorians. And Santa is from the Guatemalan countryside where she helped her family grow everything from aruda, epazote, and frijoles to calabaza and cilantro.

Now, the promotoras are proud to be Latinx women building Salsa De La Vida for their South Seattle community, especially in these difficult times. The original plan was to grow tomatoes and jalapeños for Mexican salsa that would be sold, hence the farm’s name. However, because of coronavirus, the women decided it was important to do a Community Supported Agriculture (CSA) project instead, to provide their neighborhood with local, fresh produce. With mentorship from urban farmer K.C. Steimer, the promotoras have made amazing progress. They are growing tomatoes, cauliflower, melons, the “three sisters” (beans, corn, and squash), radishes, and peppers. Raised beds along the perimeter boast lettuce, broccolis, chard, spinach, and herbs. Their first farm share went out July 3.

The promotoras love being at Salsa De La Vida and sang the Emerald its praises in Spanish. Amanda said she enjoys being connected with the earth. Similarly, Luz María said, “I like it because it’s close to nature [and] I relax here.” Silvia agreed, saying when she works in the fresh air and soil, “I forget everything that’s going on.” Roxana added, “I also like it because it’s a free space and the children like to come.” Santa exclaimed, “I would like to be here all day and even sleep here!”

For sure, Salsa De La Vida has set its sights on continuing food justice work through the pandemic and beyond. Silvia would love to farm more when her children are older. Santa would like to open up Salsa de la Vida for youth and educational programs. Amanda said becoming a full-time community farmer would be her dream job. In the interim, Steimer is helping the women gain more farming skills and build sustainable infrastructure. The promotoras are learning a lot and thinking deeply about why they farm, said Amanda. They know they are strong Latinx women making important contributions and that their community needs them.

Translation during interviews with the promotoras was graciously provided by Analia Bertoni.