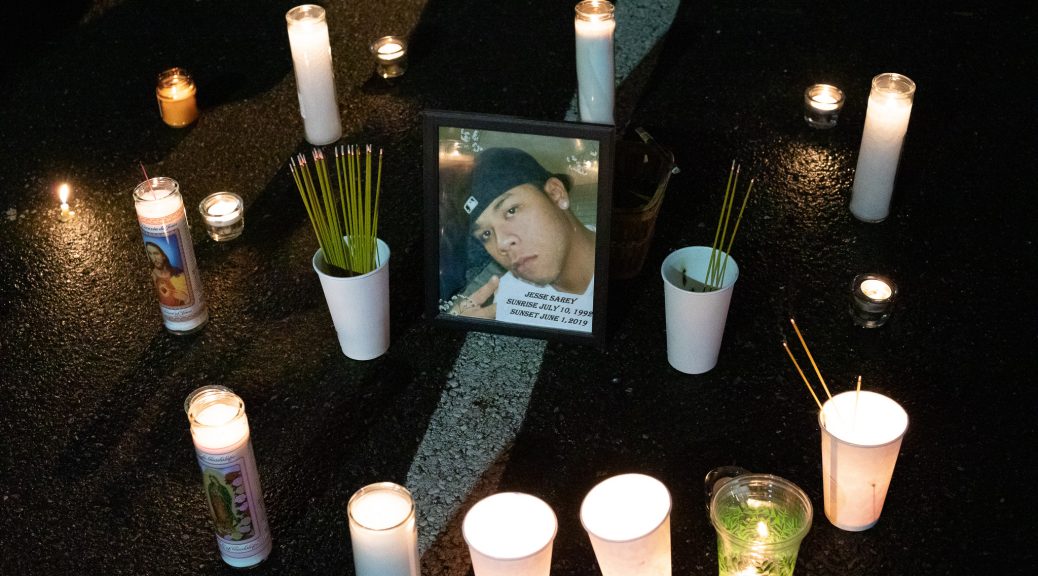 A rally for justice against police brutality will start at 6:30 p.m. Thursday, Aug. 6 at the Auburn Police Precinct. Community members are invited to stand in solidarity with the family of Jesse Sarey, a 26-year-old who was killed by an Auburn police officer on May 31, 2019.

Sarey was killed by Officer Jeff Nelson, who has worked for the Auburn Police Department since 2008. In that time, Nelson has been involved in at least 65 use-of-force incidents and has committed three of the five officer-involved shootings in the entire police department since 2011. Before shooting Sarey last year, Nelson shot and killed 48-year-old Brian Scaman in 2011 and 25-year-old Isaiah Obet in 2017. All three were shot multiple times by Nelson, and all three died from gunshot wounds to the head.

According to a lawsuit filed by Isaiah Obet’s brother against Nelson and the Auburn Police Department, Nelson has not been disciplined, retrained, or reassigned for any of his actions. Nelson has been on paid administrative leave since the day he shot Sarey, receiving his full salary, which could be more than $90,000.

“I don’t know why they’re above the law. People in law enforcement continue to get away with horrible acts like this,” said Elaine Simons, Sarey’s foster mother and a main organizer for Thursday’s rally. “At the end of the day, I just want to know that another family won’t have to go through this again.”

The rally will begin with a welcome ceremony from the Muckleshoot tribe, followed by various speakers from some of the BIPOC families that have been impacted by police killings in the area. Among those present will be the family members of Sarey (Cambodian), Obet (Pacific Islander/Marshall Islander), Enosa “EJ” Strickland Jr (Samoan/Hawaiian), Giovonn Joseph McDade (Pakistani, Italian, and Black), Renee Davis (Muckleshoot), Charleena Lyles (Black), Malik Williams (Black), Iosia Faletogo (Samoan), and Leonard Thomas (Black).

“There is no colorism in this family,” said Katrina Johnson, a cousin of Charleena Lyles, a core member of Families are the Frontlines, and a key organizer for the rally. “The reality of the situation is that law enforcement and police kill all kinds of people — white people, Black people, Native folks, Asian/Pacific Islanders, any individual. We are all a part of that one family. Everybody’s blood is red. They all died at the hands of law enforcement and so it doesn’t matter what color you are, we don’t want to be in the oppression Olympics with one another trying to figure out who has it worse. Rather, we want to work together with the same goal of curtailing police brutality.”

Aside from stations with snacks, water, and personal protective equipment for those attending the rally — which is meant to be a family-friendly event —  there will be medical and security teams in the vicinity. There will also be a petition endorsing the families’ demands and holding the Auburn Police Department more accountable.

“State violence is happening to all sorts of communities and I hope that this could help tie together the solidarity between Asian/Pacific Islanders, Black, and Indigenous groups that are being affected by white supremacy,” said Komalpreet Kaur Sahota, an organizer for South King County and Eastside Mutual Aid and ForFortyTwo. “I think it brings forward the ways we’re all harmed by this system, and it’s liberating to know that we can be in solidarity with one another. More than anything, it’s about centering the families that have been harmed by the police state.”

After speaking, the impacted families will also list their demands for justice, which are: to get clear answers on the handling of Officer Nelson’s actions, to have him fired and charged with murder, to create a requirement of body cameras on all Auburn police officers, and to defund the Auburn Police Department by 50 percent and reinvest those funds in disenfranchised communities in the area.

Another set of demands includes urging public entities and individual police officers to drop a series of lawsuits filed against King County Executive Dow Constantine that have stopped inquest reforms from moving forward. The cities of Auburn, Federal Way, Renton, and Kent, as well as the King County Sheriff, have all filed litigation that challenges many aspects of the inquest system, especially the publication of internal police policies, the disciplinary history of officers, and expert testimony.

“I would hope that they would be receptive to the family demands and give us some of the details and answers,” said Johnson. “How many excessive uses of force are too many before you take more action? Because obviously corrective action hasn’t been taken. If one individual is responsible for three of five uses of deadly force, that sounds to me like there is an issue that is not being discussed.”

On June 9, Seattle City Attorney Pete Holmes announced the withdrawal of the City of Seattle from legal challenges to the inquest process, which opens the door for more transparency and accountability regarding police brutality cases in Seattle. Other families and their cases, however, are still waiting for the jurisdictional lawsuits to be dropped so that they can move forward with obtaining truth, justice, and accountability.

“It’s [the lawsuits holding up the inquest process] a way to prevent any families from getting inquests,” said Johnson. “There are more than 30 families out there waiting, but until those lawsuits are hashed out, no family will be able to have an inquest, no family will get answers for what happened to their loved ones. And that’s what so many families are trying to deal with and curtail right now.”

“As an impacted family member, I’d rather just be grieving and allow the court system to make this happen,” said Simons. “But we’re a year out and we’re not even at an inquest stage yet. As time keeps going. If we don’t talk about Jesse and the other victims in the world, then it just continues to go on. If we don’t get Officer Jeff Nelson fired, then there’s potentially a fourth victim out there waiting. I’m afraid that a fourth family could lose a loved one because of him, and that scares me.”