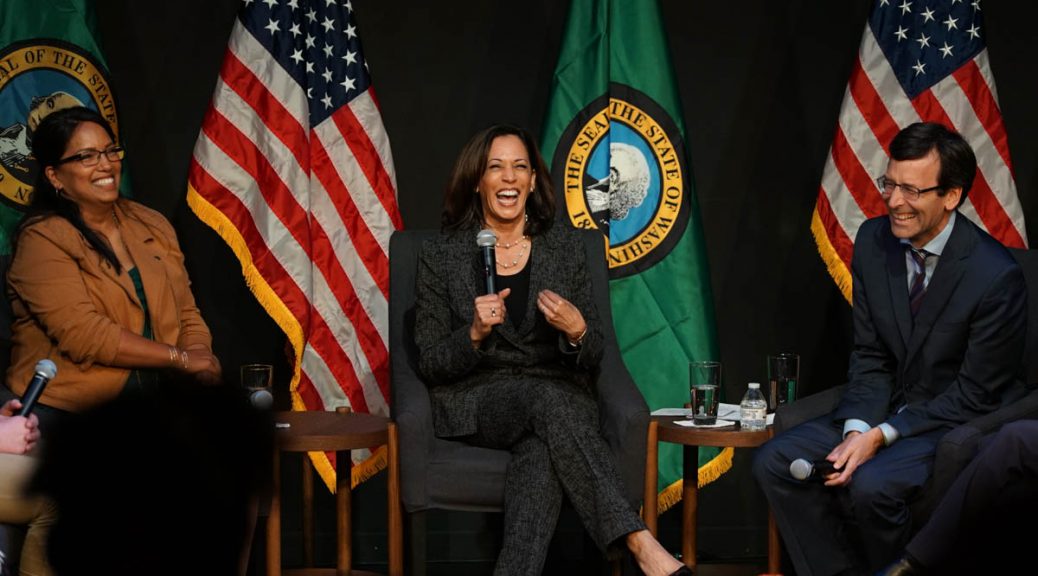 From her official U.S. Senate biography:

In 2017, Kamala D. Harris was sworn in as a United States senator for California, the second African American woman and first South Asian American senator in history. She serves on the Homeland Security and Governmental Affairs Committee, the Select Committee on Intelligence, the Committee on the Judiciary, and the Committee on the Budget. After earning an undergraduate degree from Howard University and a law degree from the University of California, Hastings, she began her career in the Alameda County District Attorney’s Office. In 2003, Kamala became the District Attorney of the City and County of San Francisco. Among her achievements as District Attorney, Harris started a program that gives first-time drug offenders the chance to earn a high-school diploma and find employment. Having completed two terms as the District Attorney of San Francisco, Kamala was elected as the first African American and first woman to serve as California’s attorney general. In this role, she worked tirelessly to hold corporations accountable and protect the state’s most vulnerable people.

While she dropped out of the 2020 presidential race early, she was an audacious speaker on the debate stage and a fierce interrogator of a number of Trump allies coming before the Judiciary Committee.

Harris is the daughter of an immigrant Indian American mother who is an activist and breast cancer researcher. Her father is an African American immigrant from Jamaica and was a prominent Stanford economics professor.

Toshiko Grace Hasegawa, community activist and director of the Washington Commission on Asian Pacific American Affairs responded with one word: “AHHHHHHHHHHHHHH!!!!!!!” Then she went on to say, “First Asian American and African American … first VP pick in American HERSTORY!”

Rebecca Saldaña, 37th district state senator, said her young daughter was surprised that there’s never been a woman vice president or president and added: “Kamala Harris is formidable and I think she is the right choice to stand with Biden and stand up against the bully currently in the White House.”

Attorney Mika Kurose Rothman, who worked in the Obama White House in the General Counsel  and Public Liaison offices, had this to say: “I can’t wait until she gets on that debate stage with Mike Pence!”

Beacon Hill resident and so-called “faithless elector,” 2016 Electoral College member Esther “Little Dove” John, was rooting for Stacey Abrams for vice president, but said of Harris, “She is a wise choice. I will support her gladly. Stacy later [sic].” Within minutes after the media announcement, Stacey Abrams quickly endorsed Harris.

Unity seems also to be the focus of the other women who were under consideration. As one MSNBC commentator noted, Joe Biden brought a number of outstanding women to the attention of the American people, and all of them will be better off for having been considered.

Sharon Tomiko Santos, longtime 37th district state representative said “I am thrilled that Vice President Biden selected Senator Harris, a smart and savvy individual, as his running mate. Her lived experience as a bi-racial Black Asian woman from Oakland, California, will provide solid ground for building a campaign — and an administration — that is responsive to the urgent needs of our diverse nation.”

Seferiana Day, partner in CD Strategic, Inc., a consulting firm that manages local political campaigns, and a lead staffer in the Elizabeth Warren presidential campaign said: “This election is more
important than ever, and I’m excited to see the energy and representation that Kamala Harris will bring to the ticket and to the debate stage. Her nomination is historic, and my hope is that
young girls of color will be able to see themselves in our elected leadership.”

With just 84 days until November 3, let the race begin!

Sharon Maeda is Interim Managing Editor of the South Seattle Emerald. She has been a “political junkie” and a campaign volunteer since she was 14 years old. She served in the Clinton Administration as Deputy Assistant Secretary for Public Affairs to HUD Secretary Henry Cisneros.