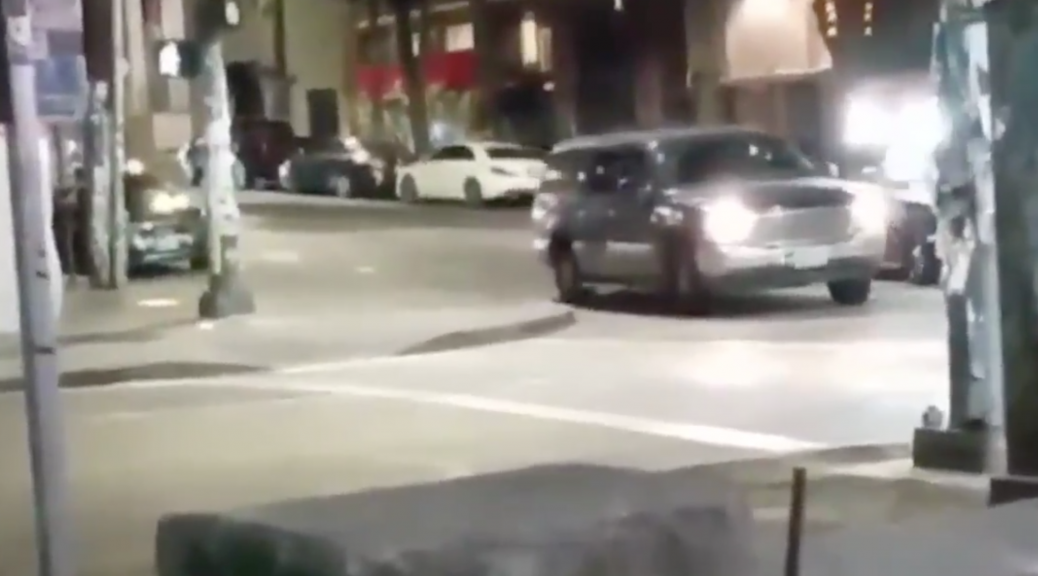 The video begins with what appears to be a GMC lurching from a dead stop onto a sidewalk full of people at the intersection of 11th Street and East Pine Street in Capitol Hill on the evening of Aug. 12. As the big blue pickup barrels towards them, people scramble out of the way screaming. One person dives through the bushes to get away from the car.

Later in the video — which appears to show a separate video shot a short time later, and appears to be cut part way through — the person driving the car appears to claim to be a Seattle Police Department (SPD) officer, listing off his badge number as 6645. However, because the video — which was posted to Twitter soon after the incident took place — is not visually clear, the Emerald could not confirm if this person was indeed an officer employed with SPD.

When asked whether the officer to whom the badge number belongs was on duty in the area that night, Truscott said that because the matter has been referred to OPA, “we would refer you to them for further questions about the incident.”

The Emerald originally sent SPD the video and asked about its contents on Sunday, when the OPA was not open for incident referral. The Emerald has reached out to the OPA for comment and will update this story if it receives anything beyond the office’s automated reply.

As of this writing, it is unclear who took the videos in question and who put them together into one consolidated video, which the Emerald has included below. However, the video-taker appears to have a conversation with the person who drove the GMC onto the sidewalk.

On the morning of Aug. 18, after the original version of this story was published, the Emerald received a link to the full, uncut version of the video via a tip on Twitter. In the video, the driver appears to sound out part of his name as “tee-jin.” The Emerald has included the video below.

The conversation in the video the Emerald originally used to report this story opens with the video-taker saying, “I saw it,” to which the driver responds, “No, you didn’t.”

“What did I see?” the video-taker asks.

“I don’t know, what did you see?” the driver asks.

“I saw you hit, almost, a bunch of people,” the video-taker replies.

“Did you see the guy who ran that I was trying to catch?” the driver asks, not denying that he drove the car onto the sidewalk. He also does not explain why, if he was chasing someone, he started from a dead stop, rather than continuing onto the sidewalk in an already-moving car.

According to federal law, emergency vehicles are allowed to “disregard traffic control devices,” “exceed the speed limit,” and “obstruct traffic.” However, according to the same federal law, these allowances “do not relieve the operator from the duty to operate with due regard for the safety of persons and property.”

It is unclear if there are any federal penalties for an emergency responder, such as a police officer, running afoul of this law, but this Washington State law states that “[a]ny person who drives any vehicle in willful or wanton disregard for the safety of persons or property is guilty of reckless driving. Violation of the provisions of this section is a gross misdemeanor punishable by imprisonment for up to three hundred sixty-four days and by a fine of not more than five thousand dollars.”

The conversation in the video continues for another minute or so. The video-taker asks the driver, “Are you the one who called them a bunch of cockroaches?” It is unclear what incident the video-taker is referring to, but the driver responds, “Yes, yes.”

The video-taker then asks the driver for his badge number. The driver responds, “6645,” and goes on to say what sounds like, “I think it is very, very silly.”

“What is?” the video-taker asks.

“Running like cockroaches,” the driver responds, before reassuring the video-taker not to worry, because “you’re all going to defund us, anyway.”

The video-taker asks why the driver drove onto the sidewalk, to which the driver responds, “Trying to catch a bad guy.”

“Did you catch him?” the video-taker asks.

After a jump in the video that appears to be where the video either was cut or stopped and started again, the driver says that he stays in Seattle “because they [the City] pay me, like, $200[,000] a year to babysit you.”

“I babysit these knuckleheads up here every night because they smash up all the businesses,” the driver continues. “That doesn’t upset you?”

“It does upset me when people smash stuff, but it upsets me more when I see a car drive up onto a sidewalk with a bunch of people standing there,” the video-taker responds.

“That upsets you more?” the driver asks.

“No,” the driver responds.

“You don’t think you could have?” the video-taker asks.

“I’m a professional,” the driver replies.

The Emerald also asked SPD if the department has a standard operating procedure (SOP) governing the use of unmarked police vehicles on sidewalks and what such an SOP would dictate in this situation. SPD did not answer this question, and instead said that “[t]here are several sections of the manual regarding operation of department vehicles,” and included a link to the manual in question.

The manual, which was last updated in March 2018, does indeed have several sections regarding operation of department vehicles. This section that defines an emergency response as “[w]hen an officer operates an authorized police vehicle in a manner that is substantially outside of a normal traffic pattern” states that officers may only drive in such a manner when the need outweighs the risk.

This section regarding vehicle eluding and pursuits states that unmarked police units without emergency equipment will not engage in pursuits. It is unclear if this also applies to pursuits where the person officers are pursuing is on foot, as they would have been on the evening of Aug. 12. However, the section that refers to emergency vehicle response references this Washington State law, which says that though an emergency vehicle operating as a police vehicle “need not be equipped with or display a red light visible from in front of the vehicle,” it must “use audible signals when necessary to warn others of the emergency nature of the situation,” unless parked or standing.

The incident on Aug. 12 follows a little more than a month after 27-year-old Dawit Kelete drove onto a barricaded interstate ramp and hit and killed Summer Taylor, a 24-year-old Black Lives Matter protestor who was marching in the July 3 Black Femme March on Interstate 5. Kelete hit Taylor and 32-year-old fellow protestor, Diaz Love, before speeding away. The King County Prosecuting Attorney’s Office charged Kelete with reckless driving, vehicular assault, and vehicular homicide.

A month before this, Nikolas Alexander Fernandez drove a black car into a group of Capitol Hill protestors and shot Black Lives Matter protestor Daniel Gregory, wounding him. King County prosectors charged him with first-degree assault. Days later, another man reportedly drove his car into cyclists at a peaceful youth protest at the SPD West Precinct, destroying at least one bicycle. The cyclists were members of the Seattle Bike Brigade, who attend local protests specifically to protect protestors from vehicles.

Featured image is a screengrab from the video included in the article.