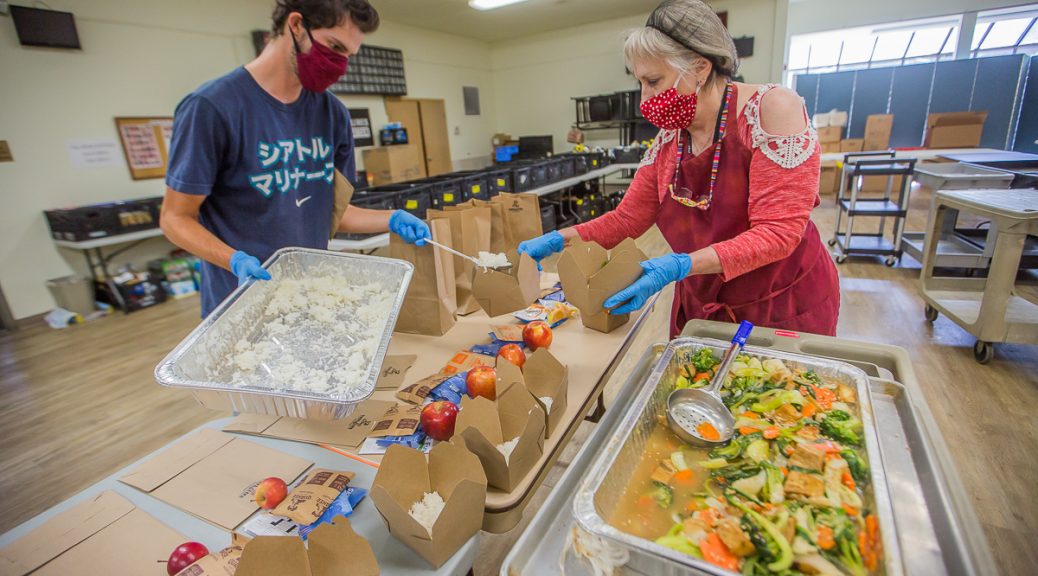 Shiny, blushed coral apples sit in rows on the tables in front of brown paper bags. Lined up almost perfectly straight, one right next to the other, they almost look like little cherubs, dutifully waiting their turn to leap into a bank of puffy clouds.

But they aren’t mythical creatures. They’re vital sources of nutrition for the more than 160 seniors who rely on the Southeast Seattle Senior Center’s hot meal program. On this particular Thursday morning, a handful of masked volunteers works to prepare the day’s meal, a steaming-hot, colorful mix of vegetables cooked with golden cubes of fried tofu served over a couple scoops of white rice.

The center’s director, Lynda Greene, saw the storm coming in March, right before all but the most essential businesses shut down to stop the spread of the novel coronavirus. She had made the decision to shutter the senior center a week before the official closure notices came, and she and the center’s staff were serving bagged lunches that people could pick up from the center. At that point, they were only serving about 15–20 people.

But since then, need has “grown tremendously,” and the center is currently operating a food delivery program, Greene said. Much of the need for food delivery stems from other younger Washingtonians’ refusal to wear masks, not because seniors would prefer to get food delivered to them, she said.

“Most of the seniors that we’ve spoken with … believe that wearing masks will help keep them safe. And they are not interested in being around anyone who is not wearing a mask,” Greene said in a July phone interview with the Emerald.

Linda Lewis, who used to run the center’s thrift store, runs meal prep every morning. When the Emerald visited in August, she was busy spooning rice into takeaway boxes that would later be packed into the brown lunch bags. Speaking over the music — the Beach Boys’ “Kokomo” — she described how the program has grown since March and how they now find themselves delivering meals to neighborhoods and locations across Southeast Seattle.

“Skyway used to be four people, and it’s 12 [people now]. [Delivery driver] Francis [serves] over 50 [people], and … I think there are two new ones coming in today, but I am not sure where they are going to be going. … Brighton is holding pretty steady at 60 [people],” Lewis said, indicating a large piece of art paper that has the daily tallies of the number of and destinations for meals.

Lewis said that she isn’t worried about being able to get these meals out, because “I have a dedicated group of volunteers that come in.” But she does expect the need to continue to increase, particularly in the autumn, when experts expect the virus to pick up speed again.

“I don’t know how long — how far we’re going to carry this,” Lewis said of the meal program. “I imagine it will grow, and I have no idea what the cap is going to be for us. But there’s always going to be a need — and Lynda Greene is big about filling the need. … She is a superhero.”

Greene is indeed dedicated, but also told the Emerald that she doesn’t know how long the meal program can continue to run. She said she is extremely grateful to people who have set up recurring Amazon deliveries, but acknowledged that, at some point, “donor fatigue is going to set in.”

“We have to be prepared for that, when we are not getting those donations anymore. We are [applying for] grants [from] organizations and foundations that will help us continue to support our food program, our lunch program during COVID-19,” Greene said. “And, so far, we’ve been successful, so we’re … socking it away, because we know it’s going to happen.”

When she spoke with the Emerald in mid-July, Greene estimated the center would “be good for about another month or so,” if grant funding and donations dried up the next day but not much further beyond that.

In addition to grant funding and private donations, the center has also partnered with The Urban League of Metropolitan Seattle that helps the center accrue food — Greene calls the organization “a true lifesaver” — as well as with the Renton Emergency Feeding Program. But this doesn’t mean more donations from private citizens would go amiss or create too much of a surplus for the center to handle, particularly since the lunch program continues to grow. When the Emerald asked Lewis in August how readers could help, she said donations of anything — vitamins, money, food — will help. The best food items to donate, she said, are packaged items — packaged cookies, in particular, which she said seniors really like.

“Cookies are what we always seem to run low on,” Lewis said.

In addition to budget and resource constraints, the center is also trying to help triage seniors’ mental health. Even with volunteers delivering food every day, seniors who are forced to self-isolate because other Washingtonians don’t care enough to wear masks to protect other people are suffering from increasingly poor mental health. Greene said the center is still operating the phone tree it started up in March to make sure it could stay in touch with all its seniors. Anecdotally speaking, there has been a noticeable uptick in depression amongst the seniors who are calling in, Greene said.

“Easily 30%,” Greene said, when the Emerald asked Greene what percentage of callers have been calling in about depression. “Every two weeks, when we are doing calls, [the number of people with depression] just goes up, and continues to increase.”

What’s even more concerning for Greene is the fact that the center can’t handle the need alone, and the number of people who call in with severe depression is quickly growing. But that number won’t dwindle, she said, as long as the virus and its associated disease, COVID-19, sticks around and the number of cases continues to rise.

Still, the center does what it can. Lately, it has taken to including a daily activity sheet in seniors’ hot meal bags, in order to encourage them to keep their minds active and engaged, in order to help stave off dementia and other diseases associated with mental inactivity and loneliness.

But even people unassociated with the senior center can help. In addition to wearing a mask — which Greene believes should be mandated, and should come with a penalty, for those who choose not to wear a mask, as “it doesn’t cost you to do it, but it could cost someone else their life” — people can help their older neighbors who aren’t going outdoors by calling them, or going over to their houses or apartments to talk with them through screen doors or outside their windows.

Those who are interested in visiting seniors — or anyone else — this way should always wear a mask that completely covers their nose and mouth, and should not at any time pull it down or otherwise futz with it. Seemingly simple acts like this can tremendously help isolated seniors’ mental well-being, Greene said.

“Whatever you can do to really communicate with seniors will make a huge difference in their lives,” Greene said.