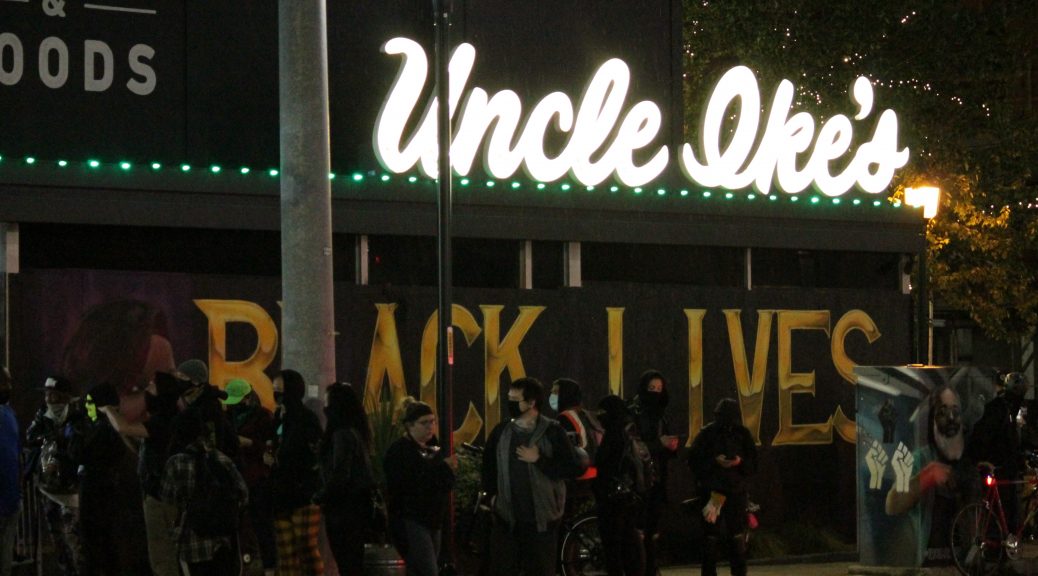 Since the Seattle protests began in late May, demonstrators have gathered in front of various police precincts and city buildings to protest police brutality and systemic anti-Black racism. Two protests this summer, including one held two weeks ago, have shifted to focus on the issue of gentrification in general, and on one pot shop in particular: Uncle Ike’s.

On the evening of Aug. 7, a rally organized by the Engage Team, a group of young activists who posted their first rally in July of this year, gathered in front of the pot shop’s newly-opened location on East Olive Way, and marched to the original Uncle Ike’s storefront on 23rd Avenue and East Union Street, in the Central District (CD), calling for a boycott of Uncle Ike’s weed shops and a halt to predatory development.

“The main goal is to pretty much expose gentrification, expose what’s going on and how it’s working in Seattle,” said Peyday, one of the organizers with the Engage Team. “We want to expose the little details of racism that people don’t really understand, and so now we’re trying to expose gentrification as well.”

In addition to marching in front of his stores, the protest directed specific demands to the pot shops’ owner, Ian Eisenberg, demanding that he invest 15% of his monthly profit to an anti-gentrification or land acquisition fund and that he agree to a recorded meeting “to discuss his role in gentrification and the impact on the Black community in Seattle,” among many other demands.

Such protests this summer have brought new scrutiny to the Uncle Ike’s chain. However, protests against Ian Eisenberg and his marijuana shops are not just limited to the one held on Aug. 7, or the protest a few months ago, when his storefront on East Olive Way suffered damages after a different group smashed windows and tagged the word “Gentrifier” on the building.

Uncle Ike’s opened on 23rd and Union in September of 2014 and in the first week, Eisenberg sold an average of $13,736 worth of marijuana per day. One month later, next-door neighbor Mount Calvary Christian Center (MCCC) filed a lawsuit against Eisenberg, the City of Seattle and the Washington State Liquor Control Board in an attempt to revoke the state license to operate the pot shop due to the store’s proximity to the church’s Joshua Generation Teen Center, right across the street, in violation of Section 6.8 of Initiative 502.

MCCC, pastored by Bishop Reggie Witherspoon, began in South Seattle in 1987 and moved to 23rd and Union in the late 90’s. It has acted as a place of spiritual significance for many members of the Black community in the CD. Witherspoon says he was not initially aware Eisenberg was planning on building a pot shop next door to his church, so he agreed to let him put some building equipment on church property while the builders dug the foundation for the new shop.

Witherspoon only realized later the shop would be used to sell marijuana. To Witherspooon, this felt like a sign of disrespect to children of color and to the church.

“I believe, and I made clear, that had it been in some of the white communities, they wouldn’t have allowed it right there, that close to a teen center, and so I made that very clear,” Witherspoon said.

In 2019,  the property the church stands on, the parking lot next to it, and the teen center property, were put up for sale.  Since then, the Black-owned and Seattle-based developer, Gardner Global, purchased the teen center property, where it plans to build a 64-unit “multi-family housing project” which will consist of a community space along with both affordable and market-rate housing units. The property the church stands on is currently listed as “pending.”

Other members of the CD’s Black community, such as the rapper Draze, echoed a similar sentiment in regards to the church.

“This would never happen in the Black community,” Draze said. “We would never have allowed a pot shop to be next to a church, not because we don’t like cannabis, but because morally, the way we look at things, whether it’s a mosque, a church or anything we just have certain boundaries that we don’t cross.”

Draze filmed the 2016 video for his song, Irony on 23rd, in front of the relatively new Uncle Ike’s location. In it, he mentions attending church and becoming a member of Mount Calvary Christian Center, where he led a youth group which would do street outreach on 23rd and Union. During that time he remembers incidents of police brutality and how young Black people were sent to jail for selling marijuana on that corner.

Uncle Ike’s did not mark the beginning of gentrification in the CD and it isn’t the only pot shop in the area. Instead, a large portion of the controversy surrounding the shop pertains to the particular location of the store and the history of marijuana distribution on that corner.

“You have young men and women going to jail, literally, for selling marijuana, and here we are some years later and this guy’s making hundreds of thousands of dollars,” Draze said. “It really makes you come back and say ‘Why is it okay when they do it, but when we do it it’s somehow the war against drugs?’”

For people familiar with the history of 23rd and Union, that sentiment represents one of the points of frustration with having Uncle Ike’s presence on that specific corner.

MCCC dropped their lawsuit in 2015, after a judge dismissed both of the church’s proposed measures for a preliminary injunction and a temporary restraining order. Witherspoon maintains they would have attempted to take the lawsuit to the federal government but were unable to do so financially.

“We could not keep up with everything financially so we had to bow out, unfortunately, and just kind of acquiesce to it,” he said.

Despite this, the fight against Uncle Ike’s continued in other forms, such as the 4/20 protest in 2016, when organizers such as Africatown, the Seattle-King County NAACP, Draze, Black Book Club, and MCCC hosted a community march from Garfield High School to Uncle Ike’s.

Protests against Uncle Ike’s have not always been free of controversy however, and on April 1, 2017, Ian Eisenerg uploaded a video to Facebook in which Omari Tahir-Garrett, a controversial, long-time CD activist, directed anti-semitic comments toward Eisenberg, who is Jewish, telling him to “go back to Germany” and to “let them Nazis get on you again.”

At the most recent protest on Aug. 7, at least one individual spat on Black security guards working at Uncle Ike’s who are also CD residents. Organizers said the assailant was not affiliated with the Engage Team.

Overall, the state of 23rd and Union remains a source of pain for long-term residents of the CD.

While Eisenberg failed to respond to multiple requests for an interview, in past interviews with other outlets, he has maintained that his business ventures have not displaced anyone and that people are seeking “a villain to put a face to their cause.”

He also made a distinction between displacement and gentrification, and advocated against displacement and for higher housing density as a possible solution. Although he has said past marijuana-related arrests on 23rd and Union were wrong, he has conveyed it’s inaccurate to liken the sales at his store to informal drug sales.

In 1960, 90% of the Black population in Seattle had been pushed to the Central District through redlining. The 92% white city of Seattle squashed efforts to pass a 1964 ordinance which would have allowed residents to live anywhere in the city regardless of race. An open housing ordinance wasn’t passed until 1968 following efforts by CD residents.

As of 2019, the white population in the Central District had increased to 60% while the Black population had been reduced to roughly 15%, with Black residents finding it more and more difficult to stay due to high property taxes and pressure from developers to sell their homes.

In Irony on 23rd Draze laments, “The ‘hood is for sale.” Now, he says, the CD has gone through such substantial changes, even since 2016, that his relatives from out of town don’t recognize it when they come to visit.

“Well yeah the ‘hood was for sale and it’s been bought and built up, look at it now,” Draze said. “What you see, in particular on that corner, that level of development, it is wow, it’s bizarre.”

A long-time CD resident and video journalist, who goes by Proof, relayed that going through the CD can feel like being a stranger in your own town.

“The people who are moving into the CD right now are mad at us for being there,” Proof said. “You know, they’re looking at us like we’re not supposed to be there, when all actuality is, it’s where we were.”

Bishop Witherspoon himself can’t afford to live in the CD, and while the church still holds regular meetings on 23rd and Union, they’ve lost congregants due to the high property taxes and cost of living. Even for church members who make the commute on Sundays, there’s often not enough parking and he’s had members tell him they drove to the church but had to keep going because there was nowhere to park.

In addition, Witherspoon says there have been difficulties with Uncle Ike’s customers not respecting church property and becoming defensive when asked to leave. While he tries to be welcoming of new residents to the CD, he believes many of the white residents aren’t accepting of Black leadership.

“It has been, on every front, a fiasco for our church, but we just keep pressing forward,” Witherspoon said. “We are forced to have to rethink what our next move is because we serve hundreds of people but we want to serve thousands of people, but we don’t have the capacity to do so.”

Organizations such as the King County Equity Now coalition have called for a halt to all predatory development, demanded that the city accept existing Black-led community proposals on how to maximize underutilized land, and demanded the establishment of a $1-billion anti-gentrification, land acquisition fund to help the Black community reclaim property in the CD.

While the CD has shifted, Draze is still making music and has adopted a more solution-focused approach to his music. His new release, Building Black Wealth, focuses on how to rebuild the Black community financially and physically. In reference to the protests against Uncle Ike’s, he expressed pleasant surprise that people are still fighting for this issue and encourages protests to continue peacefully.