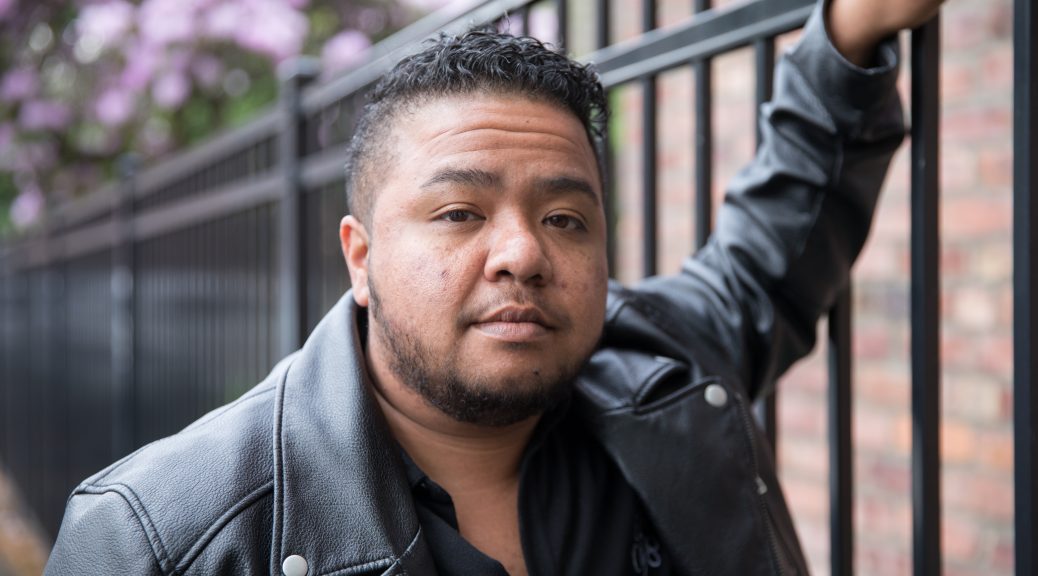 Ebo Barton is an Los Angeles-born poet, performer, and educator who is Black/Filipinx and trans/non-binary. They moved to the Pacific Northwest 16 years ago and as they were separating from the US Navy, they got into the Seattle Slam Poetry Scene and have been a force to be reckoned with since. Ebo shares insight into their forthcoming book, Insubordinate, and speaks on the unrealistic expectations of poets from marginalized groups and classism in the arts community.

Bri (B): You’ve been part of the Seattle slam community for some time. How has it shaped your voice and writing?

Ebo (E): Because I don’t have an academic framework for poetry, I often wanna say stuff how it is, not coated in flowery language. That’s not to say that’s not a valuable skill. But I think that’s what has created my style. And because it’s meant to be spoken aloud. So I think there’s a different way of existing on page than there is on stage.

B: What’s the difference between writing and spoken word in terms of how the audience gets it? And do you have any concerns or intentions with your book, Insubordinate?

E: There’s definitely a difference in how the audience perceives it. There’s more of a chance for you to attach yourself or to take away what you want from the page. And with the stage, our tone of voice or our volume or lack thereof guides you more towards what I originally wanted you to believe.

With my book, I keep telling people that we are, to say the least, at a very interesting time in history, and I think my biggest fear is that white people are looking for an answer from us. And because white supremacy will have us believe there is one leader who will save us all, they’re now looking at Black and Brown folks, and specifically when we talk about intersections … I don’t want to be the “trans voice of them all.” I don’t want people to try to find an answer in my book. I want them to find my story, my personal story.

E: Sometimes, when I write about a tree, to an audience that wants to view me a certain way, it’s a “tree from the Black/Filipino trans whatever,” and I’m like “No … just talking about the tree.”

B: Unfortunately white cis-het writers have the privilege of being seen — you get to see their story no matter how boring. For us, there’s the extra layer of having to be representative of our people. Going off that, what are some of the big themes present in your new book?

E: As you know, the book is called Insubordinate. That was a title given to me last summer by someone, and something I learned from my young folks is that much like “diversity,” “subordinate” really depends on who’s talking. Wouldn’t you want me to be challenging authority? And that’s what I do in all of my identities, so what is it that you mean? It’s like when someone says “oh that crowd was so diverse!” And I go “really? Cus there was only one Black person …” The meaning depends on who’s speaking.

B: You mentioned your kids — the youths. Are you a teacher? What other jobs do you do?

E: I’m a teaching artist, mostly I teach at college age when I do speaking gigs and readings at colleges across the country. I am also a nonprofit worker, like a lot of us in Seattle are.

I’m hoping art is something I can just do, and survive capitalism doing it, which seems to be the toughest part.

B: How do you see the role of your art in this particular moment?

E: I think as artists, our job is to humanize history. If we were to read what is going on right now in a history book, it would just be very dry. “… And then they took over Capitol Hill.” And we as artists, we humanize the moment as someone experiencing history. That’s kind of how we make that moment live forever.

B: Just very well said. I can definitely tell you’re a poet!

E: Sometimes I use the flowery language just to be flamboyant, but most of the time I’m like “Let’s just say what it is.”

B: Yeah, I think there’s real power in making work and art that’s accessible for people. People give poetry a lot of [mess], and rightfully so, cus a lot of the time it’s so extra and hard to understand.

E: That turns off a lot of my young folks from poetry because the poetry you read in English class is not the poetry I’m gonna bring you. No poetry you’re gonna read in a high school book is on YouTube right now. Part of that is me, in a way, because I’m not an academic person. I don’t have a Bachelor’s degree. I’ve never even come close to being accepted as an academic, I feel. It’s always been important to me to be the person who’s gonna have this art form that people like me can understand and feel and think they can do it too. That’s what’s going to keep the humanization of history happening, is if we’re all trying to do it.

B: Do you think there’s gatekeeping of the arts by people who have MFAs? Have you experienced that kind of prejudice?

E: There’s a lot of folks with fancy letters behind their names who are trying their hardest to unlearn that behavior or bias, but what it comes down to is that same idea: that we want the answer from someone we believe has it. And if you went through all of this schooling, then you must know something! If you spent all this money and got this piece of paper, then you’re the expert, whereas this person who came up off the street doesn’t know.

B: That’s something we all have to pick away at: this idea that the people who have the access and sometimes by circumstance end up in institutions. They end up deciding what is “good art.”

E: Exactly! These are very rich, white people who are making the rules. Which is why I think spoken word and slam poetry has always been the stepchild of poetry in this way, like “that’s not real poetry.” Well, why? Tell me why. There’s a style. There’s specific ways in which it shows up. It’s actually because it came from PoC communities as a way of telling our stories verbally. And because it doesn’t fit into your system of validation, it’s trash.

B: Have you participated in any virtual readings? How is that different from in person engagement?

E: All of my gigs were cancelled with the stay-at-home order, and I really had to reflect on the fact that my entire job is based on live interaction. That’s not a thing anymore, so did I have to get a new job? Then everyone started realizing Instagram Live and the Zoom Rooms, so yes I’ve done a lot of that. I’ve enjoyed the company, but I think that live interaction, because I’m someone who picks up off vibe, there’s that one layer missing.

B: Yeah, especially something so intimate as writing and the energy of the crowd is really important. Anything going on around the city you wanna plug?

E: The actual book release party is something I’m really excited for and proud of because of the way the community has entangled itself in it. August 27 it’s gonna be a live limited-seating event, so people can properly social distance, as well as be online.

It’s gonna happen at Nurturing Roots Farm on Beacon Hill, with small bites from Chef Tariq from Feed the People. There’s gonna be a limited open bar by Damon from Brown Liquor. Also this event is in collaboration with someone I work with so often, Ben Yisrael, whose book is also coming out that same day — his book is A Gorgeous New Language.

I get to invite all of my people to be part of this thing I created. It’s almost like this big baby shower, right? I feel so excited for that live interaction with people, and I get to showcase how hard Black folks in Seattle work to be excellent. JusMoni is completely producing and designing the show. Something that is displayed too is her excellence and vision, which is not my thing at all. It just gets to be this community party where everyone gets together, and my baby gets to be there too.

Bri Little is a Seattle-based writer covering culture and the arts.