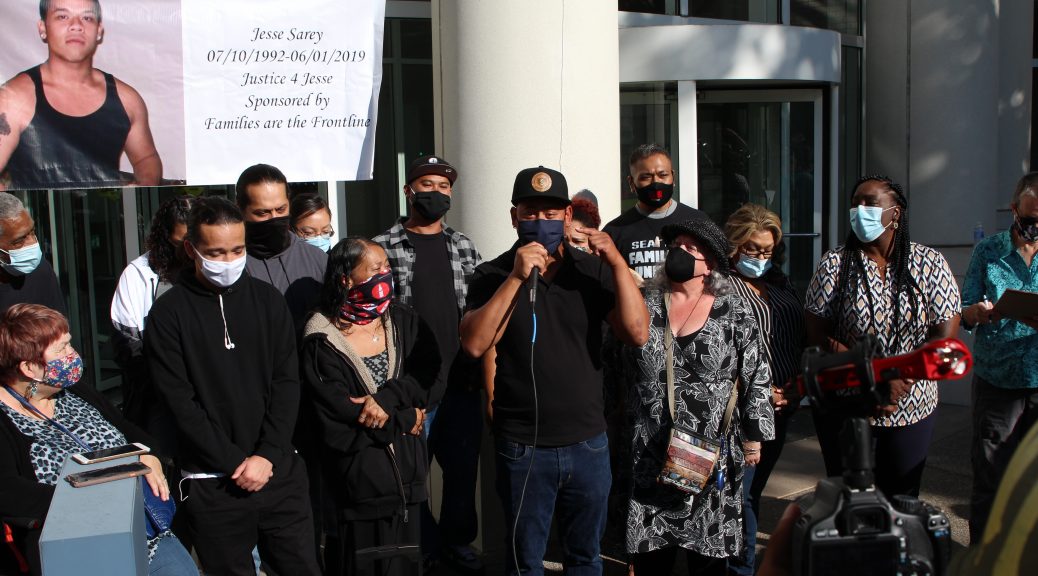 Jeff Nelson, the Auburn Police officer who shot 26-year-old Jesse Sarey in May 2019, was charged with second-degree murder and first-degree assault by King County Prosecutor Dan Satterberg on Thursday, August 20. Nelson was arrested on Monday morning at the Maleng Regional Justice Center and his bail was set at $500,000. If he posts bail, he will go into electronic home detention. Nelson pleaded not guilty to both charges.

The charges are the first against a Washington state police officer since Initiative 940 took effect in December 2019, changing the legal standard for criminally prosecuting police officers in instances of deadly force. The King County Prosecuting Attorney’s Office is no longer required by law to prove “malice” or “bad faith” on the part of the officer. The new legal standard focuses on whether the officer acted reasonably or in “good faith.” In other words, a jury must decide whether an objective, similarly-situated, and reasonable officer would believe that the use of deadly force was necessary to prevent death or serious injury to the officer or another individual.

“Today means that Jesse was not just an insignificant person and … it humanized him, and it gave hope to a lot of other families out there,” said Elaine Simons, Sarey’s foster mother. “To get an officer charged and arrested for second-degree murder and first-degree assault is telling our community and our nation that no police officer is above the law and that they’ve got to be held to the same standard as our community would be held.”

Using video analysis from independent investigators the Valley Investigation Team, attorneys at the county prosecuting office tied together key elements that led them to eventually file charges. Videos were obtained from neighboring businesses and audio was used from Nelson’s patrol vehicle dashboard camera, which was not angled in a way that captured any of the footage.

Near the entrance of the Sunshine Grocery at 1402 Auburn Way North, just after 6 p.m. on May 31, 2019, video shows Nelson exit his patrol car and verbally confront Sarey, telling Sarey that he is under arrest for disorderly conduct. Over the next six seconds, Nelson sought “to physically subdue” Sarey, leading to “a series of seven punches toward Mr. Sarey’s head and upper body.” Eventually, the video analysis notes that Nelson is seen pushing Sarey against a freezer box while drawing his weapon with his right hand. Nelson then “fires one shot into Mr. Sarey’s torso, clears a jammed round, and fires another shot into Mr. Sarey’s forehead 3.44 seconds later.” The analysis goes on to say that after sustaining a shot to the abdomen, Sarey is seen falling immediately to the ground and sliding backwards onto his arm and back before he’s shot a second time.

In total, 67 seconds elapsed between when Nelson initially confronted Sarey and when he fatally shot him.

“We’re hoping that this is the first of many [cases] that should be coming down the pike because Jesse wasn’t the first person [to be killed by police] after Initiative 940 was enacted, so I’m hoping to see some other officers be charged with murder in light of 940,” said Katrina Johnson, the cousin of Charleena Lyles who was killed by Seattle police in 2017. “I definitely believe that in the case of Manny Ellis, Shaun Fuhr, and other individuals within the community, that we should be seeing these prosecutors and we need to start to hold them accountable out here in Pierce County but also with other cases around King County.”

The prosecuting office asserts that both of the shots that Nelson fired “were unreasonable.” Each shot that was fired is being represented in a felony charge. The first shot, deemed the fatal one, resulted in the murder charge, while the second shot led to the assault charge. “Remarkably,” the prosecutors said, the King County Medical Examiner determined that the shot to Sarey’s forehead was not an immediate fatal shot.

Investigative experts concluded that “Nelson did not follow his training in a number of ways, and those failures needlessly provoked the circumstances that led to Mr. Sarey’s death.” They also said that Nelson “did not de-escalate the situation” and he “created the very situation that brought about his use of deadly force.”

It was also determined that Nelson “did not wait for the backup he had requested, which would have significantly reduced the chance that lethal force was necessary”; “had access to less-lethal options as he approached Mr. Sarey, including his K-9 and the Taser strapped to his thigh, which was never deployed”; and that “clear” evidence shows that Sarey did not have possession of a knife and that Nelson’s gun was fully in his possession, which led experts to conclude that Sarey “did not pose a threat of death or serious physical harm” to Nelson.

Nelson could face 123 to 220 months if convicted on both counts and 93 months to 123 months if only convicted of the assault charge. Nelson signed a no-contact order that prohibits any contact between him and Elaine Simons, any other members of the Sarey family, and any other witnesses to the case. Nelson also signed an order to surrender his firearms, which affects his concealed gun license, police force firearms, and any other personal firearms.

“I’m feeling overwhelmed. I’m excited that we get to see a glimpse of justice that many, many other families have not, not just here in Washington, but across the nation,” said Sonia Joseph, the mother of Giovonn Joseph-McDade, who was killed by Kent police in 2017. “I’m feeling hope that the system is actually being unbiased and working for the community and its people the way it should be.”

Nelson, who has worked for the Auburn Police Department since 2008, has been involved in more than 60 use-of-force incidents and has committed three of the five officer-involved shootings in the entire police department since 2011. Before shooting Sarey, Nelson shot and killed 48-year-old Brian Scaman in 2011 and 25-year-old Isaiah Obet in 2017. He shot all three in the head. In a settlement announced separately last Thursday, the city of Auburn agreed to pay $1.25 million to the family of Obet, even though the Auburn Police Department had recently defended Nelson’s actions in that case, for which he was awarded a Medal of Valor.

Nelson also has about three dozen instances of siccing a dog on suspects and about a dozen accounts of using neck restraints to hold suspects unconscious. In 2018 he broke an unarmed suspect’s ankles by driving into him with his patrol car and pinning him against a fence. In 2014, Nelson was recorded asking another officer, “Are you ready to (expletive) this guy up?” before using a Taser and chokehold on a jaywalker who had cursed at the two officers.

Nelson has been on paid administrative leave since the day he shot Sarey, receiving his full salary, which could be more than $90,000. Aside from leave, Nelson has never been disciplined by the Auburn Police Department or referred to the Washington State Criminal Justice Training Commission, which oversees officer certification.

“I had a lot of mixed emotions, to be honest,” said Amy Parker, a senior attorney for the King County Department of Public Defense who is representing the Obet family in their case. “Listening to the prosecutor make a statement which was supportive of a [personal recognizance] release for someone charged with murder brought tears to my eyes, honestly, because I’ve never seen them do that — ever. As a public defender, I know how flawed the system is and, you know, there are a lot of mixed emotions, but to see a police officer held accountable for this horrific pattern of violence and a horrific pattern of aggression toward the community, there is something that felt good about that.”

The Auburn Police Department was contacted for comment but did not respond in time for publication.

“We need to center this around all of us — this now cannot just be about Jesse,” said Simons. “Jesse’s case will go quiet for a while and when it gets action, get ready and be here because we’ll be here. But let’s start focusing on these other cases and let’s bring the spotlight on them.”

Other cases of police killings around King County that happened after I-940 took effect will have the same processes as the Sarey case, but cases that occurred before must be reviewed under the law prior to I-940. According to the county prosecuting office, no officers have been convicted of shootings between 2005 and 2014 because until I-940 the law required the proof of “evil intent,” a combination of malice and a lack of good faith which is “essentially an impossible standard to meet,” according to the county prosecuting office. Only a handful of police officers in Washington State history have been criminally charged for taking a life, but none have been convicted of murder.

Featured Image: A family member of Jesse Sarey speaks during an Aug 24 rally outside of the Maleng Regional Justice Center that coincided with Auburn police officer Jeff Nelson’s arraignment. (Photo by Jack Russillo)