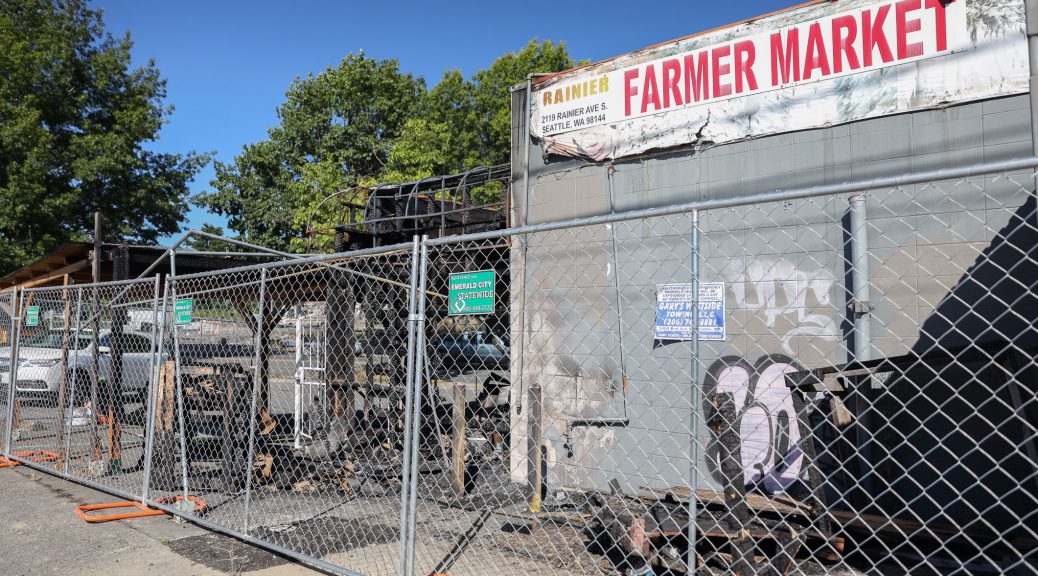 When Kevin Nguyen’s independent produce stand in South Seattle was set ablaze last week, his first reaction was to close up shop and leave the city. It was the fourth time in the past month that a fire was intentionally set on the property — part of a recent string of arsons around Rainier Avenue South — and Nguyen’s patience was wearing thin.

“Where do you go from here?” a KIRO 7 reporter asked him on Thursday, just hours after the latest fire finally reduced his Rainier Farmer Market building to rubble.

“Get the hell out of Seattle,” Nguyen replied.

With the benefit of a few days’ reflection, Nguyen is now rethinking that plan. An outpouring of community support in the aftermath of the arsons, he said, has been a reminder that there’s still an important role for him in the region.

“That’s one of the things that changed my mind,” he told the South Seattle Emerald in an interview on Tuesday. “Seeing the community support is overwhelming. … To see them support me, it’s like, OK, they do care, and they don’t want another big chain in here.”

In the week since Nguyen launched a GoFundMe campaign to help Rainier Farmer Market recover, neighbors have donated more than $28,000 of the fundraiser’s $80,000 goal. When the money started coming in, Nguyen admitted, “I was frickin’ surprised.”

“As soon as I posted it, the first person donated $250, and I don’t even know this person,” he said. “I see $500 and I think, oh my god, in this economy, in this pandemic that we have, somebody actually cares about small business.”

For the past five years, Nguyen, who grew up in South Seattle after his family moved to Columbia City in 1995, has owned and operated the Rainier Farmer Market on Rainier Avenue several blocks south of I-90. “There is a high demand in the area, and it’s really diverse,” Nguyen said. “There are people looking for certain things that you can’t find at QFC.”

It’s also an area that hasn’t had much access to healthy food historically, which has made neighbors and community organizers grateful for Nguyen’s work. Gavin Amos, community navigator for the Central Area Collaborative, said Nguyen’s unusual talent for sourcing high-quality produce has been a valuable asset for historically Black neighborhoods and communities of color.

“Kevin gets some of the best produce in the region,” Amos said. “He gets, like, designer fruits and vegetables. For folks in my community to have access to that, and not to have to pay an arm and a leg, I think that’s pretty significant.”

In recent years, however, running the stand has become harder amid burglaries and arsons that seem to have targeted Nguyen’s business. Last year he was the target of repeat burglaries, and the recent fires have left the building unusable. “There was a point last week, after the third fire, when I thought, ‘What would happen if I didn’t start this business?’” he said. “It’s a very mixed feeling.”

At that point last week, unable to sell produce from the store, Nguyen decided to liquidate his inventory. Working with Amos at the Central Area Collaborative, he sold what he could to local stores and other outlets, then gave the rest away with the help of Nurturing Roots, a community farming program. “I called everybody like, ‘Hey, I need to move this,’” Nguyen said. “‘Whatever you don’t want, I’ll just donate to you.’”

From there, “Nurturing Roots distributed Kevin’s produce to food deserts,” Amos said. Businesses and organizations in the Central Area, South Beacon Hill, and as far south as Federal Way “distributed all that produce in a matter of days to Black people.” Among the businesses were Sami’s Store, a corner store on 28th Avenue South and South Jackson Street, and coffee shop Cafe Avole, which Amos co-owns. Other local organizations, such as the Ethiopian Community Center, also helped distribute food.

Amos wants to see the program continue but said that can only happen with Nguyen’s help. “Even as we speak, we’re writing grants to give away fresh produce for the next four months. The only way we can do that is if Kevin doesn’t get the hell out of Seattle,” he laughed.

Buoyed by the community support, Nguyen now says he wants to see the Rainier Farmer Market reopen, but he’s still shaken from the attacks against him.

“Waking up every day since Friday, I don’t know what the hell I’m going to do,” he said. “Of course I want to go back because of all the support I get, but at the same time, it’s like, I have a standard. I’m not going to force it.” The Rainier Farmer Market lease ends at the end of the month, Nguyen said, and he still hasn’t renewed it.

The neighborhood has changed significantly in the past several years, Nguyen said, but he still sees it as home. And despite increasing competition from chain grocers like QFC and Safeway, he said there’s still a part of him that wants to buy the property the produce stand is on and make it his own.

Ben Adlin is a Seattle-based journalist