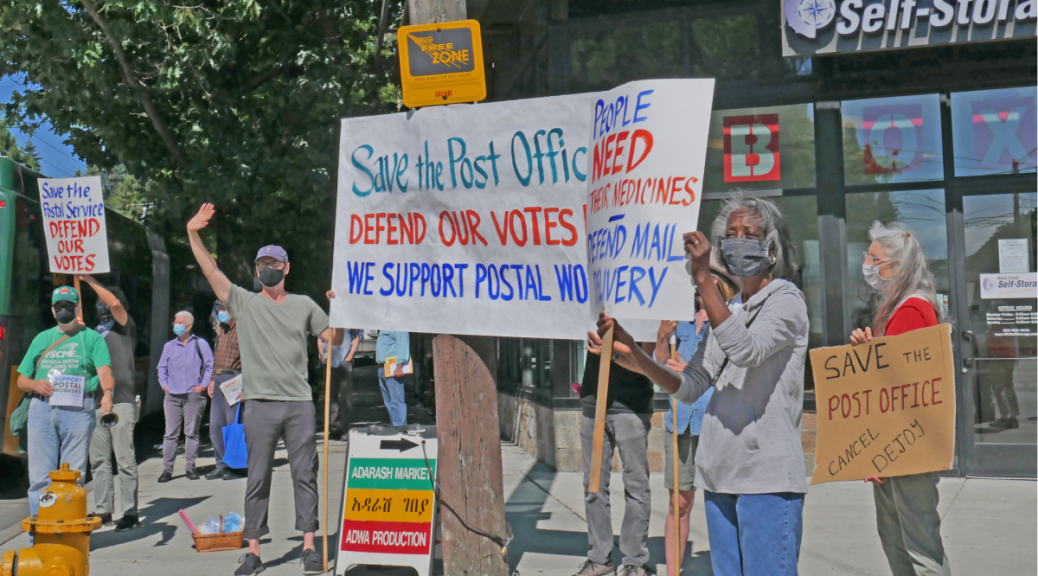 While a plan from the Trump-appointed Postmaster General Louis DeJoy to cut funding to the U.S. Postal Service and slow mail service has been put on hold until after the November election, local elected officials are still acting out of concern that ballots won’t be counted.

Attorney General Bob Ferguson is leading over a dozen states in a lawsuit alleging DeJoy’s changes could undermine the election, and Congresswoman Pramila Jayapal (D-Seattle) supported legislation to beef up the Postal Service, calling the service delays an attack on healthcare, democracy, workers, and small businesses.

“When a person votes by mail or any other way, it’s a love letter to democracy,” said Gov. Jay Inslee during an August 18 press conference announcing Ferguson’s lawsuit. “Trump has said he’s going to rob the bank of democracy.”

But as King County Elections prepares for over a million ballots to make their way into mail boxes and drop boxes in November, the agency is not raising the alarm yet — though it is preparing for extra-full ballot drop boxes, in case concerned voters forgo voting by mail.

“As of today, we believe that we will see regular delivery times for our outgoing ballots,” said Halei Watkins, spokesperson for King County Elections.

During the August primary elections, things went normally, Watkins said. “We saw nothing out of the ordinary both with our outgoing and with our returned ballots.”

This year, King County Elections is planning to pick up ballots from drop boxes more regularly, anticipating they will be used more fully. On election day, the highest-traffic drop boxes will be staffed all day and emptied multiple times a day. Additional staff will be ready to empty ballot boxes as soon as voters report that they’re full.

In an email to constituents, Jayapal urged people to call on elected officials to get more ballot drop boxes in place, to ensure all ballots are counted.

More ballot boxes is one plan Gov. Jay Inslee is considering to mitigate possible delays in ballots being received, he said during a press conference — another is a public awareness campaign so people know when they have to return their ballots.

King County Elections has no immediate plans to install more ballot boxes this year, Watkins said. The County installed its 70th box this year and has installed 60 over the past four years. It isn’t a simple procedure, she said: “We can only have as many drop boxes as we can secure and then staff appropriately.”

Ferguson’s lawsuit is against the Postmaster General, the Postal Service, and the president, and, Ferguson said in the August 18 press conference, “this administration’s assault on an institution that millions of Americans depend upon in their daily lives.”

It alleges that the Postal Service did not follow federal law requiring it to underdo a public process with the Postal Regulatory Commission before making changes to service.

The suit was filed after it became clear to Ferguson and Gov. Inslee that the Postal Service delays could have impacts on the November election, as well as on people receiving social security, other benefits, and medications. Ferguson’s office heard from veterans scared that they might not get their medications on time. Half of the veterans who get their prescriptions from the VA get them through the mail, Ferguson noted.

As KUOW reported, 40% of letter-sorting machines in the Seattle-Tacoma area had been disconnected before August 18. After the Postal Service called for a stop to this, workers in Tacoma and Wenatchee have been trying to reinstall letter-sorting machines that had been disconnected. In other parts of the country, it has been reported that critical parts for the machines are missing; so far, no news on that in Tacoma.

During questioning by the House Oversight Committee on Monday, DeJoy doubled down on his decision to not restore disconnected letter-sorting machines.

“We continue to be assured that ballots and voting materials are prioritized by the USPS and that they will work as hard as ever to get ballots out to voters and back to us just as they normally do,” she said.

DeJoy’s announcement that he would postpone the service changes came about 15 minutes after Ferguson’s lawsuit was announced — an initial small victory, the Attorney General said.

“They got caught with their hand in the cookie jar, but we gotta make sure that gets glued shut by a judge,” Inslee said.

The American Postal Workers Union is still concerned about service changes after the election, and is demanding a permanent reversal to the service cuts, restored staffing, and $25 billion in emergency COVID relief for the Postal Service.

Representative Jayapal voted for the Delivering for America Act, which passed the House on August 22 and which provides this $25 billion in emergency funding, restores Postal Service operations, prevents hours from being reduced, prevents the removal of mail boxes and mail sorting machines, and the closure of USPS facilities, as well as requiring all election mail to be treated as First-Class, meaning it is given priority over some other types of mail (second-class mail, for instance, includes newspapers and magazines and third-class includes advertisements).

During an emergency Congressional Progressive Caucus hearing Jayapal chaired on August 20, the Congresswoman questioned previous USPS Inspector General David C. Williams — who resigned upon DeJoy’s takeover of the Postal Service in April. Williams testified that there was no background investigation done of DeJoy before he was selected, despite potential financial conflicts of interest.

DeJoy has 30 million in stock in a post office contractor XBO, and stock in Postal Service competitors Amazon and UPS, according to Jayapal, giving him a financial interest in the Postal Service shrinking and private services growing.

Chetanya Robinson is a Seattle-based reporter.