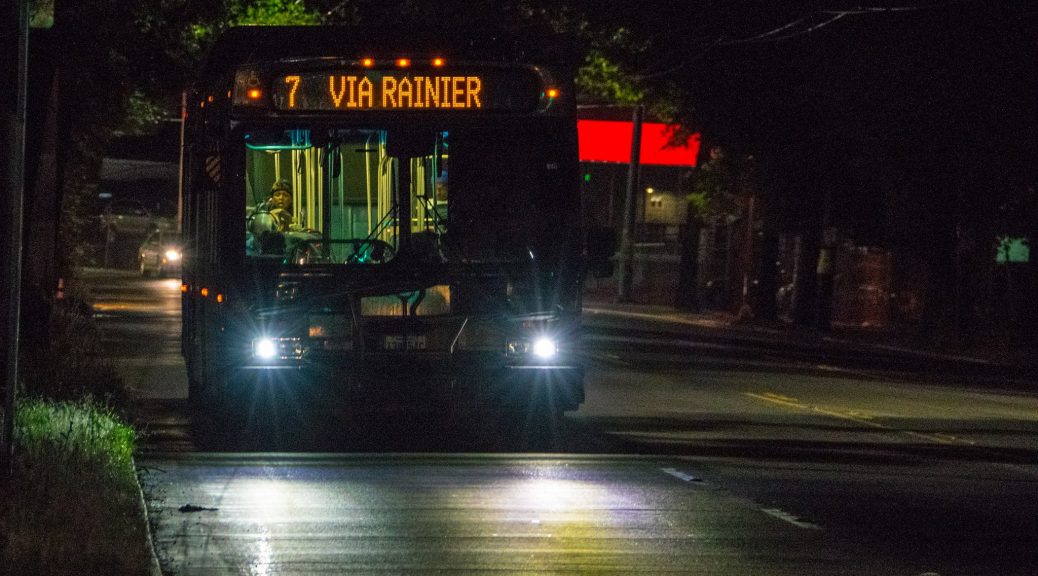 When you hop on a Metro bus, do you ever wonder about the life of your bus driver? Well, Metro driver Nathan Vass has thought about his passengers — and what’s more, he has written about many of them.

Vass is a man of many skills: a filmmaker, photographer, and writer, in addition to being a bus driver with a mastery of de-escalation. Most recently, in 2018, he curated a selection of his own blog writings about his Metro adventures and published a book collection titled The Lines That Make Us: Stories from Nathan’s Bus.

With an initial interest in filmmaking, Vass came to blog-writing indirectly after an encouraging conversation at a 2012 photography event at Theo Chocolate. “Whatever medium best suits the material is the one I use,” he said. “I can’t film or photograph people on the bus, hence writing about them.”

Much earlier, when he was applying to go to college, he was drawn to the University of Washington even though the school didn’t offer his desired major of filmmaking. “Photography was the closest thing they offered, and I couldn’t be happier I chose it,” Vass said. “Film photography taught me discipline and the art of seeing. I didn’t know those were what I needed for my life and art career, but I’m glad my intuition led me that way.”

His interest in public transportation also began at a young age. “Bus driving was a childhood dream,” he said. “I realize that’s a silly sentence, but it’s true!”

Vass’s fascination with buses was based on his comprehensive view of their importance. “I always found them hugely exciting and was especially taken with the intricate vastness of a network created as a gift for everyone to use no matter their background, elemental, inclusive, without a profit motive,” he said. “I couldn’t wait to try it and applied the day I turned 21.”

But life took a detour, and Vass ended up preparing for his Metro career for many years. “I worked for six years at Redmond Library and one year at Capitol Records in Hollywood,” he said. “Driving for Metro is like those two mixed together, with steroids added! You have the intensely democratic and egalitarian public space, like libraries, coupled with the high-energy focus of multitudes of short conversations and small talk, which is what my job as a mailroom clerk at Capitol entailed.”

Once he began his dream driving career, Vass began to process his daily experiences through the written word. “Writing the stories helps clarify my thoughts on both the events in the stories and broader themes that preoccupy in my personal life,” he said. “If you read between the lines, you’ll see what the stories are really about, me processing and reflecting on any number of subjects, often grief, loss, death, injustice, mortality, and how we move on despite them.”

Writing and publishing his blog posts has helped Vass maintain self-awareness. “So much of this job is my own preconceptions looking back at me,” he said. “I have to remember to choose how I look out in a healthy and positive way.”

With publication comes readers, and Vass reports that reader feedback has generally been positive. “One of my favorite passengers, King Travis, came upon a story I wrote about him in The Urbanist, and he was thrilled about it and shared it with his friends,” Vass said. “I was so thankful.”

So appreciated are Vass’s writing and charisma that he reports that passengers regularly wait at the bus stop until he drives up, sometimes bypassing opportunities to take an earlier bus with another driver. “I’m so moved they set aside such time,” he said. “It’s quite a gesture when you think about it.”

Vass tries to nurture this virtuous cycle. “I can’t imagine my company is actually worth waiting around for me to actually show up when there are so many other buses, but I try to give out the good vibes as best I can,” he said. “Positive energy has an interesting way of building on itself.”

This often brings people from the real-world bus to Vass’s virtual-world website, where he shares not only his blog but also his photography and information about his films. “One problem with multidisciplinary careers is the question of whether your audience will follow you from one medium to the next,” he said. “I’m enormously, endlessly grateful that people are interested in what I have to offer no matter what the medium is.”

This has been good news for Vass’s book. “I’m so happy books are more popular than blogs,” he said. “All those years at the library and a lifelong appreciation of books, along with being born in the ‘80s and growing up without the internet, make me value books more than online content.”

That’s not to negate the importance of the blog. “No book version will ever do justice to the 1200 stories of intertwining themes and recurring characters and documentation of gradual change of neighborhoods and individual lives that the blog is,” Vass said.

But The Lines That Make Us offers more than history; it offers healing. “The underlying theme linking the stories and motivating their sequence is the search for understanding in the face of grief, especially grief at the existence of death, and finding some sort of catharsis here in the real world,” Vass said. “I wanted it to feel truthful and rich with color and joy, able to look at challenges while also celebrating the beautiful moments I have with strangers every day.”

Despite this resonance, Vass has been surprised at the book’s popularity during the past two years. “It is taught at Seattle University as a textbook, got a Washington State Book award, is the Summer Reading book for Microsoft and the City of Redmond, and was a bestseller at Elliott Bay [Book Company] for two years straight!”

All this fame hasn’t distracted Vass from keeping his eyes on the road. “Seven years ago, a high-school passenger, Jermain, once asked me where I wanted to be in five years,” Vass recalled. “I said I wanted to be doing exactly what I’m doing now but on a larger scale. That’s precisely what’s happened, and I couldn’t be happier.”

Although writing entails a look backward, driving requires a focus on the immediate moment. “I believe you have to be experiencing the fullness of your goal right here and now,” Vass said, “in the mundane act of artmaking and living every incomplete day.”

Roxanne Ray is a Seattle-based writer.