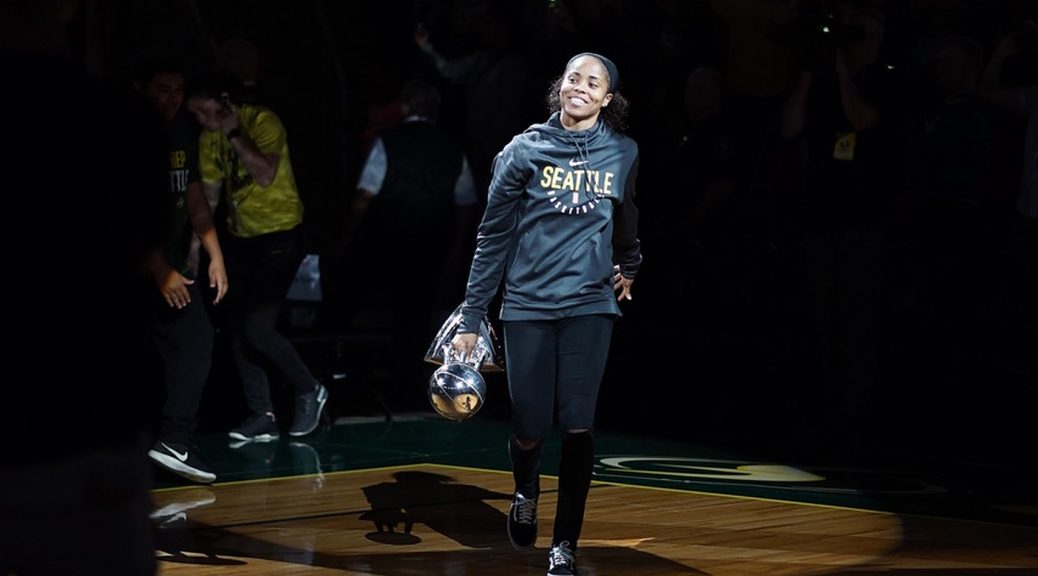 The world of sports came to a standstill this week when the Milwaukee Bucks announced they would not be playing their NBA playoff games on Wednesday or Thursday to protest the police shooting of Jacob Blake in Kenosha, Wisconsin on August 23. Soon, all the NBA teams scheduled to play had joined the strike. Several Major League Baseball teams also opted not to play, including the Seattle Mariners, the team with the most Black players in the league. Five Major League Soccer matches and two National Hockey League games were also postponed after pressure from players.

Unless you were watching ESPN2, however, you might have missed one of the more powerful images of Wednesday evening — when all of the players, coaches, and staff of the four WNBA teams scheduled to play instead took the floor arm in arm and knelt in front of the TV cameras. The Washington Mystics wore white T-shirts that spelled out Jacob Blake’s name on the front and featured seven red marks on the back, representing the seven times Blake was shot by police. Later in the evening, the entire league participated in a candlelight vigil, taking turns speaking about racial injustice and their place in the current movement.

But while the NBA may have shocked some with their strong stance, this action is not at all surprising coming from the WNBA. Since this condensed season began one month ago, every WNBA player has been wearing a jersey with the same name highlighted in black on the back underneath their own: Breonna Taylor.

In late July, WNBA players participated in a conference call. You’d think it would have been about last minute safety protocols during this very strange COVID-19 season played inside an isolation zone, or bubble, in Bradenton, Florida (now known to WNBA players and fans as the “wubble”). Instead, the league listened to a lecture of sorts from Stacey Abrams, the voting rights activist and politician in Georgia, and Kimberlé Crenshaw, the scholar and activist known for developing the theory of intersectionality. These women athletes were preparing for a season unlike any other.

The league had a number of considerations this year, noted Bethany Donaphin, WNBA’s head of league operations, during a press conference on July 30. “We thought about how to operationally execute a season in the midst of the COVID-19 pandemic,” Donaphin said. “We also had to stop and say we’re battling two global crises right now and the other is systemic racism.”

For these athletes, she added, issues of social and racial injustice are deeply personal. “There is no other league that has the intersectionality that we have … with 80% Black women and also many who identify as LGBTQ.”

So, even before the short season started, there were plenty of WNBA stars taking a stand. You may have seen Seattle Storm players Breanna Stewart and Jewell Loyd at Seattle Black Lives Matter protests and rallies in June. Soon, WNBA players league-wide committed their season to raising awareness of police violence against Black and Brown women. The league officially partnered with #SayHerName, an African American Policy Forum campaign, for the entire season.

Sydney Colson, a guard for the Chicago Sky, said at the July 30 press conference that the players went into this season knowing it would be bigger than their sport. “It isn’t far-reaching for one of us to be Breonna Taylor, you know? I think that’s the frightening thing. The thing that made this season so much bigger than just basketball,” Colson said. “Every day is not guaranteed, racial injustice is still a huge issue, we are not in a post-racial society.”

They’ve stuck to their word. WNBA players have dedicated press conferences after games to issues of police violence and, in particular, to honoring Black and Brown women killed by police. They’ve spent time educating themselves about police brutality, racial disparities, and voting rights, as well as how best to harness their public platforms for change, through plenty of calls and talks with women like Abrams and Crenshaw as well as Michelle Obama and Valerie Jarrett.

Before the tipoff of the season opener, when the Seattle Storm played the New York Liberty on July 25, the players warmed up in black shirts that read “Black Lives Matter” on the front and “Say Her Name” on the back. When the national anthem played, no one knelt. Instead, the players left the court altogether. “Kneeling doesn’t even feel like enough to protest,” Layshia Clarendon of the New York Liberty told ESPN at the time. “I don’t want to hear the anthem, I don’t want to stand out there. I don’t want to be anywhere near it, because it’s ridiculous that justice and freedom are just not offered to everybody equally.”

Then, moments before the game was due to start, Clarendon took a mic on the floor. “We are dedicating this season to Breonna Taylor, an outstanding EMT who was murdered over 130 days ago in her home,” she said. The Storm’s Breanna Stewart then led the teams in a 26-second moment of recognition of Breonna Taylor’s life, cut short at 26 years old when she was killed by police officers who entered her Louisville, Kentucky, home with a no-knock warrant in the middle of the night on March 13.

This commitment to social justice is real for the WNBA —professionally as well as personally. These women are used to having to fight for their own right to exist in a pro-athlete world that constantly tells them they aren’t as important as their male counterparts. When the WNBA players’ association signed a new collective bargaining agreement this year, they got a raise; players now earn an average of $130,000. That’s still less than 2% of the average NBA salary. WNBA players receive a fraction of the marketing budgets and have had to fight for better TV deals. Many play grinding yearlong schedules, padding their WNBA seasons with higher paying work in Europe and Asia during the offseason.

When women athletes put their jobs on the line to go on strike or walk off the court in the name of racial justice, they’re risking a whole lot more than the men do. These players, for the most part, don’t have millions in the bank to pad their fall or even the guarantee their league will still be around for years to come, like many male professional athletes do. That’s why the fact that they have always led the charge on speaking out for social justice is even more admirable.

Still, like many Black women who have led the way in activism, their work is often forgotten. On July 9, 2016, one week before Colin Kaepernick first famously sat out during the National Anthem (he later began to kneel), four Minnesota Lynx players — Maya Moore, Seimone Augustus, Lindsay Whalen, and Rebekkah Brunson — showed up to a game wearing black T-shirts that read: “Change Starts with Us: Justice & Accountability.” They used the pre-game press conference to discuss police violence, including the recent killings of Philando Castile in Minneapolis and Alton Sterling in Baton Rouge, Louisiana. Four Minneapolis police officers left their security posts at the Lynx game that night in protest of the players’ actions.

In New York, on July 10, 2016, several members of the Liberty wore black shirts with white letters reading #BlackLivesMatter. Later that week, the WNBA fined all the teams who wore black T-shirts or anything that was not league-provided for violating the league’s uniform policy. Players on many teams got involved, including the Seattle Storm, wearing plain black T-shirts to warm up and spreading the word to social media.

Within weeks, the league changed its tune, rescinding fines and giving support to their players for speaking out. This year’s Black Lives Matter/Say Her Name warmup shirts are WNBA-provided.

The men may have gotten most of the press this week, as they get most of the paychecks and most of the eyeballs on their sport. But these women aren’t done using the platforms they have to push their message. On Wednesday night, while discussing the financial implications of not playing, WNBA Players Association President Nneka Ogwumike said the women were continuing their commitment. “The sacrifice that we are making is in a lot of ways, monetarily, more for us” than it is for the male players, she told ESPN. “But I think that still speaks to the metaphor of what we dedicated this season to — Say Her Name — and how women are often forgotten.”

Maggie Mertens is a Seattle-based writer who covers the intersection of gender, sport, and culture. Her work has appeared in The Atlantic, espnW, Glamour, VICE, and other publications.