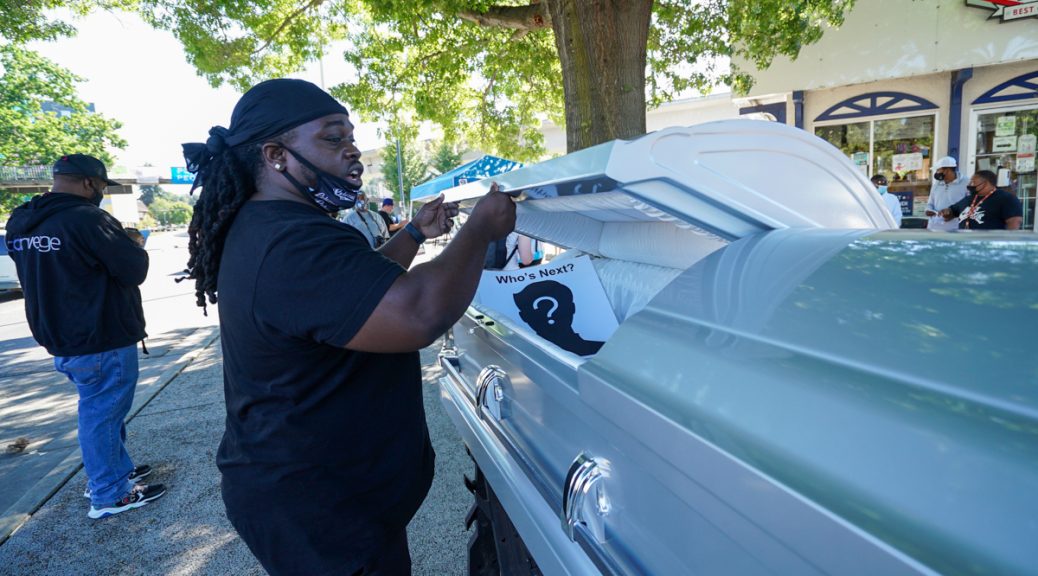 During the height of rush hour on Friday afternoon, four Black men carried a casket into the intersection of Rainier Avenue and Martin Luther King Boulevard and placed it on an awaiting table. A loudspeaker on the corner blasted Boyz II Men’s “It’s So Hard to Say Goodbye to Yesterday” passing drivers glanced, a few of whom honked in support or to express their condolences. The pall bearers, joined by a woman in a black veil, paused in front of the casket as volunteers with cars, bikes and trash cans blocked the intersection for a moment of reflection. Then the group picked up the coffin again and returned it to a pair of sawhorses set up in front of The Original Philly’s, where a group of fifty-or-so stood watching.

Aside from a laminated sheet of paper reading, ‘who’s next?’, the casket was empty. The gathering wasn’t a funeral, though its organizers — a group called the Regional Approach Method (RAM) Collective —  intended that it resemble one: even the leaflets that organizers handed to attendees were designed in the style of a funeral service schedule, with white rose decals on almost every page.

Instead, the Who’s Next: We Want to Live event was a call to action. RAM, comprised of leadership from an array of local alternative justice and violence prevention programs, held the mock funeral to demand that city and county officials address the rising tide of gun violence — which host Willard Jimerson Jr. of King County’s Zero Youth Detention program described as an “epidemic” — with the same urgency they have shown the COVID-19 epidemic.

In one of several speeches by Black community leaders, Choose 180 Executive Director Sean Goode reminded the audience of the King County Board of Health’s June declaration that racism, including the gun violence that precipitates from it, constitutes a public health crisis. “Now it’s our time to hold them accountable,” said Goode. “We’re in the midst of two pandemics, and we’re only investing in [solutions to] one of them,” added Jimerson. All the speakers hammered home one key reason for the city’s apparent lack of attention to gun violence: most of the victims of homicides in the county this year are Black or Brown.

The casket was a symbolic gesture, but several speakers remarked on how bitter a sight it was. Dominic Davis, RAM member and CEO of Community Passageways, gestured to passing cars as he commented, “it’s a damn shame that Black and Brown people have to get a casket and sit it on the corner so that a bunch of people who are here gentrifying our community get to drive by and see us begging for some money.” But Davis, like all of the afternoon’s speakers, says he can’t stomach another shooting. “Every day when I wake up, I’m scared to look at my phone because I don’t know what I’m going to see,” he said. “I’ve been to more funerals than birthday parties.”

According to Jimerson, local leaders formed RAM to “coalesce” experts on harm reduction and violence prevention. He said that in the past, the city has expected anti-violence organizations receiving city funding to operate “in silos,” explaining that “there might be [city or county] funding given to various organizations to do community work, and then all of the sudden we take on the issue like we are solely responsible for bringing a solution to a problem that’s facing all of us. That’s unfair to any organization or person.” Instead, Jimerson and his fellow speakers emphasized the importance of pooling knowledge, resources and connections for the shared goal of public safety without policing.

RAM’s call for local elected leadership to address the crisis of gun violence in Seattle and King County comes as the region is witnessing a growing spike in shooting incidents and homicides. According to King County Prosecutor Dan Satterberg, 44% more gun homicides occurred between January-June of this year than in 2019. In Seattle itself, shots-fired 911 calls are up across the city (rising more than 200% between May and August in North Seattle and 55% in South Seattle during the same period), and the city has already seen more homicides this year than in the entirety of 2019, when the city experienced 28 homicides. This week alone brought two more apparent homicides and one non-fatal shooting, the last of which injured a 17-year-old on Thursday night in the Central District.

Davis and others also took the opportunity to call out Seattle Mayor Jenny Durkan for her recent veto of the city council’s revised budget proposal that would have, among other things, allocated $17 million (obtained through so-called ‘interfund loans’) to community-led alternatives to policing and BIPOC community-based research on public safety. Of that $17 million total, the council had earmarked $4 million to support new violence prevention initiatives.

Davis’ organization, which currently has three contracts with the city to run youth diversion, counseling, and critical incident response services, was one of four organizations that had hoped to lead those initiatives. Specifically, Community Passageways, along with the South Seattle-based Urban Family Center, Safe Passages, and Alive and Free, had approached the city council earlier this year with a proposal for three violence prevention hubs located in South Seattle, the Central District, and West Seattle.

According to Davis, his organization envisions those hubs being staffed by social workers and respected elder (former) gang leaders who would provide counseling, mentorship and de-escalation for the neighborhoods’ young people; the three hubs would serve as pilots for a program he envisions spreading city-wide and eventually providing food or rent assistance to those in need. But in light of the mayor’s veto, Davis is not confident that such a program will become reality. “Everyone keeps saying that [gun violence] is ‘a shame,’” he said. “They say, ‘here’s a million dollars to do this and that. That’s pennies.” As he sees it, truly effective violence prevention programs will require funding on a much larger scale.

Goode, whose organization did not present the city council with a program proposal this summer, likewise turned his attention to the mayor’s veto, albeit to address its symbolic power. “When the city council suggested that we could begin making some minor changes and the system [the executive] begins to push back against those small, inconsequential changes,” Goode said, “we understand that it’s not about money at all. It’s about an ideology we abandoned ourselves to — [the idea] that we need someone else to keep us safe because we can’t trust each other.” Goode also indirectly repeated the now-frequent call for the city’s public safety budget to be determined through a participatory budgeting process, remarking that public dollars “do not belong to an agency… The elected are the stewards of our cash, so let’s continue to tell them what we want them to do with dollars that belong to us.” In a conversation after his speech, Goode said that Choose 180 would only pursue a larger city grant if a community participatory budgeting process revealed broad public support for their programming. (The organization currently has a $178,500 contract to provide various forms of outreach, support and mentorship to youth).

Several survivors of gun violence also spoke at the event. One, a local anti-violence worker and survivor named Warlina Wheeler, addressed the impact of the size of Seattle’s Black community on her violence prevention efforts. On one hand, she said, “we’re blessed to have such a small community in which we know each other.” On the other hand, she added, “there are kids killing each other whose parents we grew up with. How do I address the people who were killed by the kid of someone I know?”

But all the afternoon’s speakers made clear their belief that true public safety lays in a healthy and tight-knit community, as well as in programming that repairs and cares for those who might commit or have committed acts of violence themselves. “A gunshot that [comes] from a young person is the most [intense] cry for help,” said Jimerson. “It’s the most exaggerated way to say, ‘look at me — I need your help. I’ve been needing it for quite some time.’ The gunshot is a reflection of a lack of support.”

And without that support, the afternoon’s speakers can’t imagine Seattle or King County finally stemming the tide of violence. “If we don’t keep investing in quality solutions,” said Jimerson, “then we can only look at [this casket] and wonder who is next.”

Featured image Willard Jimerson Jr closes an empty casket set up in front of The Original Philly’s during the Who’s Next: We Want to Live event. (Photo by Susan Fried)