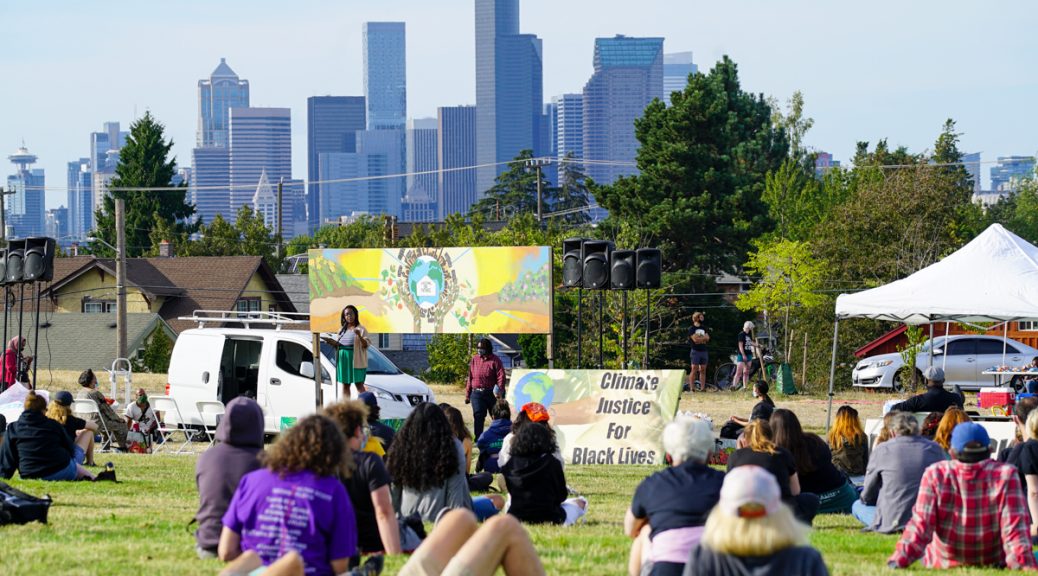 Over the course of two hours on Saturday afternoon, some 200 people trickled onto a sunny field in Jefferson Park on Beacon Hill to join a rally and march held by the newly formed Climate Justice for Black Lives collective. After a brief blessing by an Indigenous LGBTQIA+ drum group, emcee B.M. Williams explained that the gathering was “about celebrating our resilience as Black people, Indigenous people and People of Color” while calling attention to the dire and worsening impacts of climate change on BIPOC communities locally and nationwide.

According to one of the afternoon’s co-organizers, Angelica Yehdego, Climate Justice for Black Lives emerged “organically” from conversations among a small group of local activists — some experienced, some affiliated with older groups, and some new to the scene — about “centering the intersection between the Black Lives Matter movement and climate justice.” Saturday’s gathering was the collective’s first-ever public event; as such, the event seemed to be as much about community-building as it was about consciousness-raising.

The list of speakers who climbed onto the brightly painted stage ranged from new high school graduates to movement veterans, and the topics they raised were equally as varied. The crowd heard brief speeches on the intersections of housing discrimination and climate justice; on the incarcerated firefighters battling wildfires in California; on past and ongoing battles against fossil fuel infrastructure in the Northwest; and on the value of self-care in times of crisis. At the center of all the speeches, however, was one core demand that was most succinctly articulated by Got Green organizer James Williams: “We have to get from where we are to where we need to be while repairing the harm that’s been heaped on communities of color for all too long.”

In light of the 15th anniversary of Hurricane Katrina, the psychological damage done by that storm became a recurring thread in the afternoon’s speeches. Katrina was especially personal for two of the afternoon’s speakers: Seattle University Professor Gary Kinte Perry recalled receiving phone calls from his family in New Orleans about the incoming storm just days after he moved to Seattle in 2005, and local fossil fuel infrastructure researcher and Black Collective Voice leader Tarika Powell explained that her experience as a Katrina evacuee helped awaken her passion for climate justice. Both cast Katrina as a case study in the disproportionate impacts of climate disasters on BIPOC communities — a point also highlighted by the event’s emcee who brought up the destruction wrought by Hurricane Laura in Louisiana and Texas earlier this week.

Powell also drew a parallel between the climate justice struggles on the Gulf Coast and those in the Northwest. “Because we are in close proximity to energy-hungry ports overseas, the fossil fuel industry has tried to give the Northwest what I call a ‘Gulf Coast makeover,’” she said. “We’ve had to fight off dozens of oil-by-rail projects, coal projects, and fracked gas proposals.” Powell says that like climate justice battles on the Gulf Coast, fights against fossil fuel infrastructure in the Northwest have heavily relied on BIPOC leadership and, in the case of the Northwest, particularly on Indigenous leadership. “We’ve had to lean on Indigenous communities to take risks, to put their rights on the line to help fight these projects off,” she explained. In a conversation after her speech, Powell pointed to two ongoing local battles — one against a planned methanol plant on the Columbia river in Kalama, Washington and another against a liquefied natural gas facility in Tacoma — as contemporary examples; the latter of the two controversial projects is located on Puyallup tribal land.

Though the Climate Justice for Black Lives collective is still nascent, the rally made clear the group’s connections to an array of well-established local climate and racial justice organizations. Got Green, for instance, began as a sustainable workforce development program during President Barack Obama’s first term; after transforming into a community organizing group, the group helped lead a push for a 2015 city ordinance requiring the city to prioritize hiring construction workers from disadvantaged areas of Seattle and King County. The group is also responsible for Seattle’s Fresh Bucks program, which provides vouchers for low-income city residents to buy produce at local farmers markets and some grocery stores.

Got Green is the successor to the Community Coalition for Environmental Justice (CCEJ), a BIPOC-led group founded in 1995 that was also well represented at the rally. According to former CCEJ organizer Matt Remle (Lakota name: Wakíƞyaƞ Waánataƞ), the event’s organizers chose Jefferson Park in honor of a successful CCEJ campaign in the late 1990s to shut down a medical waste incinerator at the Veterans Administration hospital adjacent to the park. Both Remle and one of CCEJ’s founders — known to most as Ms. Dove — spoke that afternoon.

The rally concluded with a brief march to and from the Beacon Hill light rail station, drawing a few neighbors onto their porches and stoops to wave. As the small crowd dispersed, the event’s organizers asked those remaining to join them the following day at a memorial marking the anniversary of the killing of John T. Williams, an Indigenous woodcarver, by Seattle Police in 2010. The Climate Justice for Black Lives collective has not yet announced any additional events of their own.