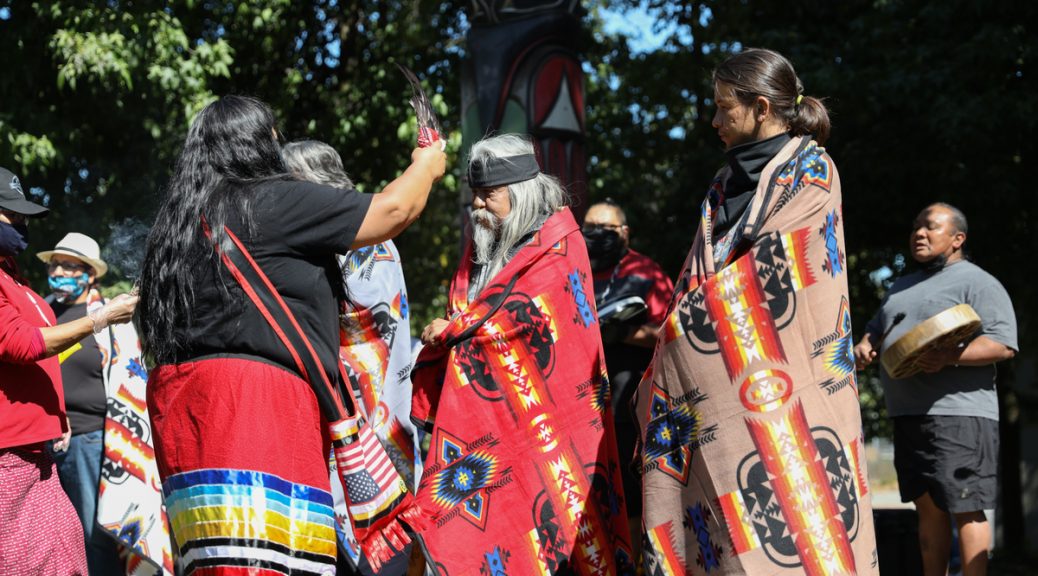 Next to the Space Needle and below a 34-foot-tall totem pole, a crowd of a few hundred people set their phone timers to ring at 4:12 p.m. yesterday, Aug. 30, as a reminder to observe a moment of silence at the exact time and date that a Seattle Police officer fatally shot John T. Williams, a celebrated Native American wood carver, 10 years ago.

In 2012, on what would have been John’s 52nd birthday, John’s brother Rick Williams, with the help of other family members and craftsmen, erected the totem pole they had carved and which stands near the Space Needle today. At the vigil on Sunday, Rick Williams spoke about the memorial space and about memories of his brother.

“I’ve been here every year for 10 years to honor [John],” Rick Williams said. “The best thing I can say about my brother, he was the best carving partner I’ve ever had.”

The day John T. Williams was shot and killed on Aug. 30, 2010, he held his woodcarving essentials: a piece of cedar and a wood carving blade. John walked across a crosswalk near the corner of Boren Avenue and Howell Street, when Seattle Police officer Ian Birk got out of his squad car, drew his gun, and shouted at John to drop his knife. Williams was hearing impaired, and when he didn’t respond, the officer shot him five times.

Witnesses unanimously testified that John T. Williams, who was a seventh-generation Nitinaht carver of the Nuu-chah-nulth First Nations, had posed no threat to Birk. A majority of jurors found that Williams was not given time to drop his knife before he was shot, and in 2011 the Seattle Police Department Firearms Review Board ruled that the shooting was unjustified.

However, Birk ultimately resigned before he could be fired — and due to state law, which stated an officer couldn’t be charged unless there was proof of evil intent —  Birk never faced charges.

In response to this and other incidents of excessive use of force, the Seattle Police Department was put under a federal consent decree, which currently still stands, following an investigation by the U.S. Department of Justice. Washington State voters also passed Initiative 940 in order to make it easier to prosecute officers like Birk for instances of police brutality and excessive use of force.

One of the organizers of the march, Jay Westwind Wolf Hollingsworth, has been working toward the police reform for the past ten years in response to John’s murder, and is currently serving on a new task force created by Gov. Jay Inslee in response to the George Floyd protests over this past summer.

Hollingsworth spoke to the progress of the initiative but also about the shortcomings of I-940, especially regarding how police respond to individuals with mental illnesses and the need for independent investigations into police brutality.

In addition to a ceremony held earlier in the day to honor family members who lost loved ones to police brutality, many individuals spoke at the vigil, including John T. Williams’ nephew and Rick Williams’ son, Eagleson Williams.

Eagleson, who has continued the tradition of carving, expressed grief at the loss of his uncle,  spoke about vigils in the past, and expressed gratitude to those who were present on Sunday.

“Police should be accountable for what they did wrong. They shot and murdered a seventh-generation wood carver that’d been here a lot longer than most families,” Eagleson said. “The last few years I noticed people never showed. People never came out or cared and it breaks my heart wondering: why am I here? Why am I still carving around? Why am I out doing this art everyday? ‘Cause all you guys, everyone here enjoys it.”

At 5 p.m. Eagleson led a march away from the memorial totem pole and toward the intersection of Boren and Howell, where John T. Williams was shot and killed in 2010. In addition to drumming and singing, the march included chants of, “Whose lives matter? Black and Indegenous!” and, “No justice! No peace! No racist police!” among many others.

While the vigil and march strongly emphasized peaceful protest, and both were peaceful throughout, a SWAT car was staged north of the vigil at the Space Needle earlier in the day, and a few Seattle Police Department (SPD) vehicles and at least one SPD officer on a bicycle were visible as the group marched to Boren and Howell.

A little after 6 p.m., the group arrived at the intersection of Boren and Howell, where both Rick and Eagleson gave speeches.

“I live with this everyday, what happened to John, and I have no clue how to get this out of my head or my heart,” Rick said, later addressing the young protesters. “As an elder, I see this generation will change [the police], it will make it go back to the way it was, where you won’t have to think, ‘Do I call 911?’”

Elizabeth Turnbull is a Seattle-based reporter.

All images by Alex Garland.