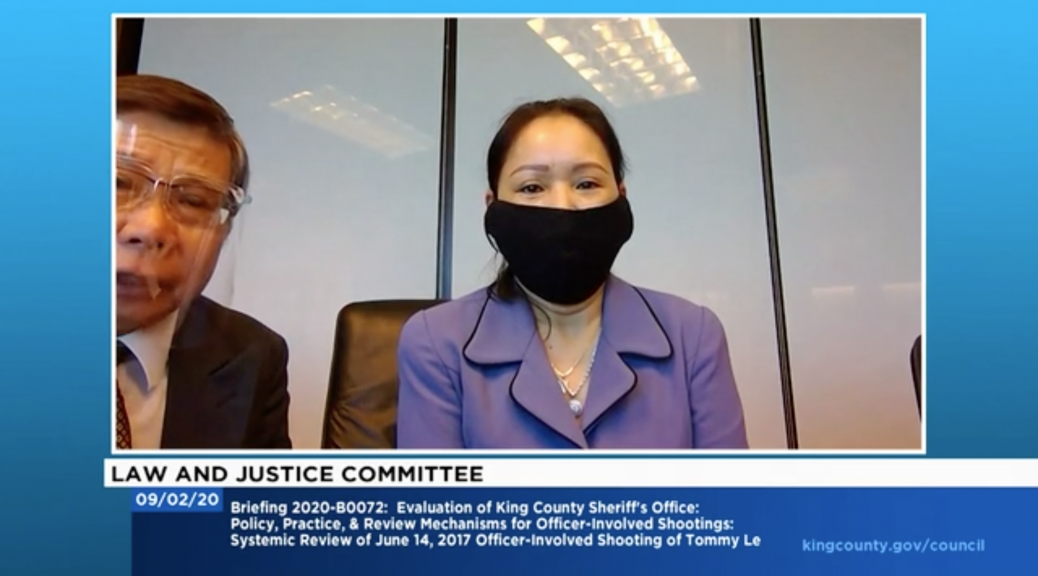 Among its many critiques of the way in which the King County Sheriff’s Office (KCSO) handled the 2017 shooting death of Tommy Le — including the “unsettling” lack of accountability — the King County Office of Law Enforcement Oversight (OLEO) said that the newly released report it commissioned on the shooting and bureaucratic aftermath found that “[t]he Sheriff’s Office went to extraordinary measures in its investigation to advance the theory the Le had a knife at some point in the encounter.”

“Deputies went to Le’s home, collected a variety of kitchen knives, and showed them to witnesses to potentially identify. This occurred despite no evidence that Le had taken a knife from his home or returned home to deposit a knife prior to interacting with deputies after his initial encounter with the civilian witnesses,” according to an email covering the highlights of the report. “In subsequent press releases, the Sheriff’s Office included pictures of knives taken from Le’s home that were never connected to Le on the day of the incident.”

On June 14, 2017, King County Deputy Cesar Molina shot and killed 20-year-old Vietnamese American and South Seattle College student Tommy Le, after Molina responded to a 911 call about a man possibly wielding a knife. The supposed knife was a plastic pen — but the report found that the KCSO went to remarkable lengths to determine whether Le had a knife and whether he had acted aggressively towards civilians, according to KUOW’s advance story on the report.

Presented at the King County Council Law and Justice Committee meeting on Sept. 2, the report by independent police oversight organization OIR Group made a total of 29 recommendations, based on what the email said were “identified shortcomings in the King County Sheriff’s Office (Sheriff’s Office) handling of the matter.”

In addition to the recommendation that the KCSO retract the statement in which it said that use of deadly force against Le was justified, and that should a similar situation arise in the future “with an individual known only to be holding a plastic pen, then the deployment of deadly force could well be the result,” OIR Group addressed a number of other shortcomings, including that the review board failed to consider Le was likely running away, when Molina shot him; the size difference between Le and Molina; and what the email called “inappropriate” makeup of the voting membership of the Critical Incident Review Board (CRIB), whose six members include a King County Police Officers’ Guild representative as well as one of the Sheriff’s Legal Advisors.

King County Sheriff Mitzi Johanknecht pushed back against the OIR Group’s report and OLEO’s findings in a written statement to the committee. In the statement, which she said was a brief precursor to a more thorough response to the report, Johanknecht said that “[t]here are factual disputes” over the shooting, which she expects may be “resolved in litigation,” and that the report and its recommendations are “based on an outdated policy and [the report] fails to accurately present a holistic view of our current processes and positive changes made well before the issuance of this report.” She said the report gives the “false impression that the KCSO is unresponsive and uninterested in evaluating its actions.”

Johanknecht listed several of these alleged inaccuracies, which include some policy and procedure changes made in the years following Le’s death. The changes include updating its use of force policy; implementing the post-Initiative 940 Law Enforcement Training and Community Safety Act; separating the KCSO Administrative Review Team from its Internal Investigation Unit; updating the KCSO’s deputies’ Taser models; and issuing extra first aid materials.

However, none of the changes in Johanknecht’s brief review letter appear to address several major issues both the OIR Group report and OLEO raised, including that the KCSO asserted that use of deadly force in a future situation like Le’s would still be justified. In other words, if another deputy were to believe another young person’s plastic pen was a knife, it appears that the KCSO would still consider its deputies using deadly force to be a justifiable action. Rather than ruling out deadly use of force in such a situation, the letter appears to skirt the issue, saying that the “CRIB (former Force Review Board or FRB) now considers and answers specific questions including whether the member’s choices leading up to the event were sound and whether there were reasonable alternatives to the use of force.”

Johanknecht’s statement also did not directly address the “extraordinary” lengths to which the OLEO alleged the office went to try to find proof that Le had a knife. Instead, she said that she understands “how certain decisions about the release, or omission, of information to the media just after the shooting in 2017 undermined public trust,” and that she “cannot explain nor answer why those decisions were made by the previous sheriff.”

In a press statement to OLEO, Le family attorney Jeff Campiche called the KCSO’s handling of Le’s shooting a “deliberate cover-up of the truth.”

“The report states what the family has known from the beginning: ‘Their son wasn’t lunging at Deputy Molina with a knife in his hand when he was shot. He was running away from Molina, and his hands were empty as witnesses clearly saw,’” Campiche said in the statement. “It’s time for the KCSO sheriff – and King County Executive Dow Constantine – to take decisive action to correct the conspiracy of silence that promotes the cover of the truth in officer shootings.”

Le’s family also contributed to the statement, saying that King County “still hides behind untruths and concealment of the facts,” a move they deemed “unacceptable in this time of social unrest about police violence on people of color.”

“The people of this state no longer tolerate law enforcement covering up the unnecessary use of deadly force. We fled Vietnam decades ago, to America, because we believed that we would be save[d] from government oppression in the United States believing that the US had the best justice system in the world,” the Le family said in the statement. “King County can no longer hid[e] the truth. We are patient people committed to obtaining justice. The publication of the truths contained in OLEO’s report is another giant step in the path of justice for Tommy Le.”

In addition to the family’s collective statement, Le’s mother, Dieu Ho, and his father, Hoai Le, also addressed the King County Council through an interpreter at the Law and Justice Committee meeting.

“I miss my son so much. He was such a nice boy, and never caused trouble or did anything to anybody,” Ho said. “He is gone now. I am at a loss of words right now. I would like to ask for help, assistance, from everybody to help my son, to bring justice to him, to bring out the truth about his passing away.”

Ho paused to collect herself, and then continued: “I think about him all the time. I miss him so much. I don’t know what else to say.”

Hoai Le said that the past three years have been “a long time for our family.”

“Every day, my family is hurt every day, when it comes to our son’s loss,” Hoai Le said. “Everybody knows that we lost our son, without knowing the truth of his loss — it’s been three years, a long three years.”

Carolyn Bick is a reporter and photographer based in South Seattle. You can reach them here and here.

Featured image is an image of Dieu Ho in a screenshot from the King County Council Law and Justice Committee meeting on Sept. 2, 2020.