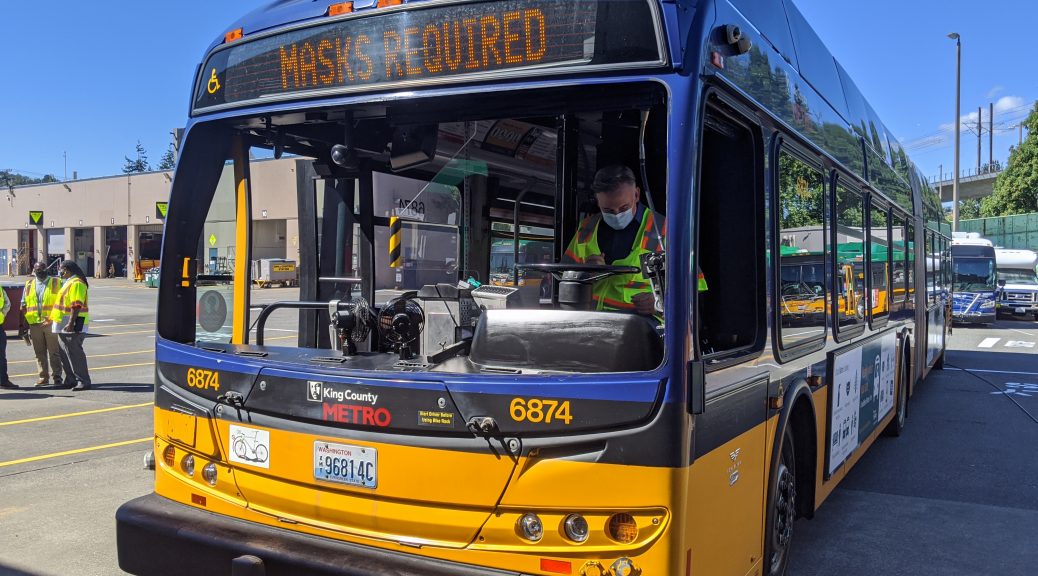 On September 2, King County Metro announced the “Ready When You Are” campaign, which features innovations for transit, including automated plexiglass partitions and mask dispensers to keep operators and riders safer during COVID-19. County leaders, including Executive Dow Constantine and representatives from Metro and the Amalgamated Transit Union (ATU) local 587, presented the improvements at the Metro Component Supply Center in Tukwila. The transit additions coincide with new and improved bus routes coming September 19, and are in preparation for restoring fares on October 1, although that date is not set in stone.

“I am here to announce that King County Metro is ready to serve,” Constantine said. “Ready to get you where you need to be. Ready when you are, which happens to be the name of our new campaign as we turn the corner and fully adapt to the new normal.”

He went on to add, “This is in some ways a new Metro, but with the same commitments to customer service, ensuring that each King County resident has access — access to jobs, to education, to everything this region has to offer.”

At the beginning of the COVID-19 outbreak, King County Metro found itself in dangerously unprecedented territory, with few examples to turn to. Metro Interim General Manager Terry White described the beginning of the County’s pandemic: “We were the first organization who had to figure it out. There was no one for us to call. In fact, I was getting phone calls from Canada, from New York, as they were trying to figure out what they should prepare for.”

On March 12, Metro ceased all front-door boarding and stopped fare collection in hopes of reducing contact between operators and riders. Metro vehicles are disinfected daily, masks are required on all transit, and physical distancing is enforced by permitting only 12 or 18 riders at a time, depending on the size of the bus. More busses have been added to serve busy routes. Sadly, two Metro operators died of COVID-19, one in April and another in June. In an effort to further protect operators, plexiglass safety partitions were designed, fabricated, and tested in-house at the Component Supply Center.

The plexiglass partition swings into position when the front door opens, shielding the operator from the onboarding rider. Once the coach is in motion the plexiglass swings back, acting as a barrier between the operator and the rest of the coach. There are eight different designs for the plexiglass partitions to accommodate differences in Metro coaches. All allow the rider to access the fare box and don’t compromise accessibility for riders in wheelchairs. The automated partitions cost $3,200 each, almost half the cost of a comparable door from an outside company. Funds from the CARES Act will go towards equipping all 1,400 coaches with these permanent partitions.

Constantine explained that the barriers “allow for a safe return to front door boarding and fare collection, which we are targeting to begin on the first of October,” although Metro noted the date could be subject to change.

Along with the automated plexiglas partitions, mask dispensers will be installed on Metro coaches just behind the operator, convenient for riders boarding from the front. One million masks are available to Metro with funds from the King County Council. Dispensers will be installed first on high-ridership routes this month, including RapidRide A and F lines in South King County. According to County Councilmember Jeanne Kohl-Welles, the free masks will help both operators and riders. “We understand the danger and the risk for the driver to have to control everything on the bus,” she said. “Having dispensers on the bus with masks available should go a long long way to make sure that people are wearing masks.”

With Metro’s new changes in mind, and in preparation of resuming fare collection, Constantine urged all King County residents to obtain an ORCA card or ORCA LIFT card, the latter is a reduced fare pass for low-income riders. He noted the Metro Customer Service Center at King Street Center reopened on September 1, ready to help issue ORCA passes. “The Orca card expedites boarding [and] makes it safer for everyone,” Constantine said.

Metro’s new improvements help transit operator Zelda Ivy feel more confident providing service to King County. “The barrier development, design, and the concept is right in line with what the drivers were asking for, and King County was asking for, and what ATU was asking for. It’s perfect, it provides the protection, the airflow, the visibility and ability to engage with our passengers. We get to see them in the rear view mirror but now I get to say ‘Hello. We’re ready for you, Welcome aboard.’”

Find out more about how to obtain an ORCA card or enroll in the ORCA LIFT program here.