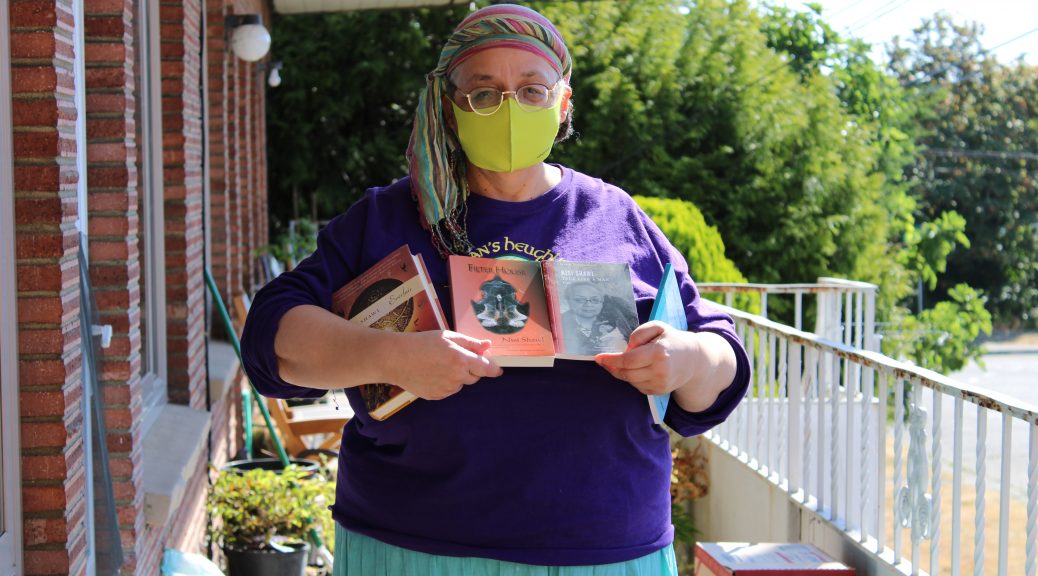 In the Wizard of Oz (or The Wiz, if you grew up Black like me in the ‘80s) Dorothy’s ruby-red slippers could transport the wearer to anywhere in the world. Three taps and “poof” you’re back in Kansas. It’s that same magical spirit that science fiction writer Nisi Shawl taps into in their numerous tales of utopia which transport readers to future versions — better versions — of our world with just a turn of the page.

“I think that writing was the closest that I could come to being a magician, which is what I really wanted to do, you know — transform the world,” Shawl said.

A winner of the 2020 Locus Award, a 2016 Nebula Award nominee, and the 2008 James Tiptree, Jr. Award winner, Nisi Shawl has been transporting readers to better worlds since they first published their short story “I Was a Teenage Genetic Engineer” in Semiotext(e) in 1989. They said that they want to write fiction from a place of hope, using “compelling and realistic visions” of a better world. When I asked Shawl during our telephone interview exactly what a better world would look like, their answer intrigued me.

“I would say it would likely be some sort of socialism,” Shawl said. “The book I’m working on now, “Kinning,” is the sequel to my first novel, “Everfair.” In it there are these Chinese anarchists running around in 1920 trying to get people to consume this plant material that causes empathy.” They paused and gave a mischievous laugh. “So I think it would be a very empathic world.”

In Shawl’s vision of the future, people would treat each other like extended family. And in a healthy family there is empathy — people care about what is happening to each other. “Kinning” will explore the process of making kin out of people who have no biological ties and who may even be oppressive. That surprised me. I wanted to know why Shawl believes it is important to make kin out of strangers — even an oppressor.

“Well, because when we make an in-group, a lot of times we do that by making an out-group,” Shawl said. “And that divides not just the world but our own selves. So to be whole selves, we need to be a more embracing community. We need to be a more inclusive community. … Sometimes inclusion can come to [oppressors] as unwelcome, which is another thing I’m trying to deal with in this novel. It can be overwhelming to be brought into a community that you have been trying to suppress.”

Shawl believes that bringing an oppressor “into community” is critical because, “Otherwise they will continue to try and suppress you successfully or unsuccessfully. They will keep trying.”

But how exactly do you “neutralize an enemy”? The answer to that is something explored in the short story “The Water Museum” which is a part of Shawl’s collection of short stories, “Filter House,” and was recently featured on LaVar Burton’s podcast.

The cultivation of better worlds isn’t limited to Shawl’s fiction; it’s a lifelong journey to improve representation and diversity in the science fiction writing community. In 1997, Shawl helped found the Carl Brandon Society, an organization committed to “addressing the representation of People of Color in the fantastical genres such as science fiction, fantasy and horror.”

Shawl says that the reason the Carl Brandon Society exists is to give People of Color an opportunity to add their voices to the conversation about what our world’s future could/should look like. For Shawl’s part, it’s a world more hopeful than dystopian.

“There’s an idea that science fiction, fantasy, and horror — that all speculative and imaginative writing is a form of thought experiment,” Shawl said. “So you try to come up with a way in which the world is different and work out all of the ramifications of a change. Some of the changes in a story are based on fear. Some are based on hope. Some are completely neutral and then depend on the reader for the inflection. But I try to go for the stories that are based on a hopeful take on the world and an optimistic one.”

And that optimism has fueled many of the changes that Shawl has experienced since the late 90s, a time when there were so few Black and POC science fiction writers getting published that Nisi could personally greet each one at the science fiction conventions they attended each year.

But now, when someone wants a tally of POC science fiction writers, dozens of names can be listed — writers who are published with legacy publishers and small presses as well as self-published authors. It’s the kind of result that makes Shawl hopeful for the future. But there are some drawbacks: as the number of successful Black and POC science fiction writers have ascended to prominence, fame, and recognition, racism driven by fear has emerged.

Shawl spoke of how science fiction and fantasy writer N.K. Jemison was called a “half savage” after winning multiple Hugo Awards for her writing.

“She’s popular. She’s selling novels and short stories and she’s not alone,” Shawl said. “She’s part of the movement, and that’s threatened to some people.”

Shawl said that for some authors, the large influx of Black and POC writers into the science fiction community threatens their profits. The racism emerges because they fear that “if people are buying copies of that, then they’re not buying copies of someone else’s stuff that is not part of that movement,” Shawl said.

But newcomers shouldn’t let the racism scare them away. A lot of progress has been made and the future is looking brighter for Black and POC writers. Shawl expressed gratitude for the white allies in the community who are working every day to make the science fiction industry more inclusive at all levels.

As for new writers who want to break into the industry and maintain a career, Shawl has some advice:

Shawl recounted their experience when they wrote about someone kissing “the kitchen” of a character and an editor said, “nobody knows what you’re talking about.” But “the kitchen” is well-known in many African American communities to be the place between a person’s hairline and their neck.

Shawl said that in these situations, it’s important to “listen to your editors but also consider their bias” and choose your battles wisely. In that case, Shawl defended the line and kept it in, but there may be cases where it’s not worth a fight.