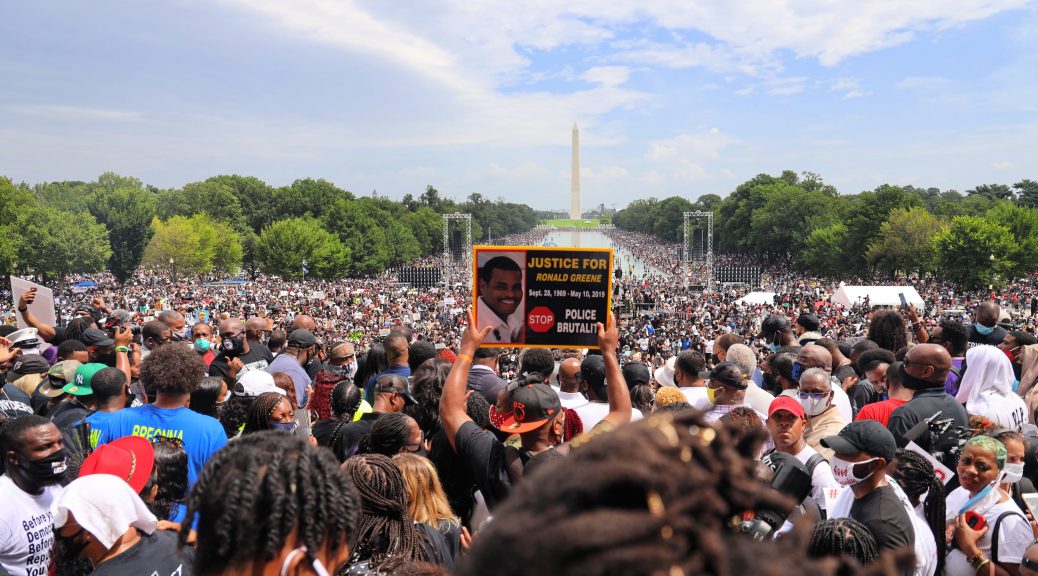 by Tiametta Zoe (words and photos)

“‘When will you be satisfied?’ We can never be satisfied as long as the Negro is the victim of the unspeakable horrors of police brutality.’’

Dr. Martin Luther King Jr. spoke those very words 57 years ago at the Lincoln Memorial in Washington, D.C. during the March on Washington. The impact of this historical event will never be forgotten.

Attending the 2020 edition of the March on Washington two weeks ago was both transformative, empowering, and disheartening for me. While it was an honor to be amongst prominent Black leaders of our time, to see thousands on thousands of people congregate together for this movement, and to see the families of George Floyd, Breonna Taylor, Eric Garner, Jacob Black, Trayvon Martin, and many others, it was a conflicting and quite heavy experience to know that this fight still continues, and the pain and the sadness in the eyes of the families was unbearable. No family should have to live to see their child, sibling, or family member killed unjustly in the name of hate. This ignited my desire for justice even more, despite the traumatic effects of this movement and the continual shootings and killings of Black people.

Though my trip to D.C. was a magical and transformative moment for me and many others, it did take its mental toll on me. I want to discuss my experience in Washington, D.C. and some of the issues we are currently facing in this movement, such as internalized racism and colonization, in the context of mental health. This is a subject I’ve been reluctant to talk about because I did not want to come across as weak or to fuel the cynicism of anti-Black people who are praying for the demise of this movement. But since this is a platform for the Black experience, I will keep my focus on just that.

What I learned from D.C. is that this fight is just as much internal as it is external.

This brings me to the subject of internalized racism and the notion of being colonized and brainwashed. There were a lot of Black cops on the frontline of the protest in D.C. The view of this was like an elongated scene from Jordan Peele’s movie “Get Out,” a thriller in which Black folks are hypnotized and then possessed by the deceased family members of a white family. The white family’s matriarch uses hypnosis and false empathy to reach the main character’s subconscious, where she plants her seed of influence. Despite Chris, the main character, noticing a plethora of red flags leading up to the event, he lets his guard down and gives in.

This is exactly what I saw at the march. There was a glare in these Black cops’ eyes — a denial masked by guilt and confusion that somehow they got caught up in a system and were positioned to fight off the very things that would empower them, their families, and their descendants.

This was a complex observation to unpack because it was a direct contradiction to what this movement is about. I wasn’t sure if there were so many Black cops in the department due to the large Black population in D.C. if it was an intentional ploy to appear to “help” the community, or if it was a way for the police to exercise hierarchical power within the Black community. I’m still not sure, but regardless, it was not a good look.

I did notice a subtle difference between cops in D.C. and Seattle, and I’m not sure if this was because most of the cops were Black or if it was the D.C. way, but they seemed to engage in more dialogue than what I’ve experienced here in Seattle. Many Black protestors, like myself, wanted to understand the Black officers’ motives behind becoming cops. One of the answers that I heard and received included that they wanted to help people, and I could hear the shame, guilt, and embarrassment in their voices. This was very conflicting for me because I was both angry at them and also a part of me genuinely felt heartbroken for them because they got lost in the sauce. I don’t think they fully conceived how they were contradicting themselves, because we were at the very scene where people were being pepper sprayed, shot with rubber bullets with wounds wide open, gassed, and being dragged on the street and arrested. This is something that I am still unpacking.

If we are not careful of the systems that we are entering and conscious and intentional of the role we are playing in them, we inevitably become the system. Despite the cops’ actions, I feel a weird sense of sadness for them. I also know that they have to be accountable and muster up the courage to look beyond a paycheck, a title, or whatever it is that is motivating them to be on the frontlines of protests and perpetuating this violence and cruelty toward Black people. This thing called white supremacy is contagious, it is real, and it comes in many forms within our community.

I want to reiterate what others have said: that the criminal justice system was never made for Black people — period. We have to talk about the Black trauma, the internal recycling of racism and white supremacy, and the mental toll of this movement. Black mental health, Black psyche, and the Black spirit need to be addressed and cared for, as we are recovering from centuries of oppression, and none of us are really immune to the effects of that without first consciously being aware of how we have contracted it.

Though this is a very complex subject that needs to be explored further, I believe mental health and self-awareness can be the start. Addressing Black mental health will also help sustain the movement. Being active in the Black liberation movement can be very traumatizing, and if we do not address and deal with our mental health, there is a risk of mental breakdowns and burnout.

I believe there need to be more healing spaces for Black people so that the hope and momentum continues. I once believed that love and partnership were the backbones of this movement, being that love and support can fuel us. But after my trip to D.C., I realize there is much more to this equation. I realized how important a healthy Black psyche is and how imperative it is to us being effective and having the stamina, willpower, and grit to continue this fight — because it is not over and we must not give up. We are dealing with ancestral and present traumas, and there need to be mental check-ins so that we don’t check out. There needs to be a call for Black mental health workers, Elders, and Healers to come forward, and perhaps we can help create healing spaces that operate continuously and sustainably for the growth and healing of Black people.

Lastly, let’s never forget their names. I am hoping for a quick recovery and justice for Jacob Blake justice, for all the ones we have lost and are currently losing, and justice for all the victims of police brutality, racism, hate, patriarchy, and oppression.

Time is up. The reckoning is coming.

Tiametta Zoe is a local photographer, videographer, artist and writer. She considers herself a Love Warrior and enjoys playing the guitar very much. Find Tia on Instagram at Tiametta_zoe.