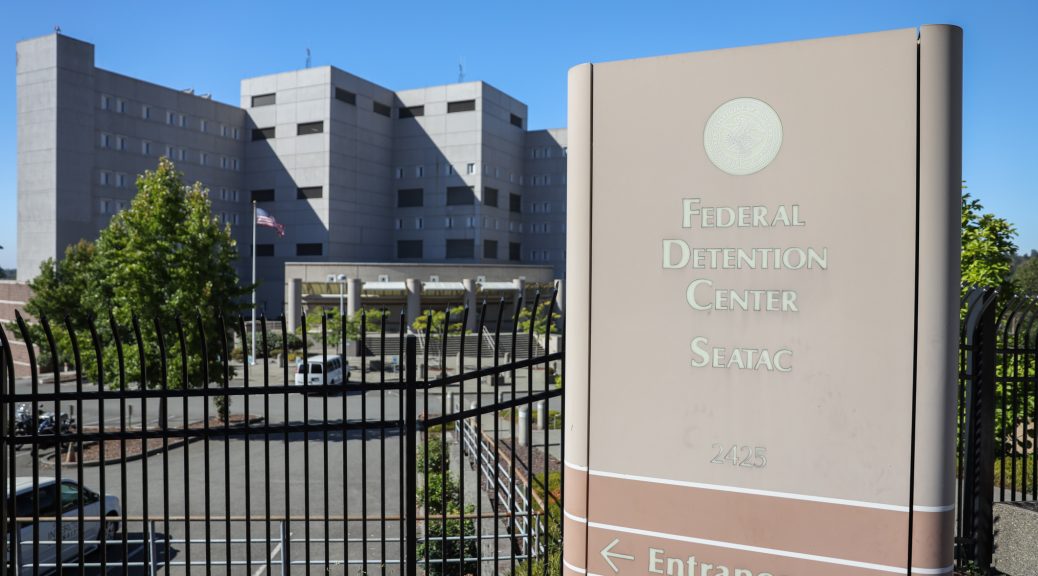 In April, ACLU Analytics and researchers from Washington State University, University of Pennsylvania, and University of Tennessee predicted that if the United States continued to operate jails and prisons as usual and refused to reduce the number of people incarcerated, estimated fatalities from the coronavirus would double. That same month, in Washington state, Gov. Jay Inslee authorized the release of approximately 1,100 individuals nearing the end of their sentences, but organizations like Human Rights Watch believe that this is far too few. Currently, Washington state prisons have been exposed to COVID-19. Washington State Immigrant Detention Centers have been exposed to COVID-19. And now, the Federal Detention Center (FDC), SeaTac has been exposed.

On August 12, according to Oscar Humberto Carrillo Salcedo, who is incarcerated at FDC SeaTac, Corrections Officer (CO) Seward arrived for his shift exhibiting signs of sickness. When asked by inmates if he was all right, he explained that he had a headache, was hot, and was not feeling well. During this period, Seward made his rounds throughout the entire unit regularly. Since this unit was near maximum capacity, the unit was divided into two groups. Salcedo recalls that Seward checked on the group of inmates who remained in their cells while others were passing time in the day room area, all the while wearing his mask halfway off his face, exposing his nose and mouth.

According to Salcedo, by 6 p.m., CO Seward requested to be seen by a medical officer, had his temperature taken, and was confirmed to have a fever. Afterward, he remained at the facility and carried out his entire shift, which ended late that evening. According to Warden Israel Jacquez’s own written letter to Chief Judge Ricardo S. Martinez in April, FDC SeaTac was conducting “daily temperature checks and screenings of all staff prior to allowing them entry into the institution,” which is also a requirement under the Washington Department of Corrections protocols.

But, according to Salcedo, Seward was not sent home as per the current coronavirus protocols and was never screened as Warden Jacquez claims is the procedure.

Salcedo is also the unit’s inmate orderly, tasked with cleaning Seward’s bathroom. “My client wasn’t provided anything extra and was expected to clean after an ill guard came to work,” explains Salcedo’s attorney, Talitha Hazelton, at Smith Law LLC.

According to details provided by Hazelton and Salcedo, all those detained in this unit were in close proximity to one another and free to remain in contact with other inmates for the next three days. By Saturday, August 15th, an inmate in Salcedo’s unit complained of symptoms similar to those of CO Seward, leading to the entire unit being put on lockdown, according to Salcedo.

While in lockdown, Assistant Warden (AW) Green visited the unit in order to answer any questions inmates might have had, but when he was asked why more immediate actions weren’t taken when CO Seward was experiencing symptoms, he was unresponsive, according to Salcedo. When Salcedo expressed concerns about the COs wearing face masks improperly or not at all, he said, “… officers took it in a joking manner and made coughing gestures towards the inmates.”

On August 17, the same day AW Green visited the unit, Salcedo was tested for COVID-19. By August 19, it was confirmed that he had tested positive. He was removed from his unit and placed in medical isolation (MI), which is standard procedure for inmates who test positive for the coronavirus. Eleven other inmates from his unit were moved to medical isolation because they tested positive with the virus as well.

According to Salcedo and his attorney, Hazelton, since Salcedo has been placed in MI, his access to the commissary has been revoked. His access to books or any other reading material has also been revoked. All personal items, including clothes and his radio, have been taken away. All phone privileges have been revoked. Even though Salcedo has regularly requested postage stamps in order to communicate with his attorney and family, he has been repeatedly ignored. “I have not been able to contact my family for the past 21 days,” Selcado wrote in the “Declaration of Defendant” that Hazelton filed on Sunday, September 6th. Salcedo is in MI because he contracted the virus — through no fault of his own. He was not placed in “disciplinary segregation” where amenities like radio and other privileges are taken away.

On August 23, while Salcedo and others were being isolated in MI, a petition filed by Columbia Legal Services that intended to push Gov. Jay Inslee & the Department of Corrections Secretary to take immediate and sweeping actions to prevent the spread of COVID-19 was denied. “On the record presented,” asserted Washington Supreme Court Chief Justice Debra Stephens, “the Petitioners have not shown the Respondents’ actions constitute deliberate indifference to the COVID-19 risk at the Department of Corrections facilities.”

Through the Bureau of Prisons’ (BOP) Compassionate Release Program, and as part of the Coronavirus Aid, Relief, and Economic Security (“CARES”) Act, BOP has had the broad discretion to allow an adequate reduction in the prison population to allow for social distancing. It has the authority to allow people like Salcedo — a 24-year-old college graduate, a young merchant marine, and a new father — a better chance at remaining COVID-19 free. But less than two dozen prisoners are granted compassionate release per year at a time when, of 649 inmates at the Federal Detention Center, SeaTac, 36 inmates have tested positive so far, after half the population was tested.

Meanwhile, Salcedo has been provided no cleaning supplies to keep his cell clean while in MI. “We are forced to live in a dirty cell, and a dirty unit,” Salcedo explains in an August 24th letter to his attorney. “This unit is probably the filthiest in the building. Every unit I have been in has orderlies who constantly clean the day room and showers. We have taken three showers since being placed here and the showers have not been cleaned one time.” Not only was Salcedo denied daily showers, he says, but he was also denied clean clothes. “I’ve been in the situation for almost a week,” Salcedo writes, “and have asked for clothes daily, just to be denied.”

It is unclear at this time whether he has received clean clothes or how often. According to Hazelton, Salcedo was only able to send a letter to his attorney on August 24th because he had the chance to obtain a stamp from another inmate.

“The laziness and carelessness of the staff are putting my life in danger,” Salcedo writes. “I’ve been in here (MI) with no property and no clothes, waiting. Waiting to see if my body fights off COVID-19, waiting to die, waiting for change to happen.”

Hazelton also filed an Emergency Motion for Compassionate Release on Sept. 6th on Salcedo’s behalf. In it, Salcedo explains that only after more than a week of MI did the medical staff come in to check in on Salcedo’s condition. During this singular visit, he writes, “Medical staff failed to provide any additional means for us or get better, to improve our well-being, or to simply alleviate the agonizing symptoms of COVID-19.”

The Federal Bureau of Prisons has the second highest rate of total COVID-19 deaths among prison systems in the country, according to The Marshall Project. Salcedo is a non-violent offender with no criminal history and thus is not considered a threat to public safety. According to the ACLU, releasing prisoners like him may save lives while saving taxpayers money.

For Salcedo, all he wants is to live — and to see his family again. “My dream and promise is to start all over; to see my son grow up; to be there for my fiancée and help her raise our son so she is not alone during such a difficult period; to take care of my parents, who are only getting older; to be there for my younger sisters.”

Note: The South Seattle Emerald has reached out to FDC SeaTac regarding these allegations but has not yet received a response. This article will be updated upon FDC Seatac’s response.

Update (9/8/20): Request for comment from FDC SeaTac Warden Jacquez was denied by the Bureau of Prisons. Bureau of Prisons’ Office of Public Affairs representative, Emery Nelson, responded via email declining to comment about the conditions of confinement for any particular inmate or group of inmates, or the medical condition of a specific staff member, “for privacy reasons.”

Luna Reyna is a South King County-based journalist. She is deeply invested in shifting power structures and centering the work and voices of marginalized communities. Whether she is investigating the impact of environmental racism or immigration as a movement journalist, or interviewing an artist whose work sheds light on the casualties of war as an arts journalist, or covering restorative justice efforts as a self-described “Cannabis Chronic-ler,” her work is in service of liberation and advancing justice.