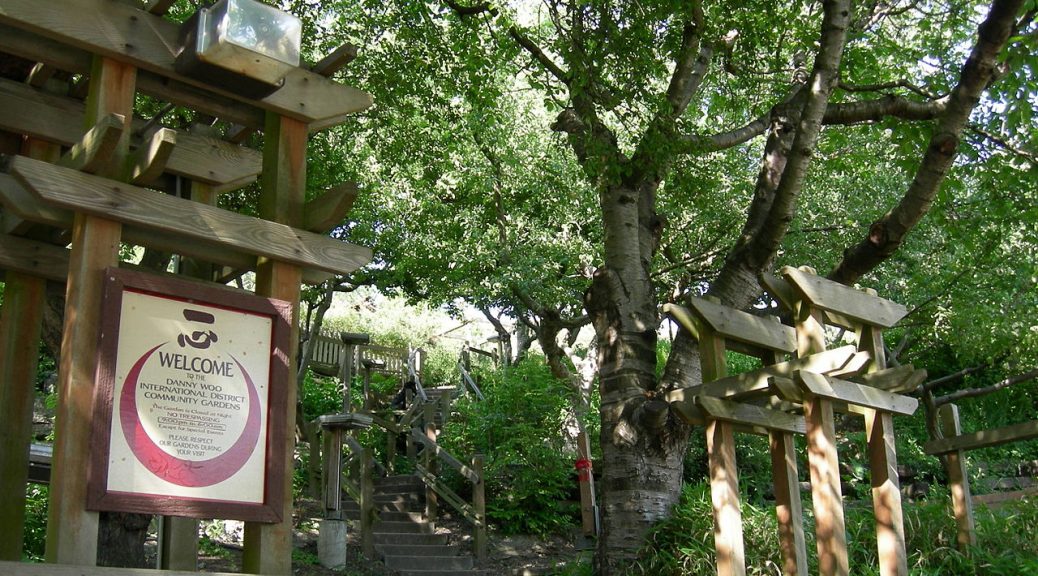 The Danny Woo Garden Show is a new weekly show livestreamed on Facebook that teaches preschool- and kindergarten-age kids how to grow their own vegetables while learning about plants, science, and culture.The interactive show, which launched August 26, is filmed live from the Danny Woo Community Garden every Wednesday from 10 a.m. to 10:30 a.m. Garden volunteers host games and present lessons on plant and animal life cycles (like chickens). Kids and their families are encouraged to type comments and questions in the chat during the show.

In addition to the live chat, families who signed up before the show’s launch were able to pick up seed kits from the garden. The kits included cups, soil, and seeds for bok choy, cilantro, and snow peas, foods relevant to the Asian American and Pacific Islander elders who grow food in the garden. In the first show, kids planted their seeds in the cups at home while the show hosts planted the same seeds in the garden.

“We gave them seeds, soil, and different cups for them to grow the seeds in, so they’re growing them along with us at the same time,” said Andy Allen, garden show host and former Maple Elementary School teacher. “Each week we’ll check back on the plants and see how they’re growing and then ask the kids how theirs are growing.” Seeds and supplies were purposely intended to be easy-to-get for families joining in later without a pre-packaged kit.

Located in the Chinatown/International District (CID), The Danny Woo Community Garden, a program of the Interim Community Development Association, includes nearly 100 gardening plots, a children’s garden, chicken coop, outdoor kitchen, and fruit tree orchard. The garden was established in 1975 after activists, including Filipino-American “Uncle Bob” Santos, secured the 1.5-acre hillside from businessman Danny Woo, leasing the land for a dollar per year. In the 1960s and 1970s Santos and other activists were rallying support around the CID, protesting against developments that would harm the predominantly Asian and Pacific Islander community and advocating for affordable housing and other essential services. After hearing that elders in the CID wanted a place to plant and grow vegetables, Santos approached Woo about repurposing the hillside property for a community garden. The Danny Woo Community Garden has been an important part of the CID ever since.

Pre-COVID-19, the garden offered children’s programming up to four days a week with El Centro De La Raza, the Chinese Information Service Center, and teen program Wilderness Inner-City Leadership Development (WILD) by Interim. Since WILD is about leadership development and community as well as environmental education, the program was adaptable to an online format as the pandemic restricted in-person gatherings. But Allen, a garden volunteer on sabbatical from his teaching position, noticed that programming for younger kids had stopped during COVID-19. He approached Lizzy Baskerville, Interim’s Environmental Design and Sustainability Manager of the garden, with the idea to do an online show.

“It hadn’t occurred to me until Andy had the idea [of doing] a show that we could do remote learning with little ones. So much of our programming is centered around teaching them about themselves in relation to each other, the physical and cultural space of the garden, and being immersed in nature,” Baskerville explained.

Allen met with Baskerville and Eliza Guan, Interim’s Nutritional Education & Food Security Manager to pitch the idea of an online garden show. Baskerville was enthusiastically on board. “[It was] Just like my PBS childhood come to life,” she said.

Baskerville, Allen, and Guan also enlisted the help of Interim’s Sustainability and Education Coordinator Abby Frias, and constructed a six-week curriculum to be filmed on Facebook Live at the garden every Wednesday. Allen hosts the show along with Frias who also contributes artwork, while Guan films and Baskerville acts as producer.

The shows have four parts, starting with a treasure hunt in the garden. Kids are encouraged to type — or have their parents type — what they see. The show hosts acknowledge comments in the chat by reading them aloud. The second part of the show is Green Corner where the hosts check on the vegetables planted in the first show, comparing notes with kids’ plants at home. and teaching about what makes plants grow. Chicken Time follows, when young viewers engage with the garden’s chicken coop. During the first show, kids were asked to help name the chickens. “We got some fun names,” Allen said. “One kid wanted to name the white chicken Chocolate. We had another kid name another one Break Dance Chicken. We’re trying to get them to interact as they would in real life. The comments have been really fun.”

The show concludes with Sharing Time, which could include the hosts reading a book or singing a song. In upcoming weeks the show hosts plan to do interviews with some of the elder gardeners, who are respected in the mostly immigrant community. “We’re talking about what plants need to grow, so what better way than to ask some of these experienced gardeners what are their secrets to growing plants really well,” Allen said.

Of the show’s online audience, Baskerville said, “We have a diverse pool, mostly families of color, but we primarily serve APIA community in the Danny Woo community garden. Bringing the elder gardeners into the show in the next few weeks [creates] this intergenerational piece. Our gardeners are from mostly China, Korea, and Vietnam, I think learning from them will be a huge part of that.”

The Danny Woo Garden Show will run until the end of September. Older shows can still be accessed on the Danny Woo Garden Facebook page, so kids joining at a later date can watch the shows they missed. This also means a wider viewership than what would be possible with in-person programs. For example, before the show’s launch, 30 families signed up for seed kits, but the first show had 360 viewers.

“We’ve been able to reach so many more people through the show. So far the response has been great. I hope this can continue after the six weeks,” Baskerville commented. “I’m hopeful that maybe we can get some momentum going and continue it after the fall, maybe in the spring.”

Aside from continuing the show, Baskerville ultimately hopes it will inspire more kids to get curious about gardening, get outside, or even visit the Danny Woo Community Garden themselves. “One hope of increasing interest in the Danny Woo Garden is to not only bring in more interest and engagement to the garden but to the CID which has been hard hit by COVID-19,” Guan said.

Families are encouraged to visit the garden anytime, but staff and volunteers are available Tuesday and Thursday from 10–2 p.m. COVID-19 protocols include wearing face masks, capping the number of volunteers, and maintaining social distance in the garden.

You can watch the show on Facebook Live for free every Wednesday until the end of September on the Danny Woo Community Garden Facebook page.

Featured image is by Joe Mabel and is under a CC BY-SA 3.0 license.